Senior officials from the Middle East and Europe started arriving in Lebanon Saturday in a show of solidarity with the tiny country that suffered a deadly blast this week which caused large-scale damage to the capital Beirut.

The visits by the head of the Arab League and the European Council president come as the country braced for large anti-government protests amid popular anger against Lebanon's political leadership. The country's ruling class, made up mostly of former civil war-era leaders, is blamed for widespread corruption, incompetence and mismanagement that contributed to Tuesday’s explosion.

The blast killed 154 people, wounded more than 5,000 and laid waste to the country’s largest port and nearby areas. 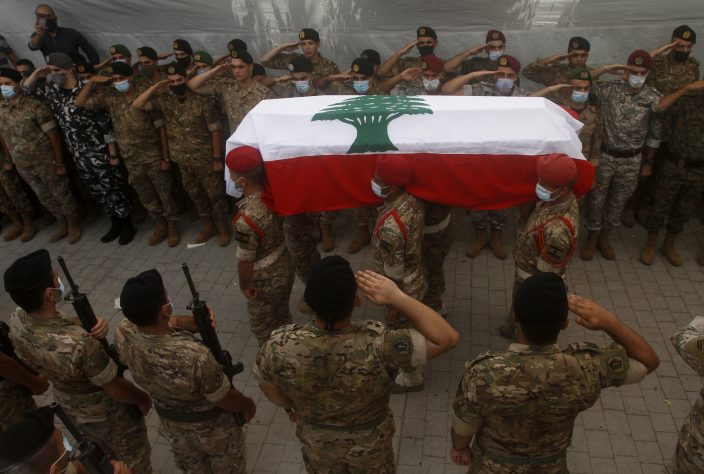 Lebanese army soldiers carry the coffin of lieutenant Ayman Noureddine, who was killed by Tuesday's explosion that hit the seaport of Beirut, during his funeral procession, in Numeiriyeh village, south Lebanon, Friday, Aug. 7, 2020. Rescue teams were still searching the rubble of Beirut's port for bodies on Friday, nearly three days after a massive explosion sent a wave of destruction through Lebanon's capital. (AP PhotoMohammed Zaatari)

The explosion of thousands of tons of ammonium nitrate stored at the port, apparently set off by a fire, was the biggest in Lebanon’s history and caused an estimated $10-15 billion worth of damage, according to Beirut’s governor. It also left hundreds of thousands of people homeless.

The blast came at a time when Lebanon is passing through its worst economic and financial crisis in decades making it difficult for many people who had their properties damaged to fix them.

Documents that surfaced after the blast showed that for years officials had been repeatedly warned that the presence of 2,750 tons of ammonium nitrate at the port posed a grave danger, but no one acted to remove it. Officials have been blaming one another since the explosion and 19 people have been detained including the port’s chief, head of Lebanon’s customs department and his predecessor.

“We will support Lebanon through all available means,” Ahmed Aboul Gheit, the secretary-general of the 22-member Arab League told reporters after meeting President Michel Aoun on Saturday morning. Aboul Gheit said he would take part in a donors conference for Lebanon in France on Sunday and convey Lebanon’s demands to the international community.

At the site of the blast in Beirut’s port, workers were still searching for dozens of people who have been missing since Tuesday. Bulldozers were also seen removing debris near the giant grain silos that are still partly standing.

International aid has been flowing to Lebanon for days and several field hospitals have been set up around Beirut to help treat the wounded.

President Donald Trump said Friday that he had spoken by telephone with Aoun and French President Emmanuel Macron, who paid a flying visit to Lebanon on Thursday. Trump did not mention the investigation, but noted that medical supplies, food and water were being sent from the United States, along with emergency responders, technicians, doctors and nurses.

The ammonium nitrate, a chemical used in fertilizers and explosives, originated from a cargo ship called MV Rhosus that had been traveling from the country of Georgia to Mozambique in 2013. It made an unscheduled detour to Beirut as the Russian shipowner was struggling with debts and hoped to earn some extra cash in Lebanon. Unable to pay port fees and reportedly leaking, the ship was impounded.

In 2014, the material was moved from the ship and placed in a warehouse at the port where it stayed until the explosion.

The San Diego Padres are returning ...