Thousands of demonstrators thronged the streets near the official residence of Prime Minister Benjamin Netanyahu in central Jerusalem on Saturday night, in a renewed show of strength as weeks of protests against the Israeli leader showed no signs of slowing.

Throughout the summer, thousands of Israelis have taken to the streets to call on Netanyahu to resign, protesting his handling of the country’s coronavirus crisis and saying he should not remain in office while on trial for corruption charges. Self-employed workers whose businesses have been hurt by the economic crisis also joined Saturday's march.

Though Netanyahu has tried to downplay the protests, the gatherings only appear to be getting stronger. 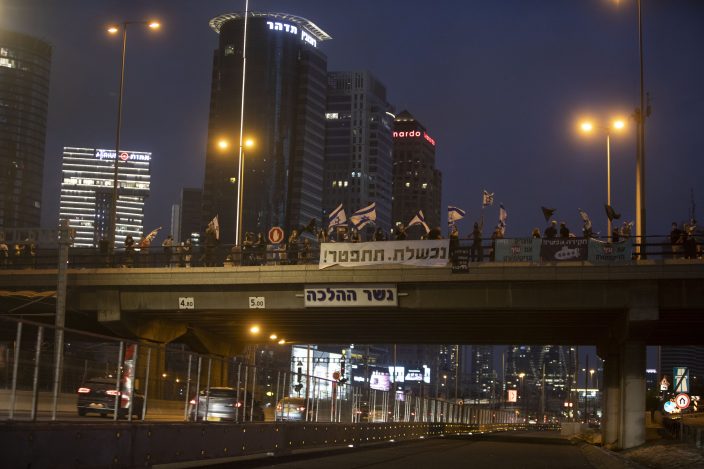 In Jerusalem on Saturday, protesters held Israeli flags, blew horns and chanted slogans against Netanyahu. Some held posters that said “Crime Minister” or called him “out of touch.” A large banner projected onto a nearby building said “Balfour is in our hands,” a reference to the street where Netanyahu lives.

The demonstrators accuse Netanyahu of corruption and say that he and the country's bloated coalition government have failed to recognize the suffering of its citizens.

Israeli media estimated some 15,000 people at the Jerusalem demonstration. An estimated 1,000 also protested at an intersection near Netanyahu's beach house in the upscale coastal town of Caesaria, and smaller gatherings took place on bridges and at intersections across the country. 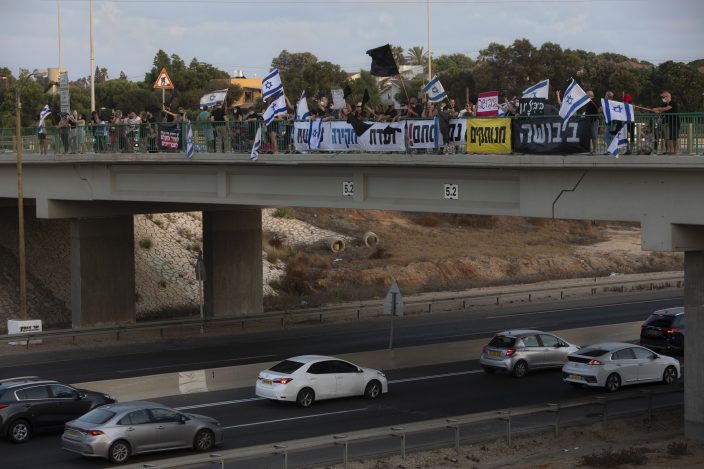 There was a heavy police presence at the demonstrations but no reports of violence in the loud but orderly protests.

The rallies against Netanyahu are the largest Israel has seen since 2011 protests over the country’s high cost of living.

After moving quickly to contain the virus last spring, many believe Israel reopened its economy too quickly, leading to a surge in cases. The country is now coping with record levels of coronavirus, while unemployment has surged to over 20%.

Many of the demonstrators, including many young unemployed Israelis, accuse Netanyau of mishandling the coronavirus crisis and the economic damage it has caused.

Netanyahu’s Likud Party announced that Sunday's weekly Cabinet meeting had been called off because of disagreements with the chief coalition partner, the rival Blue and White Party. The sides have been feuding over the country’s national budget, and if they cannot reach a deal by late this month, Israel would be plunged into an early election.

Likud and Blue and White have repeatedly squabbled since forming a coalition government in May. While Blue and White leader Benny Gantz has defended the protesters, Netanyahu has dismissed them as “leftists” and “anarchists” and inciting violence against him. He also accuses the local media of strengthening the demonstrations by giving them heavy coverage.

Netanyahu's son, Yair, this week caused a public uproar when he described the protesters as “aliens.” Many protesters Saturday dressed up as visitors from outer space to mock the comments.

While the demonstrations have largely been peaceful, there have been signs of violence in previous weeks. Some protesters have clashed with police, accusing them of using excessive force, while small gangs of Netanyahu supporters affiliated with a far-right group have assaulted demonstrators. But recent gatherings have taken place without incident.

The demonstrations, taking place several times a week at locations around the country, are organized by a loose-knit network of activist groups. Some object to Netanyahu remaining in office while he is on trial. He has been charged with fraud, breach of trust and accepting bribes in a series of scandals. Many carry black flags, the name of one of the grassroots movements.

Amid an uproar in Parliament, Indi ...

Israel's Netanyahu rails at media over protests against him

Thousands of protesting Israelis call on Netanyahu to resign