Marcus Semien homered in the first after hitting a walkoff single to end a 13-inning win a night earlier and the Oakland Athletics beat the Houston Astros 3-1 on Saturday for their eighth straight victory.

The three-time reigning division champion Astros lost their fourth in a row. The last three defeats had been by a total of four runs. Semien became the first player in A’s franchise history with a game-ending hit and a leadoff homer on back-to-back days. He delivered some 15 hours after singling home the winning run in the bottom of the 13th of a 3-2 win in Friday night's series opener.

Matt Chapman homered in the eighth and added an RBI groundout in the sixth as Oakland (11-4) matched the 2014 club for the best record through 15 games over the last 30 years.

The rivals each received much-needed long outings from their starters with bullpens depleted. Houston Astros' Alex Bregman, second from right, tags out Oakland Athletics' Mark Canha during a rundown between third and home during the sixth inning of a baseball game Saturday, Aug. 8, 2020, in Oakland, Calif. (AP PhotoBen Margot)

Jake Diekman pitched one scoreless inning of relief. Liam Hendriks surrendered Alex Bregman's one-out RBI single in the ninth before finishing for his fifth save in six chances as the Astros avoided their first shutout.

Houston starter Framber Valdéz (0-2) gave up two runs on seven hits and struck out nine with one walk over seven innings. He threw 103 pitches for the most by a Houston starter this season.

The Astros' bullpen was several pitchers short after the long game Friday. 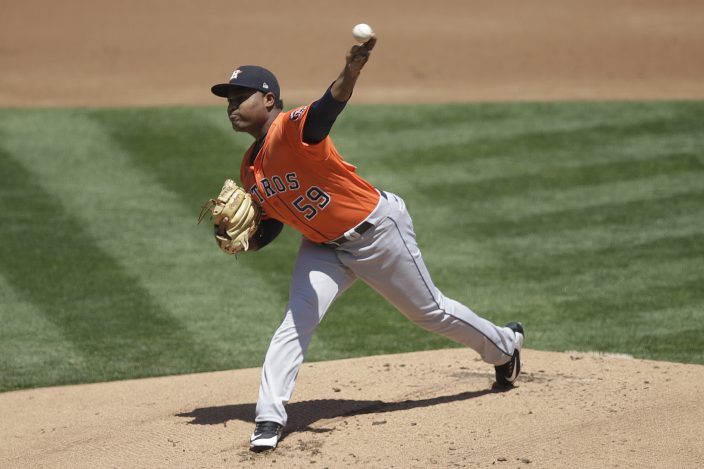 “We're limping right now. Things aren't going our way,” manager Dusty Baker said. “We're not getting any sympathy and don't want any from anybody.”

Zack Greinke had a nice seat between innings of his Friday night start — he sat in the stands, with the cutouts.

“It’s great. Really nice. I would prefer to be able to sit in more places, more spread out," he said. "Right now they kind of have us kind of close to each other in the stands. I just find a way to get a little bit farther out of the way.”

Astros: CF George Springer missed his second straight game after suffering a sprained right wrist diving for a ball during Thursday’s loss at Arizona. "He's about the same, it's only been 12 hours," Baker said. “I know he's Superman, but he's not ready. ... He's not playable.” ... RHP Justin Verlander (Tommy John surgery) isn't progressing as quickly as the pitcher would like, Baker said, but that's just the ace's style considering he “wanted to pitch yesterday,” Baker said.

Jake Odorizzi and the Houston bull ...