Franca Valeri, an elegant, ironic and versatile actor who pioneered female comic roles in Italy's post-war years and helped the nation laugh at its foibles, has died at 100.

The Corriere della Sera newspaper quoted her daughter, Stefania Bonfadelli, an opera singer, as saying that Valeri died in her sleep at her home in Rome on Sunday, nine days after her 100th birthday.

Milanese by birth but Roman by adoption, Valeri will be honored with a wake Monday at a theater in the Italian capital, Rome's City Hall announced. 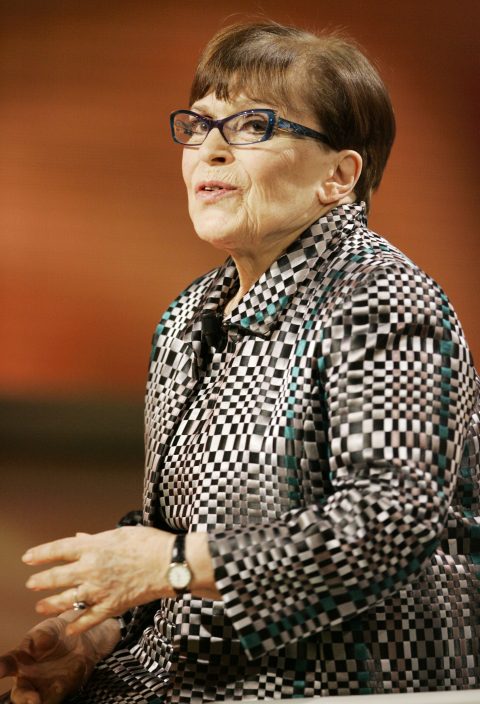 Beloved by Italians, especially for her roles in the 1950s to the 1970s, first on radio, then on TV and in movies, Valeri was recently toasted by many celebrities and in interviews as her 100th birthday approached.

President Sergio Mattarella sent a condolence message, praising Valeri as a “versatile and popular actress who will remain in the hearts of Italians for her great talent and her extraordinary likability.”

Valeri was a sophisticated, intelligent comic interpreter of post-war Italian society and often wrote the scripts or monologues for her performances, especially on stage.

Signature roles featured comic scenes in which she appeared solo, holding a phone, real or imaginary, including as "Signorina Snob,” a role for which she drew upon her Milanese bourgeois roots. Another popular comic character she created poked fun at Roman middle-class vulgarities.

After decades in which comic roles in Italy were virtually the exclusive province of men, Valeri held her own against top male comic actors, starring against Toto' and Alberto Sordi. Of the six films she made with Sordi, arguably her most popular role came in “Il Vedovo” (The Widower), a 1959 hit directed by Dino Risi, a master of Italian comedy films.

Often self-ironic, Valeri once wrote a movie script in which she proposed playing sister roles with Sophia Loren and sent the proposal to Carlo Ponti, the producer who was Loren’s husband.

Italian state TV noted that Ponti responded that the lean, short Valeri couldn’t be paired as a sister with the statuesque, voluptuous Loren, but he adored the script and proposed the two women play cousins, which they eventually did.

In the movie, “Il Segno di Venere” (The Sign of Venus), Loren was the Neapolitan cousin and Valeri the Milanese cousin. “Together they were Italy,” the Corriere della Sera wrote about the movie.

Valeri worked with many of Italy’s leading directors, including Federico Fellini and Mario Monicelli.

Born on July 31, 1920, in Milan as Alma Franca Maria Norsa, she later adopted a stage name, Italian state TV said, in part because her father frowned on her becoming a comic actress.

Valeri was a teenager when Benito Mussolini’s anti-Jewish laws were enacted in 1938. Her father, a Jew, fled with her brother to Switzerland to escape what later would be, under German occupation of Italy, deportation to death camps of many members of Italy’s small Jewish community.

Her mother procured a fake document that declared falsely that Valeri was the illegitimate daughter of an Italian man who wasn’t Jewish, according to the Italian news agency ANSA.

“Papa was Jewish. When he read in the newspaper the news about the racial laws, he cried,″ Corriere della Sera quoted Valeri as saying in an interview. ”It was the ugliest moment of my life,” especially since Valeri was not allowed under the Fascist anti-Jewish crackdown to keep attending school or go to the theater, her passion, the paper quoted her as saying.

Asked in a recent interview about the secret to her long-running success, Valeri replied: “I tried to maintain being classy.”

American right back Sergiño Dest i ...

Flames devoured swaths of brush an ...