House Speaker Nancy Pelosi said Sunday the threats of interference in the U.S. presidential election from Russia and China are not equal, pointing to a more serious risk with Moscow's efforts to boost President Donald Trump’s reelection bid.

“They’re not equivalent,” said Pelosi, D-Calif. “Russia is actively 24/7 interfering in our election. They did so in 2016, and they are doing so now.” She urged intelligence agencies to “put more information out there” on the specific nature of the threats.

An intelligence report last week said Russia was already using a “range of measures” to undercut Trump's Democratic challenger, Joe Biden, and promote Trump with misinformation on social media. The statement Friday by William Evanina, director of the National Counterintelligence and Security Center, also said China does not want Trump to win a second term and has accelerated its criticism of the White House, and that Iran is also hoping Trump will lose. 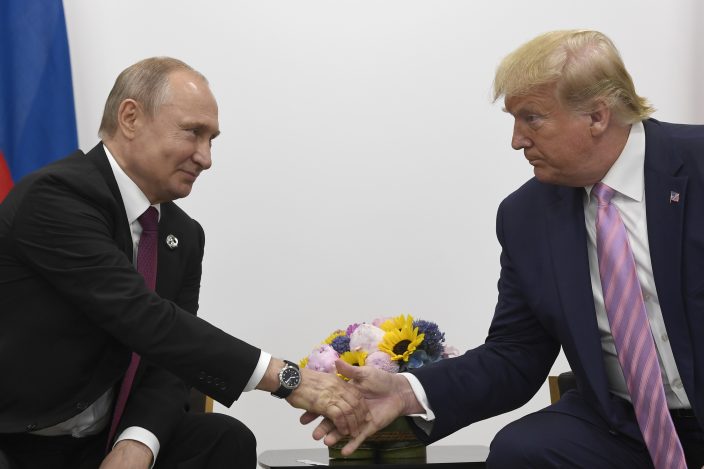 FILE - In this June 28, 2019, file photo President Donald Trump, right, shakes hands with Russian President Vladimir Putin, left, during a bilateral meeting on the sidelines of the G-20 summit in Osaka, Japan. For the past three years, the administration has careered between President Donald Trump's attempts to curry favor and friendship with Vladimir Putin and longstanding deep-seated concerns about Putin's intentions. (AP PhotoSusan Walsh, File)

Pelosi said trying to equate China and Russia on the threat of foreign election interference doesn’t tell the story.

“The Chinese, they said, prefer Biden — we don’t know that, but that’s what they’re saying, but they’re not really getting involved in the presidential election,” she said.

Trump’s national security adviser, Robert O’Brien, said Sunday that the U.S. is taking any threat to U.S. elections seriously. He said that China has engaged in cyberattacks and phishing “with respect to our election infrastructure.” 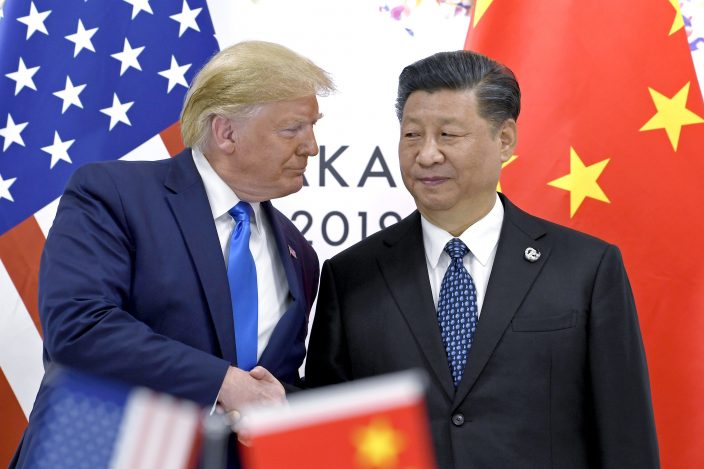 FILE - In this June 29, 2019, file photo, U.S. President Donald Trump, left, shakes hands with Chinese President Xi Jinping during a meeting on the sidelines of the G-20 summit in Osaka, western Japan. The director of US intelligence on Friday raised concerns about interference in the 2020 election by China, Russia and Iran. U.S. intelligence has assessed that China is hoping President Donald Trump does not win reelection, Russia is working to denigrate Democrat Joe Biden and Iran is seeking to undermine democratic institutions, said the director of counterintelligence, Bill Evanina.(AP PhotoSusan Walsh, File)

“We’re not going to put up with it,” he said. “We’re going to take every action necessary to keep folks out, whether it’s China or Russia or Iran or Cuba or Venezuela or others.”

Pelosi and other congressional Democrats have expressed concern that intelligence agencies have been withholding from the public specific intelligence information about the threat of foreign interference in American politics.

“The facts are chilling,” Sen. Richard Blumenthal, D-Conn., wrote in an op-ed published Friday evening in The Washington Post. “I believe the American public needs and deserves to know them. The information should be declassified immediately.” 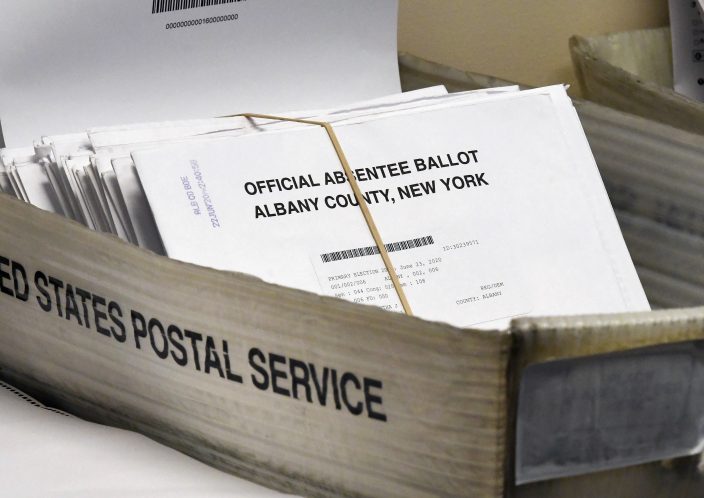 FILE - In this June 30, 2020, file photo, a box of absentee ballots wait to be counted at the Albany County Board of Elections in Albany, N.Y. Never before in U.S. history will so many people exercise the right on which their democracy hinges by marking a ballot at home and entrusting several layers of mostly unseen intermediaries to ensure their votes get accurately counted. (AP PhotoHans Pennink)

Pelosi spoke on CNN's “State of the Union" and ”Fox News Sunday"and O'Brien appeared on CBS' “Face the Nation.”

Ronaldo's Juventus gets Messi's Barcelona in ...

US officials: No signs of foreign targeting of mail-in vote

US sees election threats from China, Russia and Iran

FBI official: Russia wants to see us 'tear ourselves apart'