Tied for the lead while standing on the 17th tee, Paul Casey heard what passed for a commotion on the largely silent, fan-free golf course.

He looked behind him and realized his hopes of winning the PGA Championship had suddenly, startlingly vanished.

Collin Morikawa's on-a-rope drive had stopped 7 feet away, just behind Casey, on the 16th green. It set up an eagle that dropped the Englishman two shots behind with two holes to play Sunday. What had been a jammed leaderboard turned into Morikawa's tournament to lose. 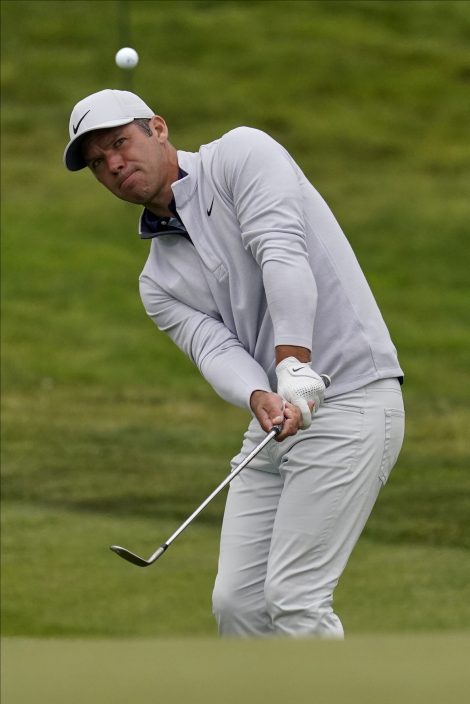 Paul Casey of England, chips to the green on the 13th hole during the final round of the PGA Championship golf tournament at TPC Harding Park Sunday, Aug. 9, 2020, in San Francisco. (AP PhotoJeff Chiu)

He didn't, and Casey had nothing to do but tip his cap.

“What a shot,” Casey said when asked what went through his mind when he saw Morikawa's ball come to rest.

The 43-year-old Casey shot 4-under 66 to finish at 11 under, tied for second with Dustin Johnson and two shots behind the champion.

Casey is now 0 for 64 in majors — the longest current drought out there. But this was not, in his mind, a day to focus on that.

“I played wonderful golf, simple as that,” said Casey, who also has a third at the British Open and a fourth at the Masters on his resume. “And watching Collin come down ... and what a shot he hit on 16, he deserves it.”

Oh, there were places to nitpick Casey's game. There was a 10-footer for birdie on No. 7 that just slid away. There was the seemingly straightforward chip he overcooked near the 13th green, which led to a bogey. But it was his only bogey of the day. He only made three bogeys and one double all week.

“He struck it really well, putted really well,” said Brooks Koepka, who played alongside Casey for the final round. “There were two or three putts, if he'd hit ‘em (harder), they probably would’ve gone in.”

Instead, he is a runner-up for the first time. More than that, he's happy to be finding his form as golf heads into a very busy stretch — with the playoffs, the U.S. Open and the Masters all coming over the next three months.

“I do think I’m in a sweet spot,” Casey said. “It’s taken me 43 years to get there, but yeah, pretty chilled out. I know what I’m capable of, and I'm enjoying my golf.”

After Saturday's third round left him two shots off the lead, he commented on the strangeness of the week at Harding Park, where no fans were allowed because of the COVID pandemic. “I've had practice rounds that have been more nerve-wracking,” he said.

If the feeling changed for the final 18 holes, he never showed it.

He hit seven fairways, but even when he missed, he didn't find much trouble.

He hit his approach shot on No. 14 to 3 feet, and when he tapped in for birdie, he found himself in a seven-way tie for first place at 10 under.

Morikawa certainly wasn't alone in going for the green on the 16th hole, which was playing only 294 yards for the last day. Casey went for it and landed in one of the bunkers protecting the front-left side of the green. He made birdie there. An eagle there a few minutes later is what did him in.

“I love the fact that we’re given an opportunity, and then a guy like Collin steps up and shows you what’s possible,” Casey said.

In a way, Casey showed what's possible, too.

Amid an uproar in Parliament, Indi ...