Shares were mostly higher in Asia on Monday after President Donald Trump issued executive orders to provide tax relief and stopgap unemployment benefits for Americans hit by the fallout from the coronavirus pandemic.

Shares rose Monday in Sydney, Shanghai and Seoul, while markets were closed in Tokyo for a holiday.

“It has been an unusually risk-friendly start to the Monday proceedings, but there is still a lot of wood to be chopped on the U.S. stimulus deal, while Aug. 15 trade talks loom ominously," Stephen Innes of AxiCorp said in a commentary. 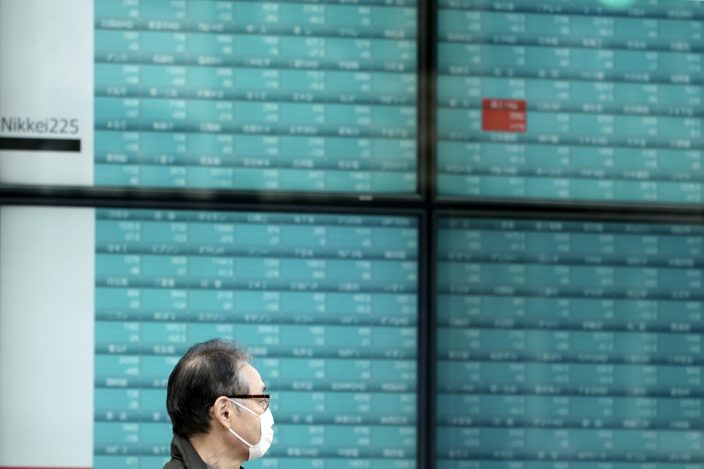 A man walks past an electronic stock board showing Japan's Nikkei 225 index at a securities firm in Tokyo Feb. 25, 2020. Shares were mostly higher in Asia on Monday, Aug. 10, 2020 after President Donald Trump issued executive orders to provide tax relief and stopgap unemployment benefits for Americans hit by the fallout from the coronavirus pandemic. (AP PhotoEugene Hoshiko)

An aide to Hong Kong media tycoon Jimmy Lai says Lai was arrested under the city’s national security law. Hong Kong police said seven people had been arrested on suspicion of violating that law. They did not reveal the names of those arrested.

The national security law came into effect June 30 and is widely seen as a means to curb dissent after anti-government protests rocked Hong Kong last year. It has raised questions over whether and to what extent Communist Party leaders in Beijing will respect the “one-party, two-systems" arrangement promised to the former British colony for a half-century after China took control of the semi-autonomous in 1997.

Markets in Japan and several other countries were closed for holidays.

China reported its consumer price index rose to 2.7% in July from 2.5% in June as flooding disrupted farming across much of the country. But producer prices and core inflation, which excludes food and energy prices, fell to a ten-year low of 0.5%, reflecting continued weakness amid the pandemic.

But uncertainty overhangs the markets, with China-U.S. trade talks planned for Friday and the total number of confirmed coronavirus cases surpassing 5 million.

The move raised questions over whether it would give Americans the economic lifeline he claims and appears certain to face legal challenges. Democrats called it a pre-election ploy that would burden cash-strapped states, which are expected to pick up more of the tab for unemployment benefits.

Trump issued the orders after congressional talks broke down. Democrats initially sought a $3.4 trillion package, but said they lowered their demand to $2 trillion. Republicans had proposed a $1 trillion plan.

Both the White House and congressional Democrats indicated Sunday they wanted to resume negotiations, but no talks were scheduled.

With the Nov. 3 election approaching, the White House is nervously watching signs that the economic recovery is slowing down as the coronavirus surges.

Technology stocks fell on worries that China could retaliate for President Donald Trump’s latest escalation against Chinese tech companies. The Nasdaq composite dropped 0.9%, to 11,010.98 after setting a record Thursday.

Brent crude, the international standard for pricing, added 38 cents to $44.78 per barrel.

For the part of their job that som ...

Asia shares rise as investors look ahead to Fed meeting

Asia shares rise as investors look ahead to Fed meeting

Tech chills spill into Asia, as shares sink across region