It has been seven years since the central air conditioning system worked at the New York City middle school where Lisa Fitzgerald O’Connor teaches. As a new school year approaches amid the coronavirus pandemic, she and her colleagues are threatening not to return unless it's repaired.

Her classroom has a window air conditioning unit, but she fears the stagnant air will increase the chances that an infected student could spread the virus.

“Window units just aren’t going to cut it. We don’t want to stay cool, we just want the air to flow properly,” said O’Connor, a science teacher who has worked at the Patria Mirabal School in Manhattan since 2009. “We are really super stressed out about it.” 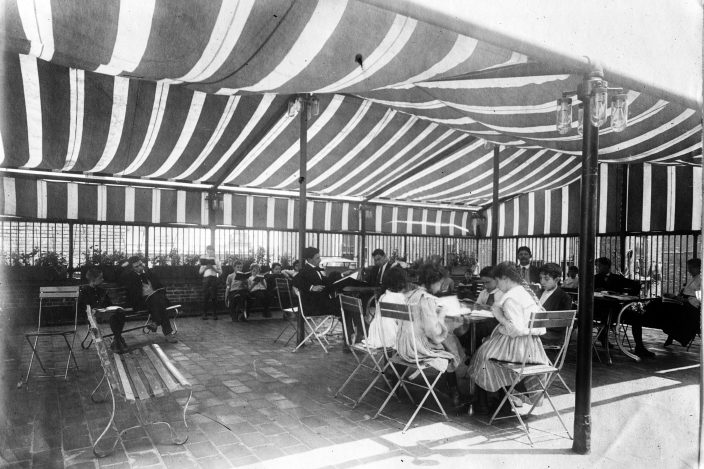 This 1900 photo from the Library of Congress photo shows an open air school in New York. Poor ventilation in school buildings across the U.S. will limit the ability of in-person instruction to resume safely. Some districts are warming to the idea of outdoor classrooms. (Library of Congress via AP)

Schools around the country are facing similar problems as they plan or contemplate reopening this fall, dealing with aging air conditioning, heating and circulation systems that don’t work well or at all because maintenance and replacement were deferred due to tight budgets. Concerns about school infrastructure are adding momentum to plans in some districts, even in colder climates, to take classes outdoors for the sake of student and teacher health.

Nationwide, an estimated 41% of school districts need to update or replace their heating, ventilation and cooling systems in at least half their schools, according to a federal report issued in June.

There is no evidence that the disease can spread through ventilation systems from one classroom to the next, according to Dr. Edward Nardell, a Harvard Medical School professor who specializes in airborne diseases. The danger, Nardell said, is from ineffective systems that don’t remove floating viruses and let them linger in classrooms after they are expelled in an infected person’s breath, sneeze or cough. 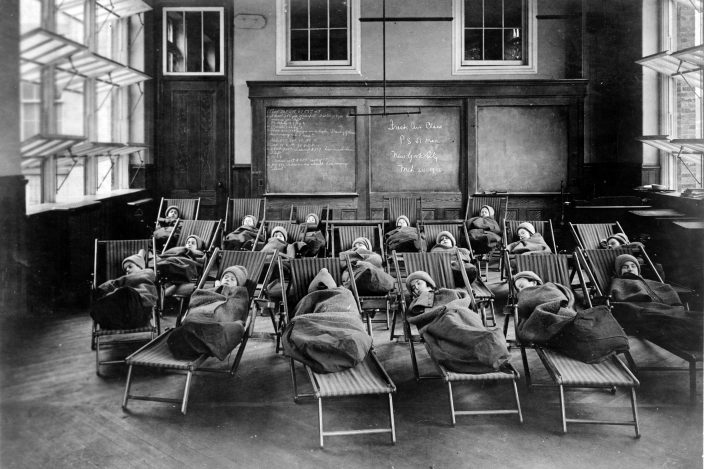 This 1911 photo from the Library of Congress shows children wrapped in blankets, at a fresh air class rest hour at Public School No. 51, in New York. Poor ventilation in school buildings across the U.S. will limit the ability of in-person instruction to resume safely. Some districts are warming to the idea of outdoor classrooms. (Library of Congress via AP)

“Most schools are designed for comfort, not for infection control. So there is a danger that if you put 20 kids in a room, that if one of them has asymptomatic COVID and is infectious, you now have 19 more kids who are exposed,” Nardell said. Healthy children almost always recover from COVID, if they become ill at all, but they can pass the disease to teachers, parents and other adults.

Nardell believes schools should consider installing ultraviolet lights along classroom ceilings, a technology some used in the 1950s and earlier to combat measles, tuberculosis and other airborne diseases and that is still used in hospitals and homeless shelters. Viruses and bacteria are destroyed using a spectrum of UV light that is safe for humans. Manufacturers say the devices would cost $3,000 per classroom.

Some, including Education Secretary Betsy DeVos, say one solution to air circulation problems may be teaching classes outdoors, which was done during tuberculosis and influenza outbreaks in the early 1900s, even in cold weather. The coronavirus spreads less efficiently outdoors and students could more easily sit 6 feet (2 meters) apart. 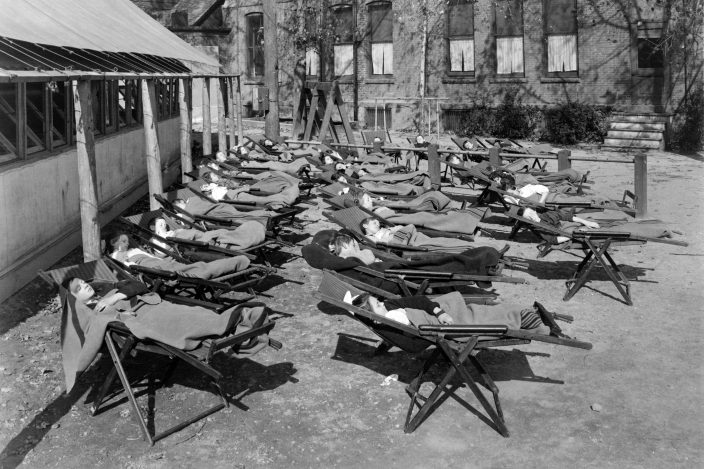 This 1912 photo from the Library of Congress shows an open air school during rest period in Rochester, N.Y. Poor ventilation in school buildings across the U.S. will limit the ability of in-person instruction to resume safely. Some districts are warming to the idea of outdoor classrooms. (Library of Congress via AP)

“Nature has been shown to restore the ability to pay attention,” she said.

Several schools in the Northeast have bought large event tents like those used at outdoor weddings and plan to use them to teach outside through November. 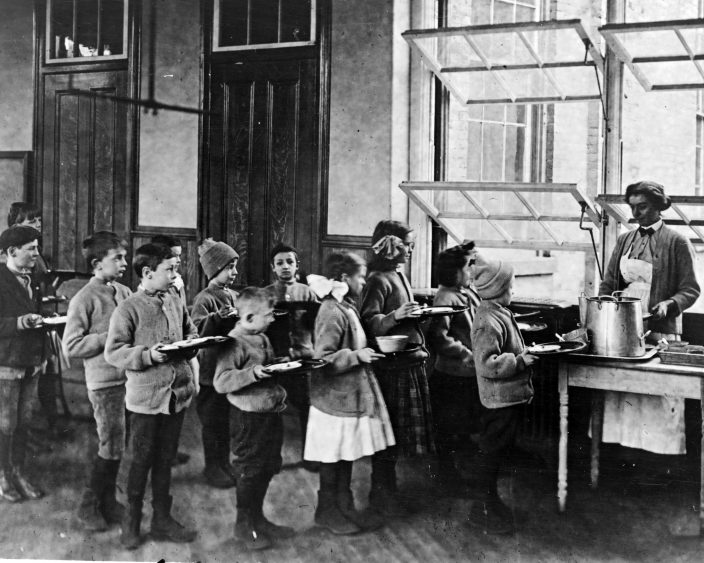 This 1900 photo from the Library of Congress photo shows schoolchildren waiting for lunch at open air school, PS 51, in New York. Poor ventilation in school buildings across the U.S. will limit the ability of in-person instruction to resume safely. Some districts are warming to the idea of outdoor classrooms. (Library of Congress via AP)

The White River Valley Middle School in Bethel, Vermont, spent $50,000 on tents and another $20,000 on port-a-potties, hand-washing stations and other equipment. While some schools have equipped tents with propane heaters, White River Valley Principal Owen Bradley said his students can handle the expected November daytime temperatures in the 30s (about 0 Celsius) without them.

Bradley said one upside will be an opportunity to help students better understand and appreciate nature.

“We hope they value it forever and help us save the planet,” he said.

Schools bringing students back this fall will require or at least strongly suggest masks, but officials say they can only be so effective during six-hour school days indoors. Air circulation is needed.

Stephen Murley, the school superintendent in Green Bay, Wisconsin, said most of his district's 42 campuses have older air systems. When there is high humidity, they are set to recirculate drier indoor air to prevent unhealthy black mold from growing on the walls — but battling the coronavirus requires fresh air.

“We have two things working at odds with each other,” Murley said.

Janet Robinson, the superintendent in Stratford, Connecticut, said some of her district’s 13 schools were built between 80 and 100 years ago and aren't capable of handling modern air systems — “they are a challenge.” There are also crowding issues — one has classrooms built for 15 students but that typically have 25, making social distancing impossible.

“It is kind of naive for politicians and whoever to say, ‘Just bring (the students) in and keep them at 6 feet (2 meter) distance,‘” she said.

Brian Toth, superintendent of the Saint Marys Area School District in northern Pennsylvania, said his district’s five schools’ air systems have no exit vents to circulate fresh air in and the virus out. He estimates it would cost at least $600,000 per school to replace the systems. When his schools reopen Aug. 31, students will be asked to wear masks, but Pennsylvania law exempts children whose parents claim they have a physical or mental condition.

“You look at the way schools were built, nobody expected to have a classroom with a 6-foot radius around a student,” Toth said. Instead, classrooms “pack them in like sardines and now we are facing the consequences.”

In a state where Confederate monum ...

It's class time again across Europe, virus or no

Guidance for masks in schools varies widely across US states