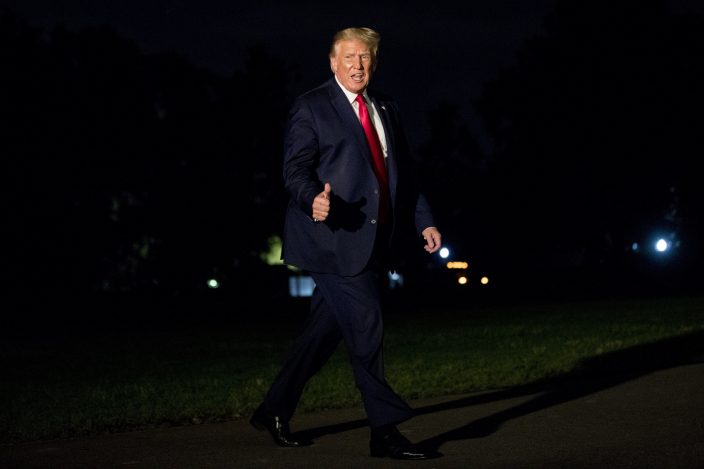 President Donald Trump gives a thumbs-up to members of the media as he walks across the South Lawn as he arrives at the White House in Washington, Sunday, Aug. 9, 2020, after returning from Morristown, N.J. (AP PhotoAndrew Harnik)

The 2020 spotlight is about to shift, at least temporarily, away from President Donald Trump and onto his Democratic rival, Joe Biden.

The former vice president has largely been an afterthought in recent months as he waited out much of the coronavirus pandemic from his Delaware home and Trump struggled on the global stage through a series of crises and self-made controversies. That dynamic will change when Biden announces his vice presidential selection, which is almost certain to come this week, ahead of the Democratic National Convention's Aug. 17 start date.

The burst of attention offers risks and rewards for Biden, who has struggled to energize Democrats behind his candidacy and has a demonstrated proclivity for gaffes. He is expected to make history by tapping a woman of color to serve as his running mate, although his decision remains one of the most closely guarded secrets in politics.

How will Biden handle the spotlight?

It's no secret that Democrats want the 2020 election to be a referendum on Trump. They're far more comfortable with voters focusing on the Republican incumbent's struggle to control the pandemic, revive the economy and unify the nation. But for the next two weeks, the brightest spotlight is expected to shine on Biden and his party.

His vice presidential announcement will likely be the dominant story, at least temporarily. And that leads immediately into the mostly virtual Democratic National Convention.

Make no mistake: Biden remains a candidate with flaws no matter what the polls say. Republicans have legitimate openings to attack the 77-year-old lifelong politician's age, his misstatements and his long and mixed record. The presumptive nominee has been able to deflect such attacks for much of the year given the political world's focus on Trump's leadership through multiple crises, but very soon Biden will be under a relentless glare.

Aside from the debates, no moment in the campaign may be more consequential for Biden's fate than this one.

Will Biden make history — and how much will it matter?

Never before has a woman of color been featured on a major party's presidential ticket. Biden is under intense pressure to do just that this week, although it may not be accurate to assume he's already ruled out the white women. He met privately with Michigan Gov. Gretchen Whitmer, who's white, last week. Massachusetts Sen. Elizabeth Warren, who also is white, has also been a leading contender.

Still, it would be a surprise if Biden did not choose a Black woman from a short list that includes at least three prominent African Americans: California Sen. Kamala Harris, former national security adviser Susan Rice and California Rep. Karen Bass.

It's worth noting here that running mates have rarely, if ever, swayed a presidential election in the modern era. But Biden's team hopes that the historic nature of his pick might help energize two key Democratic constituencies: women and people of color. Both groups are opposed to Trump, but that doesn't mean they're necessarily excited to turn out for Biden.

It's fair to wonder how effective the leading candidates would be in exciting the Democratic base. Harris struggled to energize Black voters behind her primary campaign earlier in the year, and Rice and Bass remain largely unknown nationally.

Will anyone stop Russia?

They warned us that Russia would be back, and now U.S. intelligence officials have confirmed that Russia is using a variety of measures to denigrate Biden ahead of the November election and that individuals linked to the Kremlin are boosting Trump’s reelection bid.

The country’s counterintelligence chief, William Evanina, on Friday offered the most specific warning to date about the threat of foreign interference in the 2020 election. He also announced that U.S. officials believe that China does not want Trump to win a second term and has accelerated its criticism of the White House.

But the assessment presents a much more direct threat from Russia, which, of course, has been charged by the U.S. government for various crimes related to interfering in the 2016 election on Trump's behalf.

The Trump administration implemented a series of sanctions in recent years against Russia, but it's unclear if the president will do anything else to confront the new threat of foreign interference. He again appeared to dispute his own government's intelligence over the weekend when asked about Evanina's warning.

“I think the last person Russia wants to see in office is Donald Trump because nobody has been tougher on Russia than I have — ever,” Trump said.

Meanwhile, Trump's Republican allies on Capitol Hill are waging an ongoing probe into Biden's son Hunter and his work in Ukraine that parallels Russian disinformation efforts. The statement released Friday called out by name a pro-Russia Ukrainian lawmaker who has been spreading unsubstantiated corruption allegations against Biden and his son, which make up the core of the Republican investigation.

With Congress gridlocked and the nation in crisis, Trump over the weekend bypassed the legislative branch with executive actions that deferred payroll taxes and offered a supplemental federal unemployment benefit of up to $400 a week to millions of Americans.

It may not be legal. But it's easy to see out-of-work Americans warming to Trump's move given that a week earlier an estimated 30 million people lost enhanced unemployment benefits in the midst of a public health crisis because of congressional inaction.

Trump's willingness to make his own rules has often gotten him into trouble over the last four years. And it may again this time. But Congress' inability to get a deal done in the midst of legitimate crises is a reminder why voters supported a populist outsider in the first place.

There is likely more risk than reward waiting for Biden as he weighs whether to pick a woman of color to serve as his running mate. Such a decision would be historic. But it's far from certain that a Black female vice presidential nominee would on its own produce the kind of strong African American turnout Democrats need to defeat Trump.

Given the expectations, however, Biden faces a real backlash should he not pick a woman of color. Aimee Allison, of She the People, tells us that it would be “a reckless choice to pick a white running mate with a party that’s as dependent on Black and brown voters as it is.”

In Breonna Taylor's name: Devastation and a search ...

Chea Woolfolk searched the crowd u ...

2020 Watch: And the Democratic veepstakes winner is?

2020 Watch: Can Trump turn around his beleaguered campaign?

2020 Watch: Does Trump have a strategy to win in November?