The number of confirmed coronavirus cases worldwide topped 20 million on Tuesday, more than half of them from the U.S., India and Brazil.

Health officials believe the actual number is much higher than that tally kept by Johns Hopkins University, given testing limitations and the fact that as many as 40% of those who are infected have no symptoms.

It took six months or so to get to 10 million cases after the virus first appeared in central China late last year. It took just over six weeks for that number to double. 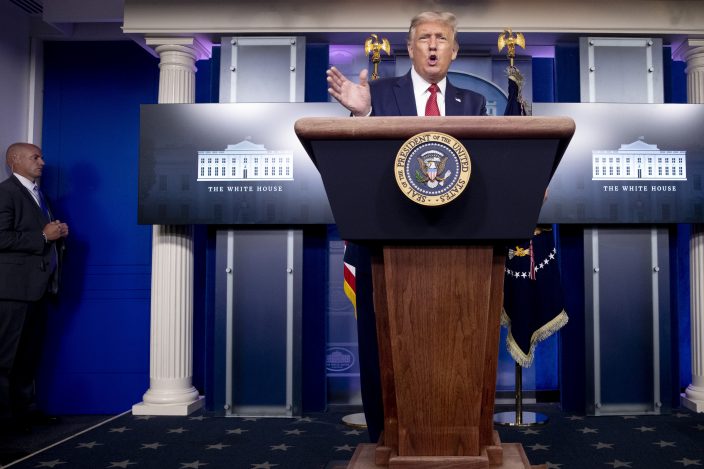 President Donald Trump arrives for a news conference in the James Brady Press Briefing Room at the White House, Monday, Aug. 10, 2020, in Washington. Trump briefly left because of a security incident outside the fence of the White House. (AP PhotoAndrew Harnik)

An AP analysis of data through Aug. 9 showed the U.S., India and Brazil together accounted for nearly two-thirds of all reported infections since the world hit 15 million coronavirus cases on July 22.

The number of new daily cases has continued to rise in India, hitting a rolling seven-day average of 58,768. In the U.S., which has more than 5 million cases, the average has decreased since July 22nd, but remains high at 53,813 new cases a day. 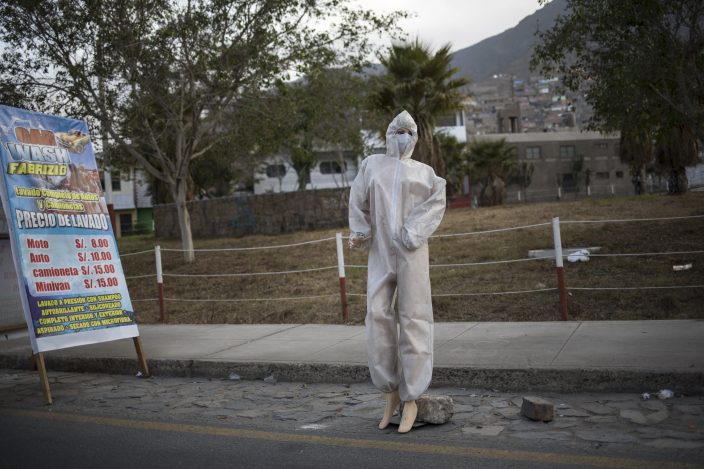 A mannequin dressed in protective gear due to the COVID-19 pandemic, is deployed in front of a car wash to attract customers, in Lima, Peru, Monday, Aug. 10, 2020. (AP PhotoRodrigo Abd)

Caseloads are still rising quickly in many other countries, including Indonesia and Japan.

In Mexico, President Andrés Manuel López Obrador, like Brazil’s Jair Bolsonaro and President Donald Trump, seldom wears a mask and has resisted calls for a strict lockdowns, saying Mexicans should be convinced to observe social distancing, not forced to do so by police or fines.

Eduardo Salazar Perez works on a project as he sits on a piece of public art amid the new coronavirus pandemic in central Mexico City, Monday, Aug. 10, 2020. (AP PhotoRebecca Blackwell)

With nearly 500,000 cases and more than 50,300 deaths, Mexico has struggled with how to curb outbreaks given that just over half its people work off the books with no benefits or unemployment insurance.

A full lockdown would prove too costly for people with little savings and tenuous daily incomes, said Assistant Health Secretary Hugo López-Gatell, the president’s point man on the epidemic, noting “we do not want a solution that would, in social terms, be more costly than the disease itself.”

Mexico's relatively high death rate results partly from the country having one of the world's highest rates of obesity and diabetes. There has also been relatively little testing. Of all tests done, 47% are positive, suggesting that only seriously ill people are getting tests. That has hindered contract tracing. In Japan, where outbreaks have been widening as officials urge people to consider this year's summer holidays “special" and stay home, the positivity rate of tests in Tokyo, the worst hit region, has been climbing but remains at 7%.

The pandemic has waxed and waned in many regions, with the U.K. and Spain seeing new outbreaks after the worst of the early waves of cases paralyzed much of Europe.

In Asia, Vietnam went from having reported no confirmed deaths and very few cases to battling fresh outbreaks that emerged in the seaside city of Danang. Australia was preparing to reopen travel with neighboring New Zealand, which has had no confirmed locally transmitted cases in more than 100 days, when fresh clusters of coronavirus cases popped up in Melbourne and the surrounding region. 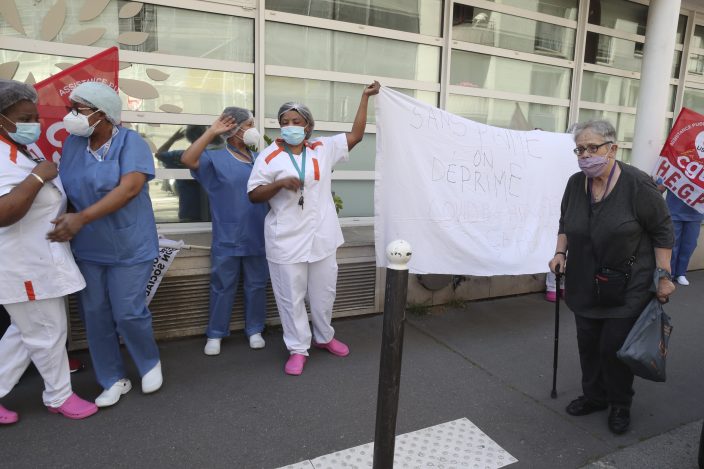 An elderly woman walks past employees demonstrating outside a nursing home of the Korian group, one of the market leaders in the lucrative industry of providing care and assisted living facilities for older adults, Monday, May 25, 2020 in Paris. In France, the group is facing several lawsuits filed by families who have lost loved ones during the coronavirus pandemic that has caused thousands of deaths in French care homes. (AP PhotoThibault Camus)

Meanwhile, outbreaks in mainland China and semi-autonomous Hong Kong declined, with the number of new community infections in China falling to 13, all in the northwestern region of Xinjiang. Hong Kong counted 69 new cases.

Similar to many other Asian countries, China requires testing and a two-week quarantine of all new arrivals and has barred most foreigners from entering the country. 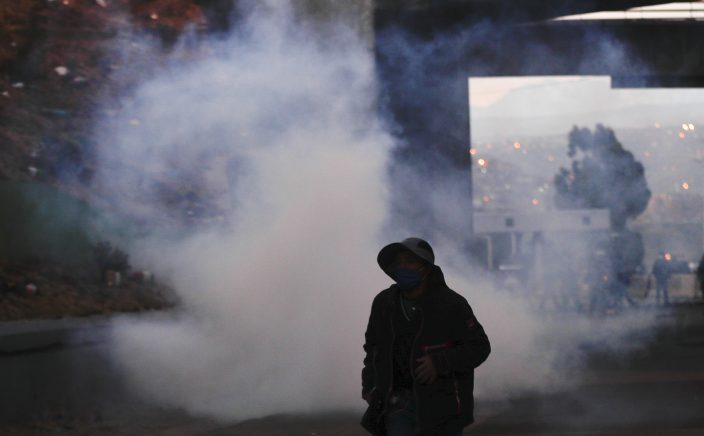 A demonstrator runs for cover from tear gas fired by police, during a protest against the postponement of the upcoming presidential election in El Alto, Bolivia, Monday, Aug. 10, 2020. Citing the ongoing new coronavirus pandemic, the nation's highest electoral authority delayed presidential elections from Sept. 6 to Oct. 18, the third time the vote has been delayed. (AP PhotoJuan Karita)

Border closures, masks, lockdowns and infection data are now the new way of life for much of the world, not the politically combustible factors they are in the U.S.

A review by the Kaiser Health News service and The Associated Press found that at least 49 state and local public health leaders have resigned, retired or been fired since April across 23 states. The list has grown by more than 20 people since the AP and KHN started keeping track in June.

Contributing to that attrition and burnout of badly needed experts have been attacks on public health experts and institutions from the highest levels, including President Donald Trump, who has sidelined the Centers for Disease Control during the pandemic.

“The overall tone toward public health in the U.S. is so hostile that it has kind of emboldened people to make these attacks,” said Dr. Tom Frieden, former director of the Centers for Disease Control and Prevention.