Nick Solak singled three times and drove in three runs, leading the Texas Rangers to a 4-2 victory over the Seattle Mariners on Tuesday night.

Solak had a two-run single in the first and an RBI hit in third, when Willie Calhoun added another run-scoring single. Calhoun's hit scored slugger Joey Gallo, who was hit by a pitch twice and walked his other two times up.

Left-hander Mike Minor allowed an infield single and three walks with four strikeouts in four scoreless innings but was pulled after 76 pitches with the Rangers trying to solve a dip in velocity from his previous start. 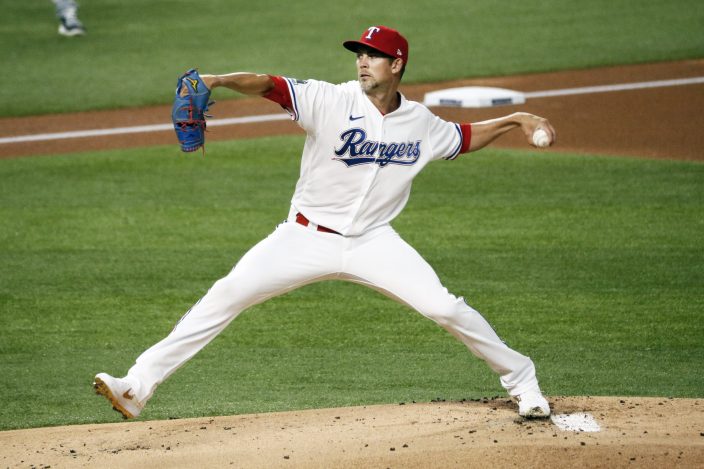 Texas Rangers starting pitcher Mike Minor delivers to the plate against the Seattle Mariners in the first inning of a baseball game in Arlington, Texas, Tuesday, Aug. 11, 2020. (AP PhotoRay Carlin)

Manager Chris Woodward said before the game he wanted to get Minor out before the velocity dropped again in hopes of restoring longer outings for the 32-year-old with a history of shoulder problems. The Rangers said Minor had no issues.

Edinson Volquez (2-1) was awarded the win by the official scorer after replacing Nick Goody, who came on after Minor and allowed both Seattle runs, one of them unearned. Rafael Montero pitched a perfect ninth for his third save.

Kyle Seager singled twice to become the active player with the most hits against Texas at 179. He passed Mike Trout (177). J.P. Crawford had the only RBI for the Mariners on a fifth-inning single. 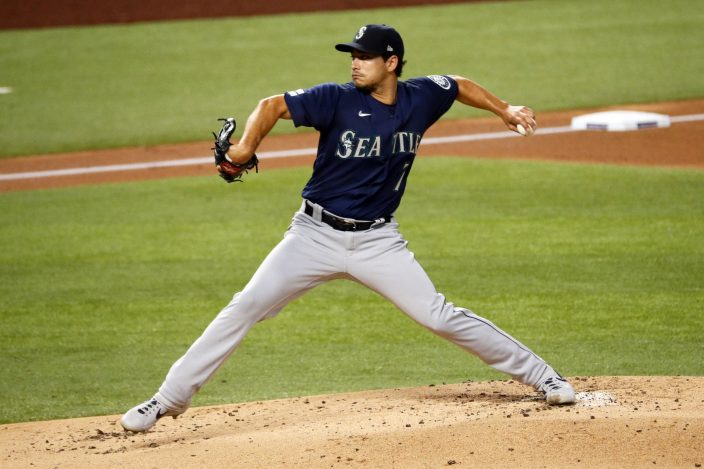 The Rangers put right-handed reliever Luke Farrell on the injured list because of close contact with a person who tested positive for COVID-19. The son of former Toronto and Boston manager John Farrell has tested negative for the virus. The close contact didn't occur outside his home. Farrell has no record and a 13.50 ERA in three appearances. 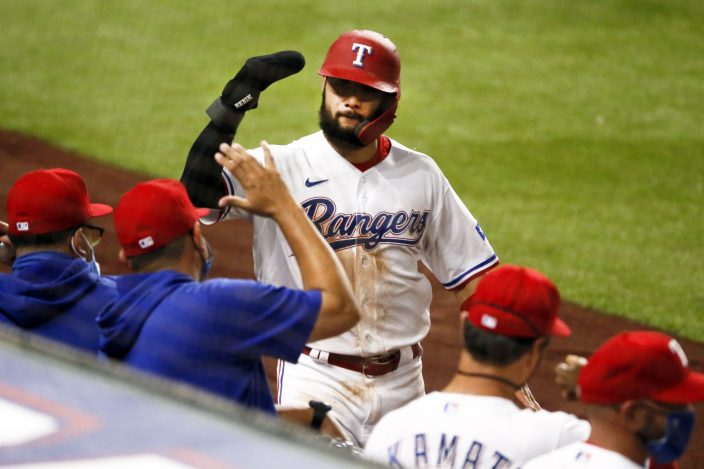 Texas Rangers' Isiah Kiner-Falefa salutes the dugout after scoring on a single by Nick Solak in the third inning of a baseball game against the Seattle Mariners in Arlington, Texas, Tuesday, Aug. 11, 2020. (AP PhotoRay Carlin)

Starting Aug. 24, the Rangers are going back to 7:05 p.m. starts local time for the seven remaining games against West Coast teams that had been scheduled for 8:05 p.m. Central time. The original change was made for fans in the Pacific time zone during the pandemic-shortened season, with the reciprocal agreement of 6:05 p.m. Pacific starts when Texas played out West.

Texas requested the switch back for its TV viewers and radio listeners (no fans are allowed in stadiums). It was approved by Major League Baseball and the visiting teams. The switch affects four games against Oakland, two against the Los Angeles Angels and one against the Dodgers.

The Rangers had their appeal denied over a rare four-base error against Angels right fielder Jo Adell after a fly ball from Nick Solak popped out of the rookie's glove and over the fence in a 7-3 Texas win Sunday.

The official scorer originally ruled it a home run, but changed it after consulting with the Elias Sports Bureau. Elias said it was unaware of any previous four-base error on a ball that went over the fence.

Seattle RHP Taijuan Walker (1-2, 5.79 ERA) is scheduled to face RHP Jordan Lyles (1-1, 5.56) in the finale of a three-game series. It's the last of 20 straight games without a day off to start the season for the Mariners.