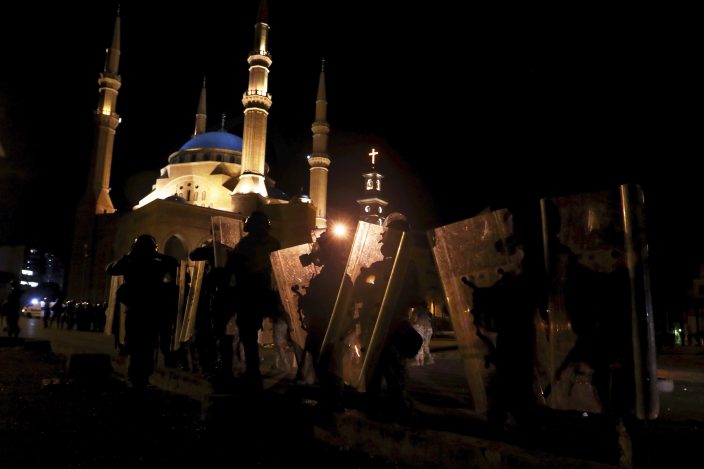 Riot police stand guard in front of the Mohammad al-Amin Mosque, during a protest following last week's explosion that killed many and devastated the city, in Beirut, Lebanon, Tuesday, Aug. 11, 2020. (AP PhotoBilal Hussein)

ELECTION 2020-BIDEN-VP-HOW IT HAPPENED — Joe Biden’s selection of Kamala Harris as his running mate capped a monthslong process. Biden started with a list of roughly 20 contenders, including governors, senators, mayors, House members and other Democratic leaders. In the final days before his decision, he spoke with 11 finalists for the position. In the end, he selected a former rival, the senator from California. SENT: 1,340 words, photo. With ELECTION 2020-BIDEN-VP — Biden picks Harris as running mate, first Black woman. 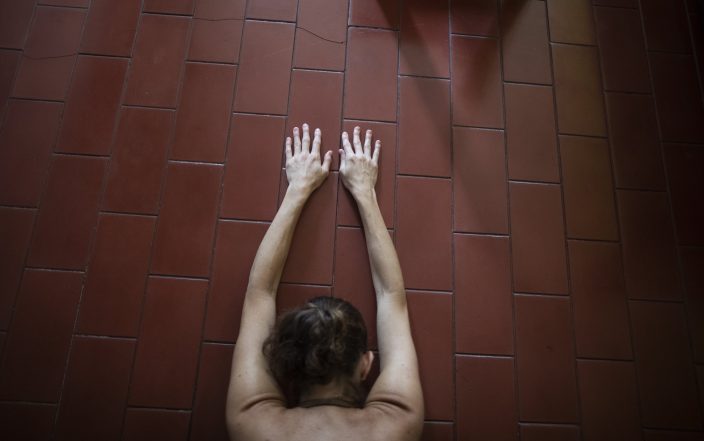 Carolina Wolf, who dances with Venezuela's national ballet, stretches in her living room at the end of a training session, during a lockdown to curb the spread of COVID-19 in Caracas, Venezuela, Tuesday, Aug. 11, 2020. The 42-year-old ballerina said her living room is four times smaller than the studio where she practiced daily at the famed Teresa Carreño Theater, and she doesn't dare do jumps in fear of injuring herself on the hard floor. (AP PhotoAriana Cubillos)

VIRUS-OUTBREAK — With a coronavirus vaccine still months off, companies are rushing to test what may be the next best thing: drugs that deliver antibodies to fight the virus right away, without having to train the immune system to make them. Antibodies are proteins the body makes when an infection occurs; they attach to a virus and help it be eliminated. Vaccines work by tricking the body into thinking there’s an infection so it makes antibodies and remembers how to do that if the real bug turns up. By Chief Medical Writer Marilynn Marchione. SENT: 980 words, photo. With VIRUS-OUTBREAK-THE-LATEST. Also see VIRUS OUTBREAK-VACCINE COMPETITION below.

AMERICA DISRUPTED-LATINOS — The coronavirus is disrupting Latinos’ long climb up the political ladder. They are the country’s largest minority group but haven’t fully flexed their political muscles, and those seeking office are finding it challenging to make their case in their community during the pandemic. By Nicholas Riccardi. SENT: 2,700 words, photos, video. An abridged version of 1,070 words is available.

LEBANON EXPLOSION-CHILDREN’S TRAUMA — When the huge explosion ripped through Beirut last week, it shattered the glass doors near where 3-year-old Abed Itani was playing with his Lego blocks. He suffered a head injury and cuts on his tiny arms and feet, and he was taken to the emergency room, where he sat amid other bleeding people. In the days since then, Abed has not been the same. Like thousands of others in Lebanon, he is grappling with trauma. By Dalal Mawad. SENT: 750 words, photos.

ISRAEL-FIRST-TIME PROTESTERS — Boisterous rallies against Israeli Prime Minister Benjamin Netanyahu have brought out a new breed of protesters — young middle-class Israelis who feel his scandal-plagued rule has robbed them of their future. It is a phenomenon that could have deep implications for the country’s leaders. By Josef Federman. SENT: 1,030 words, photos.

VIRUS OUTBREAK-VACCINE COMPETITION — Russia's announcement that it is the first to approve a coronavirus vaccine has been met by doubts about its science and safety, proving the competition to have the first vaccine is about international rivalries as well as science. SENT: 810 words, photo.

VIRUS OUTBREAK--BRITAIN SCIENTIST CRITICS — As Britain navigates its way through the coronavirus pandemic, the government insists that science is guiding its decisions. But a self-appointed group of independent experts says it sees little in Britain’s response that is evidence-based. By Medical Writer Maria Cheng. SENT: 1,010 words, photos.

VIRUS-OUTBREAK-HOMESCHOOLING — As parents nationwide prepare to help their children with more distance learning, a small but quickly growing number are deciding to take matters entirely into their own hands and begin homeschooling. SENT: 1,090 words, photos.

VIRUS OUTBREAK-ASIA — The Australian state of Victoria reports a record 21 virus deaths and 410 new cases from an outbreak in the city of Melbourne that has prompted a strict lockdown. SENT: 700 words, photos.

VIRUS OUTBREAK-NEW ZEALAND — Health authorities in New Zealand are scrambling to trace the source of a new outbreak of the coronavirus as the nation’s largest city goes back into lockdown. SENT: 690 words, photos.

VIRUS OUTBREAK-CONGRESS-EXPLAINER — The Trump administration and top congressional Democrats are taking a hard line in coronavirus relief bill talks, but no one is giving up on reaching a deal, making further rounds of negotiations a near certainty. SENT: 860 words, photos.

RACIAL-INJUSTICE-PORTLAND — People who have been arrested since late May on non-violent misdemeanor charges during protests that have racked Oregon’s largest city for more than 70 days won’t be prosecuted. SENT: 510 words, photos.

ELECTION 2020-HARRIS-BLACK VOTERS — Black women have fought for generations for their voices to be heard and political aspirations recognized, so Harris’ selection as Biden’s running mate is historic in many senses. SENT: 1,180 words, photos.

ELECTION 2020-SEXISM AND DISINFORMATION — Before Biden named Harris his running mate, women’s groups were readying a campaign of their own: shutting down sexist coverage and disinformation about a vice presidential nominee they say is headed for months of false smears and “brutal” attacks from internet haters. SENT: 900 words, photos.

KAMALA HARRIS FAITH — Harris attended services at both a Black Baptist church and a Hindu temple growing up – an interfaith background that reflects her historic status as the first Black woman and woman of South Asian descent on a major-party presidential ticket. SENT: 540 words, photo.

ELECTION-2020-GEORGIA-14TH — Marjorie Taylor Greene, a businesswoman who has expressed support for the far-right conspiracy theory QAnon and been criticized for a series of racist comments, wins the Republican nomination for Georgia’s 14th Congressional District. SENT: 700 words, photos. With ELECTION 2020-GEORGIA PROSECUTOR — Willis beats longtime DA in county that includes Atlanta.

ELECTION-2020-MINNESOTA — Rep. Ilhan Omar of Minnesota survives a stiff Democratic primary challenge from a well-funded opponent who tried to make an issue of her national celebrity, the latest in a string of victories by a new generation of emboldened progressive lawmakers. SENT: 860 words, photos.

BELGIUM-BEACH BATTLE — The coronavirus and a heat wave are weighing heavily on Belgium, where people are living under a new series of health restrictions. SENT: 990 words, photos.

HONG-KONG-EMIGRATION — Hong Kong’s new national security law has many in the former British colony worried that Beijing is stripping their city of its freedoms. SENT: 1,160 words, photos.

MEXICO-CORRUPTION — Mexicans were inundated by a slick, expensive ad campaign on behalf of front-running presidential candidate Enrique Peña Nieto for the 2012 election, but few then suspected who is now being alleged to have paid for it — Brazilian construction giant Odebrecht, which has admitted to involvement in widespread corruption in Latin America. SENT: 630 words, photo.

JAPAN-BLACK-RAIN — Japan’s government and the city of Hiroshima appeal a court ruling ordering them to certify dozens of people who were exposed to radioactive “black rain” in the aftermath of the 1945 U.S. atomic bomb attack. SENT: 300 words, photo.

BRITAIN-ECONOMY — The U.K. economy has fallen into a recession after official figures show it contracting by a record 20.4% in the second quarter as a result of lockdown measures put in place to counter the coronavirus pandemic. SENT: 620 words, photo.

VIRUS OUTBREAK-SPRING FOOTBALL — It's time to start talking about the idea of moving the 2020 college football to the spring of 2021. By College Football Writer Ralph D. Russo. SENT: 1,000 words, photos.

Both Germany and Hungary are tryin ...

France advanced without kicking a ...