Yu Darvish took a no-hitter into the seventh inning in his third straight dominant start, and the major league-leading Chicago Cubs defeated the Milwaukee Brewers 4-2 on Thursday night.

Darvish allowed just one hit — Justin Smoak’s towering solo homer to right field with one out in the seventh inning on his 98th pitch — before being relieved by Casey Sadler to start the eighth. The 33-year-old right-hander from Japan struck out 11 and threw 104 pitches.

Before Smoak’s drive, Darvish allowed only three baserunners. He walked Ben Gamel in the second and Orlando Arcia in the fifth, and hit Christian Yelich with a low pitch in the first. 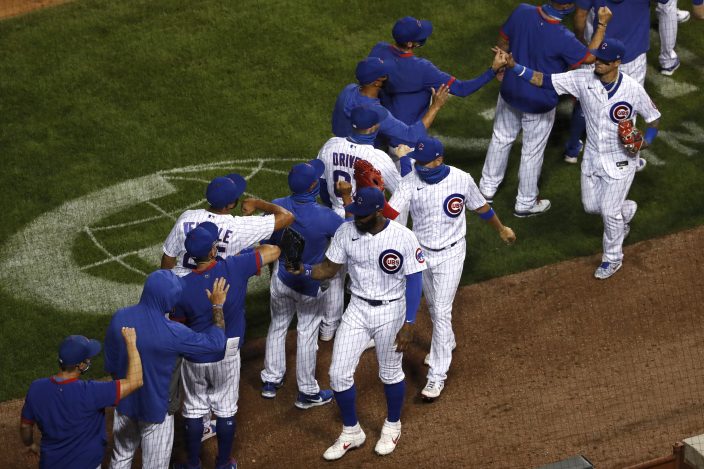 The Chicago Cubs celebrate after beating the Milwaukee Brewers during a baseball game in Chicago, on Thursday, Aug. 13, 2020. The Cubs won the game 4-2. (AP PhotoJeff Haynes)

Kyle Schwarber hit a solo homer in the second as Chicago improved to 13-3 for the first time since 1907. Javier Baez, Ian Happ and David Bote each had an RBI.

Darvish signed a $126 million, six-year contract with the Cubs as a free agent in February 2018, but has been hampered by elbow and triceps injuries since coming to Chicago. But after a rocky first outing this season, against the Brewers on July 25, Darvish has been in a groove. 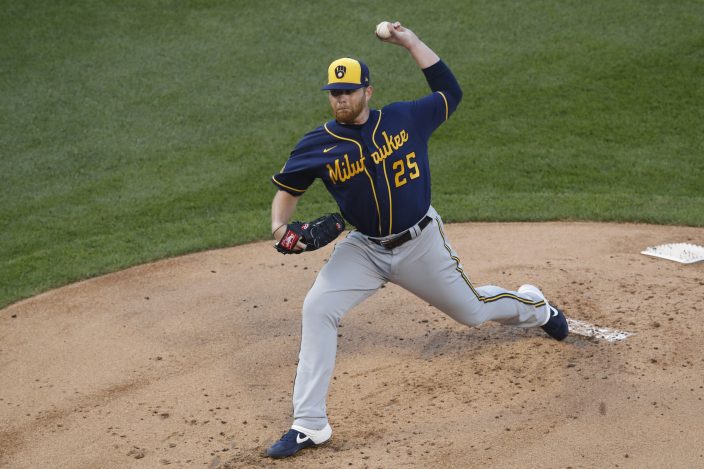 Sadler worked around a single by Arcia in a scoreless eighth. Rowan Wick allowed a single by Avisail Garcia and a ground-rule double to Smoak with two outs in the ninth for Milwaukee’s second run, but closed it out for his third save and a combined four-hitter.

Darvish has twice come within one out of a no-hitter, both times with the Texas Rangers.

Cubs slugger Kris Bryant was held out of the starting lineup with a sore left wrist and ring finger. 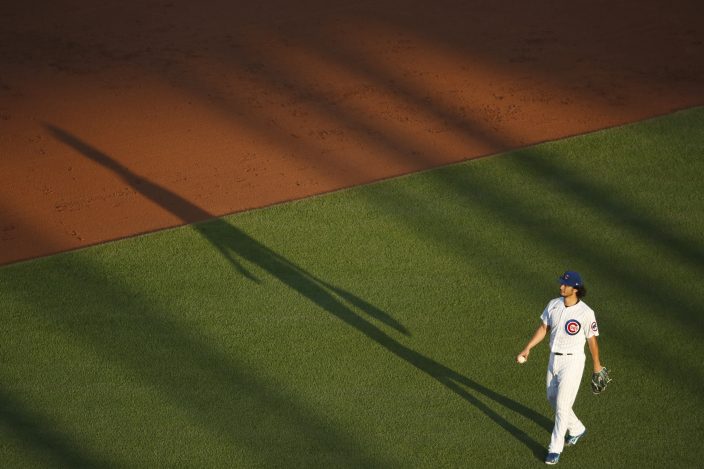 Chicago Cubs starting pitcher Yu Darvish walks around the mound after a strikeout during the third inning of a baseball game against the Milwaukee Brewers, Thursday, Aug. 13, 2020, in Chicago. (AP PhotoJeff Haynes)

Manager David Ross didn’t disclose if Bryant would be available off the bench, but said he made the move out of “an abundance of caution.”

Bryant was injured trying to make a diving catch in left field Wednesday in the fifth inning of the Cubs' 7-2 win at Cleveland. He remained in the game and hit a home run in the sixth before being pulled in the eighth

With Bryant out, Schwarber started in left field and Bote at third base. 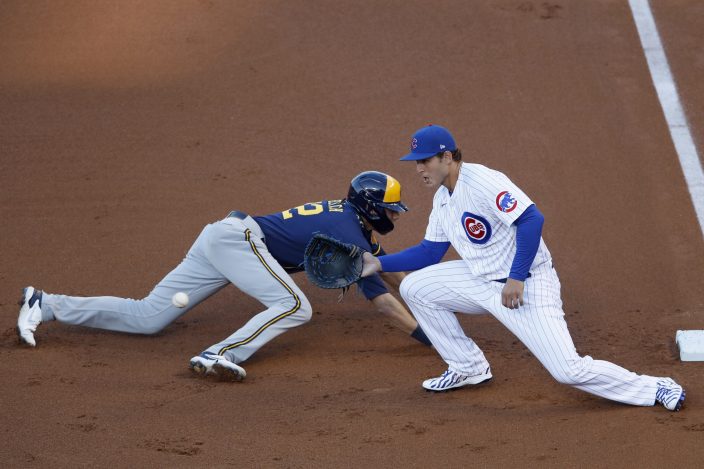 Chicago Cubs first baseman Anthony Rizzo, right, waits on the throw to first base as Milwaukee Brewers' Christian Yelich, left, dives back to the base during the first inning of a baseball game in Chicago, Thursday, Aug. 13, 2020. (AP PhotoJeff Haynes)

The Cubs jumped ahead 1-0 in the first. Nico Hoerner laced Brett Anderson’s first pitch for a double and scored on Baez’s groundout.

Schwarber led off the second with an opposite-field shot to left to make it 2-0.

Chicago tacked on two more runs in the sixth off reliever Corbin Burnes. Happ drove in the first with a double and Bote followed with an RBI single. 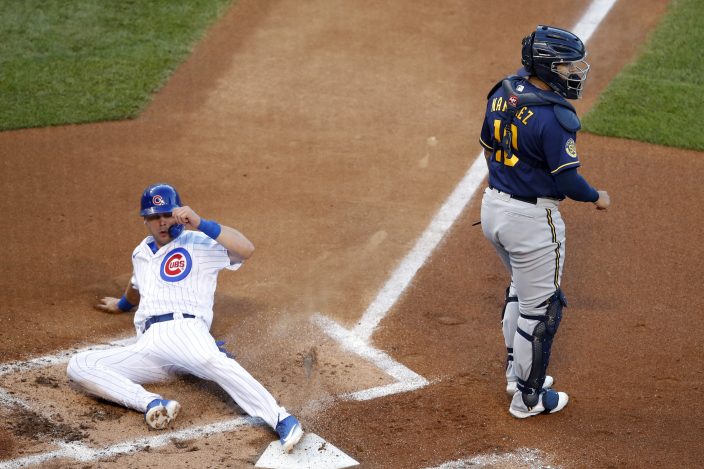 Chicago Cubs' Nico Hoerner, left, slides across homeplate scoring a run on a fielders choice as Milwaukee Brewers catcher Omar Narvaez, right, looks on during the first inning of a baseball game in Chicago, on Thursday, Aug. 13, 2020. (AP PhotoJeff Haynes)

Darvish’s pitch count was piling up entering the seventh. There was no doubt on Smoak’s drive, which sailed out to right. Before that, the hardest-hit ball off Darvish was Yelich’s liner straight at right fielder Steven Souza Jr. leading off the fourth.

The Brewers optioned LHP Eric Lauer to their alternate training site in Appleton, Wisconsin. Lauer dropped to 0-2 and his ERA ballooned to 12.54 after Minnesota pounded him for seven runs on nine hits over 3 2/3 innings in a start at Milwaukee on Wednesday. Manager Craig Counsell wasn’t ready to name Lauer’s replacement in the rotation, but the Brewers recalled LHP Angel Perdomo and selected RHP Drew Rasmussen from the alternate site.

Brewers: Placed RHP Justin Grimm on the 10-day injured list with a callus laceration on his right index finger after it flared up in a 12-2 loss to the Twins on Wednesday.

Cubs: Ross said he was just “trying to be extra cautious” with Bryant. “I don’t think there’s a great deal of concern,” Ross said. “We just want to make sure he’s good to go.” … Schwarber returned after being scratched on Wednesday with a bruised right knee.