NEW DELHI — India’s coronavirus death toll overtook Britain to become the fourth-highest in the world with another single-day record increase in cases Friday.

According to the Health Ministry, India reported 1,007 deaths in the past 24 hours. Its total rose to 48,040 deaths, behind the United States, Brazil and Mexico. 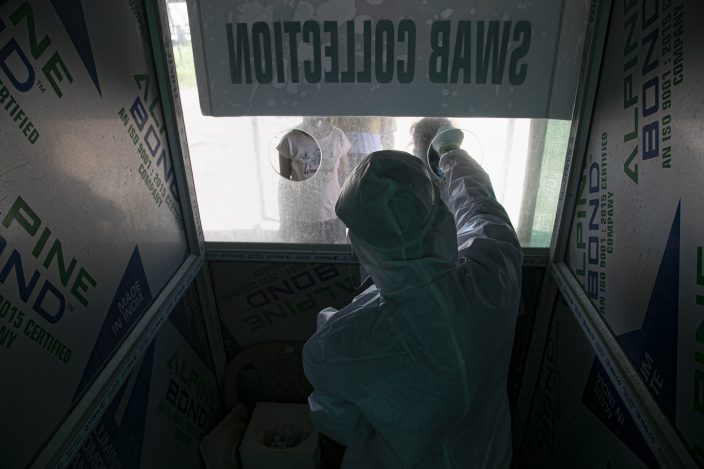 An Indian health worker takes a nasal swab sample to test for COVID-19 in Gauhati, India, Thursday, Aug. 13, 2020. India has the third-highest caseload after the United States and Brazil, but only the fifth-highest death toll, and authorities say the fatality rate has dropped below 2% for the first time. (AP PhotoAnupam Nath)

Health experts say it needs to be higher, given India’s population of 1.4 billion.

India’s two-month lockdown imposed nationwide in late March kept infections low. But it has eased and is now largely being enforced in high-risk areas. The new cases spiked after India reopened shops and manufacturing and allowed hundreds of thousands of migrant workers to return to their homes from coronavirus-hit regions. 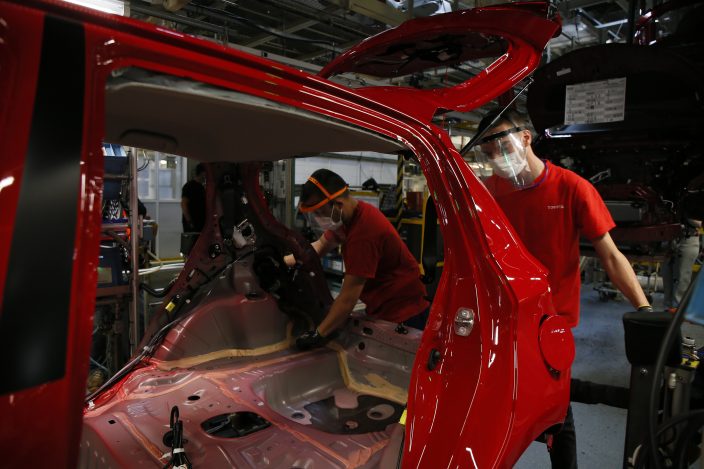 Employees wearing face masks work on a Yaris car at the Toyota car factory in Onnaing, northern France, Tuesday, April 28, 2020. Workers are returning the Toyota factory as the country tries to carefully restart an economy deeply damaged by virus confinement measures. First, the workers are being tested for the virus, given protective equipment and taught how to protect themselves from infection in the workplace. Then some of the plant's 4,500 employees start back to work. (AP PhotoMichel Spingler) 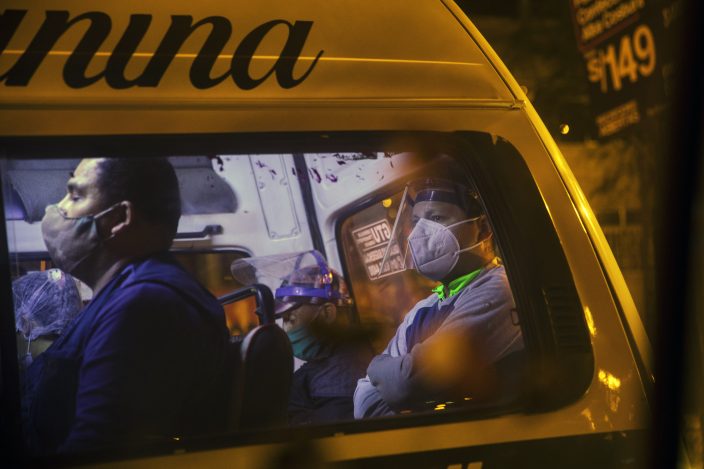 — Spain is facing another surge in coronavirus infections not even two months after beating back the first wave.

— False claims and conspiracy theories, ranging from bogus cures to the idea that the coronavirus is a hoax, have dogged efforts to control the pandemic from the beginning. While bad information is a problem for everyone, it can pose a particular threat to communities of people of color who already face worse outcomes from the virus. 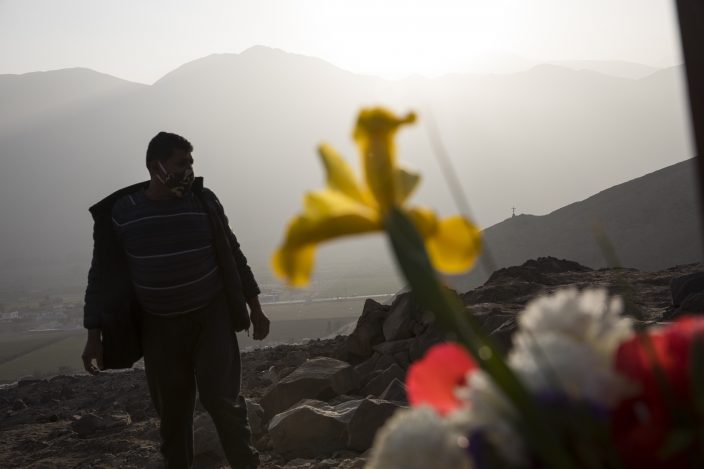 Ricardo Cabos, 50, stands next to the tomb of his friend Hercor Garcia, who died from COVID-19 complications, during a visit at a cemetery in Carabayllo, Lima, Peru, Thursday, Aug. 13, 2020. (AP PhotoRodrigo Abd) 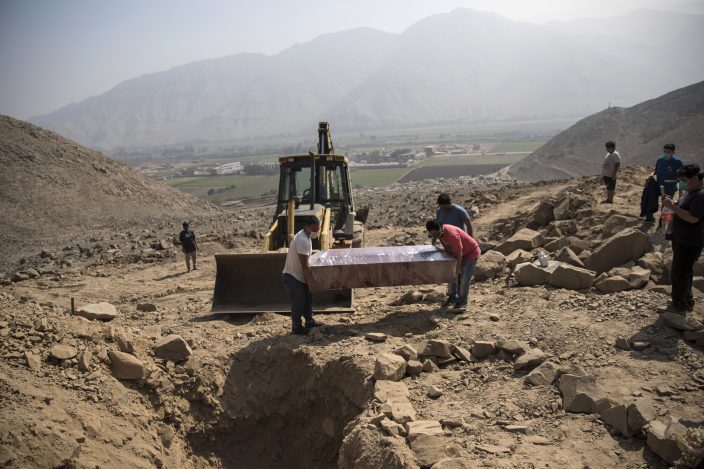 Relatives carry the coffin containing the body of Marina Salazar, 75, who died from COVID-19 complications, into her tomb at a cemetery in Carabayllo, Lima, Peru, Thursday, Aug. 13, 2020. (AP PhotoRodrigo Abd)

SEOUL, South Korea — South Korea is reporting 103 new coronavirus cases. It is one of the country’s biggest daily jumps in months, and officials are expressing concern that infections are getting out of control in the capital of Seoul and other major cities as Koreans increasingly venture out in public.

The figures released by the Korea Centers for Disease Control and Prevention on Friday brought the national caseload to 14,873 cases, including 305 deaths.

Eighty-three of the new cases were in the densely populated Seoul metropolitan area, where authorities have struggled to stem transmissions. Infections were also reported in other major cities such as Busan, Gwangju and Ulsan. 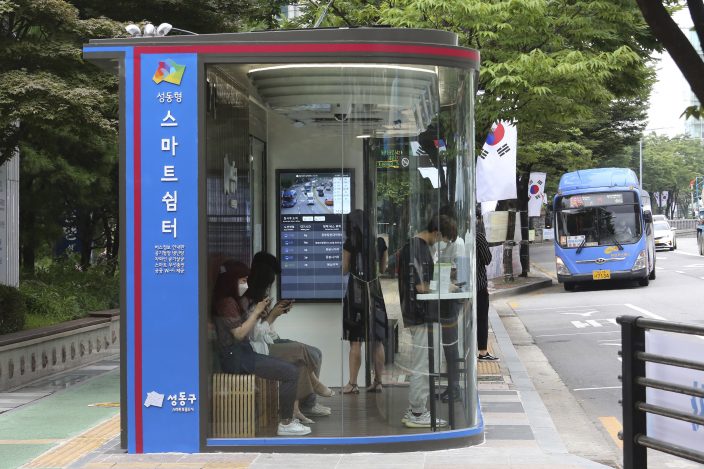 A bus shelter designed to block people with fever amid a spread of the coronavirus, is installed at a bus stop in Seoul, South Korea, Friday, Aug. 14, 2020. The glass panels-covered bus stops at a Seoul district, are equipped with thermal cameras that screen people for fevers and also automatic doors that doesn’t let in any one with high temperatures. The sign reads "Smart Shelter." (AP PhotoAhn Young-joon)

Friday’s jump was driven by local transmissions, which health authorities said could worsen because of the increase in travelers during the summer vacation season.

FRESNO, Calif. — A private school in California has been ordered to close after it reopened classrooms in violation of a state health order aimed at slowing the spread of the coronavirus.

Fresno County issued a health order Thursday against Immanuel Schools in Reedley. The K-12 school was told to close its classrooms until the county is removed from a state monitoring list for two weeks. 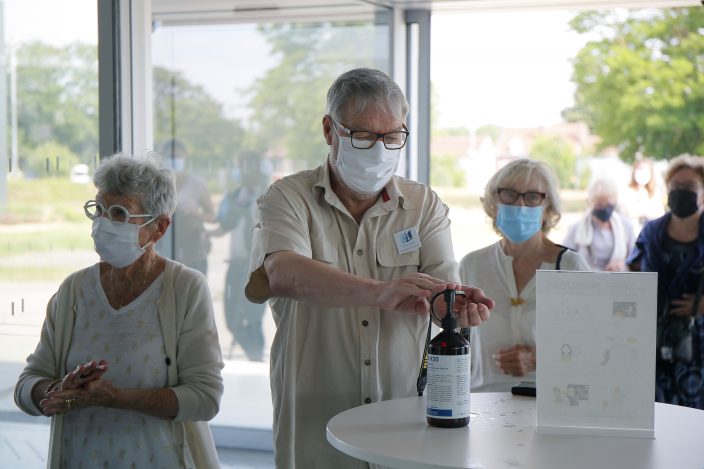 Visitors use hand gel, during the reopening of the Louvre Museum in Lens, northern France, Wednesday, June 3, 2020, as restrictions in place to control the spread of coronavirus were eased. (AP PhotoMichel Spingler)

The school has about 600 students and it allowed students into classes Thursday without masks or social distancing. The school’s trustees and superintendent say they believe students’ development will suffer if they can’t be taught on campus.

BEIJING — China has reported another eight cases of locally transmitted coronavirus infections, all in the northwestern region of Xinjiang where the country’s last major outbreak has been largely contained.

Officials said Friday that 22 other new cases were brought from outside the country by Chinese travelers returning home. China has reported a total of 4,634 deaths from COVID-19 among 84,786 cases. 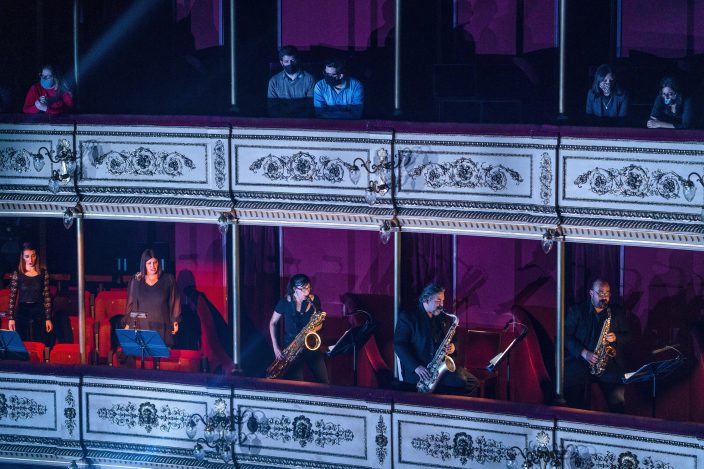 People wearing face masks amid the new coronavirus pandemic listen as musicians of the Montevideo Symphonic Band perform below them at the Solis theatre in Montevideo, Uruguay, Thursday, Aug. 13, 2020. Five months after all the live arts shows were canceled due to the pandemic, the Solis theatre reopened today for a public performance. (AP PhotoMatilde Campodonico)

Hong Kong reported 69 new confirmed cases and three deaths over the past 24 hours. The semi-autonomous Chinese city has required masks be worn in all public settings, restricted indoor dining and enacted other social distancing measures to bring down transmissions that now total 4,312 with 66 deaths. 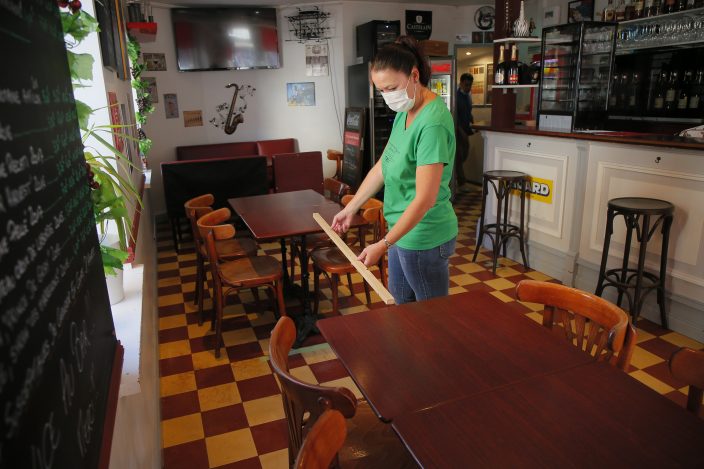 A woman measures the distance between table in a restaurant of Lille, northern France, Tuesday June 2, 2020. The French way of life resumes Tuesday with most virus-related restrictions easing as the country prepares for the summer holiday season amid the pandemic. Restaurants and cafes reopen Tuesday with a notable exception for the Paris region, the country's worst-affected by the virus, where many facilities will have to wait until June 22 to reopen. (AP PhotoMichel Spingler)

Experts agree that due to Mexico’s extremely low testing rates, those numbers are undercounts and that the real figures may be two to three times higher. With only about 1.15 million tests conducted to date in a country of almost 130 million people, less than 1% of Mexicans have been tested.

That encouraging sign Thursday was clouded by questions over testing as students return to school and college football teams push ahead with playing this fall. Testing has dropped off in Texas, a trend seen across the U.S as health experts worry that patients without symptoms aren’t bothering because of long lines and waiting days to get results.

Numbers from Texas health officials this week offer a hazy picture of how much testing has fallen. At one point this week, the infection rate in Texas was as high as 24%, only to suddenly drop Thursday to 16%.

Officials have not offered explanations about the wild swing in infection rates.

SACRAMENTO, Calif. — California will resume eviction and foreclosure proceedings Sept. 2, stoking fears of a wave of evictions during the coronavirus pandemic unless the governor and state Legislature can agree on a proposal to extend protections.

The Judicial Council of California voted 19-1 Thursday to end the temporary rules blocking such proceedings that had been in place since April 6.

Since the pandemic began in March, more than 9.7 million people have filed for unemployment benefits in California. A survey from the U.S. Census shows more than 1.7 million renters in the state could not pay their rent on time last month.

California Chief Justice Tani G. Cantil-Sakauye has been reluctant to let the rules stay in place much longer, saying it is the job of the judicial branch to interpret the laws, not make them.

LONDON — Britain will require all people arriving from France to isolate for 14 days -- an announcement that throws the plans of tens of thousands of holidaymakers into chaos.

The government said late Thursday that France is being removed from the list of nations exempted from quarantine requirements because of a rising number of coronavirus infections, which have surged by 66% in the past week. The Netherlands, Malta, Monaco and the Caribbean islands of Aruba and Turks & Caicos also were added to the quarantine list.

France is one of the top holiday destinations for British travelers, who now have until 4 a.m. Saturday to get home if they want to avoid two weeks in isolation.

The number of new infections in Britain is also rising.

Inside the church at the heart of the Louisville protes ...

The story of how the First Unitari ...