The woman accosted Yasmeen Samir as she swam with her family at a pool in a resort on the North Coast, a stretch of Mediterranean beaches reserved for Egypt’s upper echelons. The reason: Samir was wearing a burkini, a swimsuit worn by conservative Muslims to cover the entire body.

Soon other women joined in berating Samir and demanding she leave. It’s an “eyesore,” one woman barked.

It was supposed to be a dip in a pool to cool off from Egypt’s summer heat. But the incident last month turned into a national debate over what women can wear — and where — and highlighted the complicated and often contradictory pressures of class, society and religion in the conservative, Muslim-majority country. 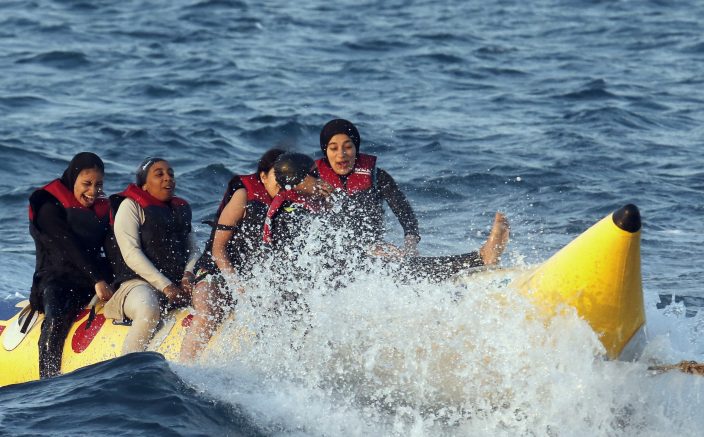 FILE - In this July 26, 2019 file photo, holiday-makers ride a banana boat at al Sokhna beach in Suez, Egypt. The burkini, a swimsuit worn by conservative Muslims to cover the entire body, is scorned in many upper class Egyptian circles where it and the headscarf is seen as lower class. Women who wear the burkini or headscarves can face discrimination in upper-class beach resorts or in bars or clubs, though across Egypt the majority of women wear conservative dress. (AP PhotoAmr Nabil, File)

“I initially panicked,” Samir told The Associated Press, but she decided to not back down. Video of the confrontation went viral, showing Samir and her husband standing in the pool and arguing with the women.

The majority of women in Egypt wear a head covering and religious authorities urge women to do so. But women who wear headscarves or the burkini face discrimination and scorn among some upper-class circles where such dress is seen as backwards and low-class.

Most bars and clubs don’t allow entrance to women in headscarves, called “hijab,” treating their presence and the serving of alcohol as mutually exclusive. In many of the private beach communities that have spread over Egypt’s coasts, burkinis are viewed with derision. Many private pools have a strict policy barring swimming in clothes, which is then extended to full-body swimsuits even if made from Lycra. 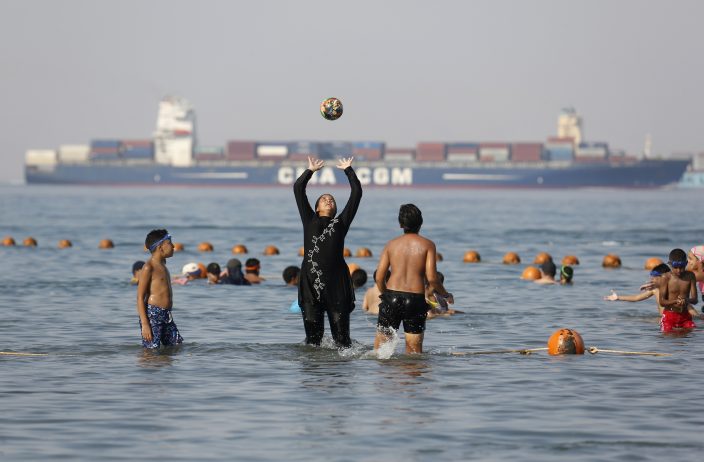 FILE - In this July 19, 2018 file photo, holidaymakers play in the Red Sea, at El Sokhna beach in Suez, Egypt, Egypt. The burkini, a swimsuit worn by conservative Muslims to cover the entire body, is scorned in many upper class Egyptian circles where it and the headscarf is seen as lower class. Women who wear the burkini or headscarves can face discrimination in upper-class beach resorts or in bars or clubs, though across Egypt the majority of women wear conservative dress. (AP PhotoAmr Nabil, File)

The flip side of the divide is also fraught. At Egypt’s few public beaches, which are frequented by lower classes, most women swim in headscarves and full-length robes, and a woman wearing a one-piece bathing suit or a bikini would face stares and harassment. A woman appearing on social media in a bathing suit can face a storm of shaming insults.

Many in the crowd that accosted Samir insisted the material of her swimsuit was unsanitary. But she says it was obvious they were merely displeased with her appearance.

In the video taken by a bystander, Samir and her husband Mostafa Hassan fend off one detractor after another. Their baby daughter was with them. Hassan later posted the video on Facebook, where it racked up over a million views and 18,000 shares, with many users voicing support of Samir. The video was also a subject of discussion on the country’s largest pro-government talk shows, which came down on Samir’s side.

Samir said she had received an outpouring of support from women online who say she’s given them courage to swim in their own burkinis.

Doaa Mohamed, who has worn the hijab for a decade, was once turned away from a bar in Cairo’s posh Zamalek neighborhood. She said that often, the ban on head coverings is thinly veiled economic discrimination.

“To establishments, women who wear the headscarf are from low or middle classes that (they) don’t want to serve,” Mohamed said.

An employee from Stella Sidi Abdel Rahman resort, where the burkini incident took place, said the resort does not have any policy against the burkini, as long as it is made from swimwear material. Egypt’s Tourism Ministry said women who face trouble because of their burkini should file a complaint to the ministry.

In 2017, Dina Eissa was in the pool of a resort compound in the Red Sea beach town of Ain Sokhna, when she was asked to leave for wearing a burkini. Her family didn’t want to make a scene, so they also told Eissa to get out of the water.

Eissa’s entire family was gathered for the Muslim Eid holiday. “I had the right to be in the water with my family,” she said.

Infuriated, she went back to the pool later, sparking another uproar, but this time she refused to leave. She wrote a widely shared post about her experience on Facebook.

Today, Eissa lives in Ohio where she goes for a 2,000 meter swim every week. No one there has ever asked her to leave because of her swimwear, she says.

Class and morality intersect in complicated and often contradictory ways in Egypt. The lower and middle classes are expected to be more conservative, so women who break that mold can face social condemnation — or worse.

Recently, nine women were arrested and several were sentenced to prison terms for damaging “family values” and “debauchery” for posting videos of themselves on the app TikTok though none of their videos would have raised eyebrows among upper class Egyptians.

For women who want to wear a bathing suit, the upper-class private beach communities — which have swallowed up most of the Mediterranean coast — are often the only option. Some compounds are known to be more accepting of burkinis, while others scorn them or see them as the thin edge of a wedge of conservativism that will be intolerant of those in bathing suits.

Yet the often cliquish and moralizing society in the compounds can also be condemning of a woman in a bikini.

Youssra Mohammed Hamouda, a teaching assistant at the American University of Cairo, said she’s gotten aggressive stares at North Coast resorts when she wore a bikini, and harassing messages when she posted a picture of herself in it on social media. An ex-boyfriend was admonished by her relatives for letting her wear a two-piece.

She attributes the attitude to deeply ingrained misogynism and classism, rather than religion.

“There is a paternalistic class system in Egyptian society, which judges the woman on the basis of which class she belongs to,” said Hamouda, who describes herself as coming from a middle-class background.

In her hijab, Doaa Mohamed has gone to clubs in several cities including Copenhagen. No one stopped her. And in her burkini, she has gone swimming in Tunisia and the United Arab Emirates.

“We should learn to live and let live in Egypt,” she says. “I don’t really get what this fuss is about.”

Baker Mayfield got the homecoming ...