Miami finally gets to play its pandemic-delayed opener at Marlins Park, which has a new look for 2020 thanks to cozier dimensions and a switch to artificial turf. Also, there will be a first-place team in the home dugout when the Marlins (8-4) host Atlanta. 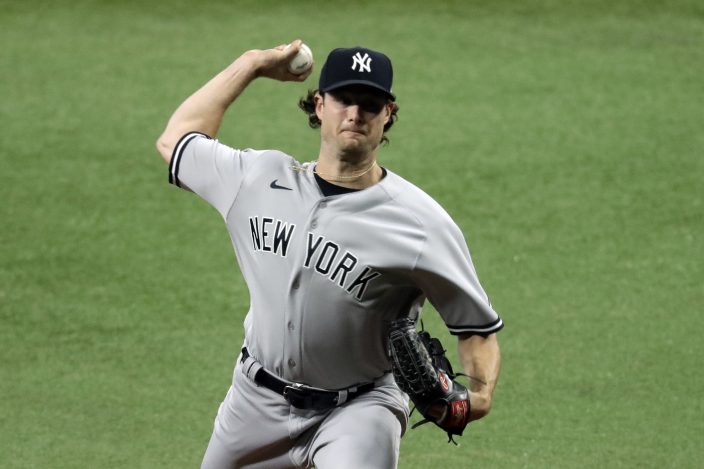 The Marlins departed for a season-opening three-game trip more than three weeks ago. Their 23-day road odyssey was necessitated by a coronavirus outbreak that infected at least 18 players during the opening weekend in Philadelphia. Miami’s season was suspended for a week and the schedule scrambled, including the postponement of eight games at Marlins Park.

“You feel like you’ve got a quick trip,” manager Don Mattingly said. “You pack hardly nothing, and the next thing you know, a month later, you’ve got to pay rent again.” 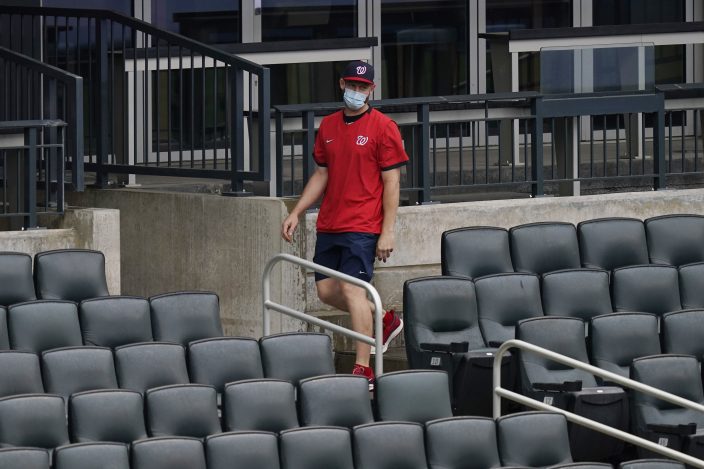 Washington Nationals pitcher Stephen Strasburg leaves the stands after being ejected for arguing balls and strikes during the third inning of a baseball game against the New York Mets at Citi Field, Thursday, Aug. 13, 2020, in New York. (AP PhotoSeth Wenig)

World Series MVP Stephen Strasburg is scheduled to make his second start of the season for the Washington Nationals at Baltimore, still dealing with a nerve issue in his pitching hand. “We’ve talked to him. He’s adamant about trying to pitch through this right now. But we’re going to keep a very close eye on him,” manager Dave Martinez said. “We’ll see how far he can get.” Strasburg said he felt the problem in his right hand while allowing five runs in the fifth inning of his season debut last Sunday.

The star right-hander was ejected from the stands Thursday during Washington’s loss to the New York Mets for arguing balls and strikes in the third inning. Strasburg, sitting in Section 121 at Citi Field in this season of social distancing, was apparently unhappy with plate umpire Carlos Torres' strike zone. The usually stoic Strasburg doffed his cap as he walked up the staircase on his way out and appeared to be grinning underneath his blue mask.

The setup Friday in Baltimore will be unusual. First, the clubs will complete a game suspended because the grounds crew couldn’t unfurl the tarp properly when it rained in the top of the sixth inning Sunday with the Orioles leading 5-2 at Washington — so the Nationals will be the “home” team for the resumption Friday — and then they’ll play the day’s originally scheduled game.

Yankees newcomer Gerrit Cole (3-0, 3.22 ERA) gets his first taste of an old rivalry and again goes for his 20th consecutive regular-season victory when New York hosts Boston in the opener of a four-game series. Cole, who signed a $324 million, nine-year contract in the offseason, is trying to tie Roger Clemens, Jake Arrieta and Rube Marquard for the third-longest streak ever. Hall of Famer Carl Hubbell leads the list with 24 wins in a row, followed by Roy Face with 22. Cole’s only loss since May 2019 came in Game 1 of the World Series last October, pitching for Houston against Washington.

One night after Dodgers teammate Mookie Betts matched a major league record by hitting three home runs in a game for the sixth time in his career, Clayton Kershaw (1-1) starts the opener of a Freeway Series against the Angels in Anaheim. Up in San Francisco, it’s the Bay Bridge rivalry as Frankie Montas pitches for Oakland (13-6) against Johnny Cueto and the Giants.

St. Louis’ series opener in Chicago against the White Sox was postponed to Saturday, giving the Cardinals an extra day to recover from a COVID-19 outbreak.

The Cardinals, who haven’t played since July 29, were finally set to resume their season Friday. But the first game of the series was pushed back to a straight doubleheader Saturday afternoon, the beginning of an extended stay in the Windy City for the Cards.

There was no word from Major League Baseball on the postponement, but John Mozeliak, the president of baseball operations for the Cardinals, confirmed the move in a conference call with reporters. Mozeliak also said the team will play doubleheaders Monday and Wednesday against the Cubs at Wrigley Field after the NL Central rivals had a series postponed last weekend.

The Cardinals’ season has been derailed by the coronavirus. Star catcher Yadier Molina and infielder Paul DeJong are among the players who tested positive. The defending NL Central champions have played just five games, winning two.

The Texas Rangers have gone four games without a home run for the first time in nearly five years. Maybe a mile-high trip will end that drought, with the Rangers opening their first series in Colorado since 2016. Texas has had 157 plate appearances — all in its spacious new ballpark with a retractable roof — since Joey Gallo’s two-run homer in the sixth inning Saturday night against the Angels in a 2-0 home victory. Arizona is the only major league team this season with a five-game homerless streak (July 25-29).

LEADING OFF: Wild, 8-game day opens with Bauer vs Fried

LEADING OFF: Playoffs begin, Bieber vs Cole in prime matchup

LEADING OFF: Ailing players heal up, Yanks back in Cleveland

LEADING OFF: NL race down to final day — and maybe Monday