Luke Walton was trying to find the right words to motivate his players to finish the season strong.

The Sacramento Kings had been eliminated from playoff contention, which was nothing new for the team with the NBA’s longest streak of missing the postseason.

Yet, even players who’d spent their whole careers with the organization had never heard the type of speech their coach made this week. This wasn’t the normal talk of playing for pride, of trying to make an impression for next season. 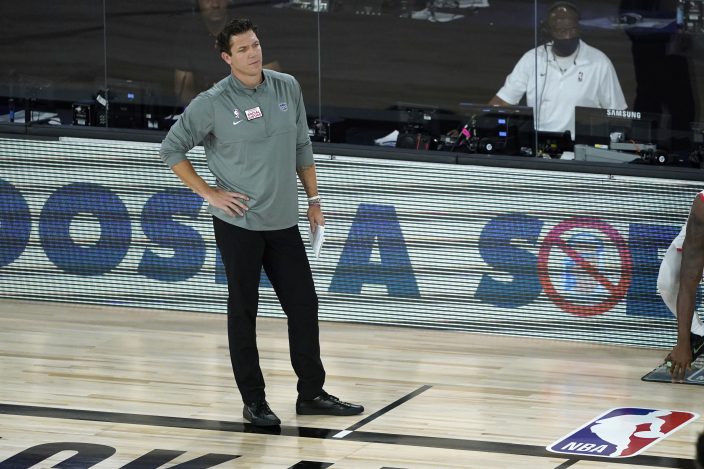 “He said something like, ‘We don’t know when the basketball is going to come back after this time,’” guard Bogdan Bogdanovic said.

The 22 teams who qualified for the NBA’s restart will be down to 16 by the end of the weekend, when the playoff bracket is set. The other six clubs exit World Disney World the same way as tourists who normally pack the place. 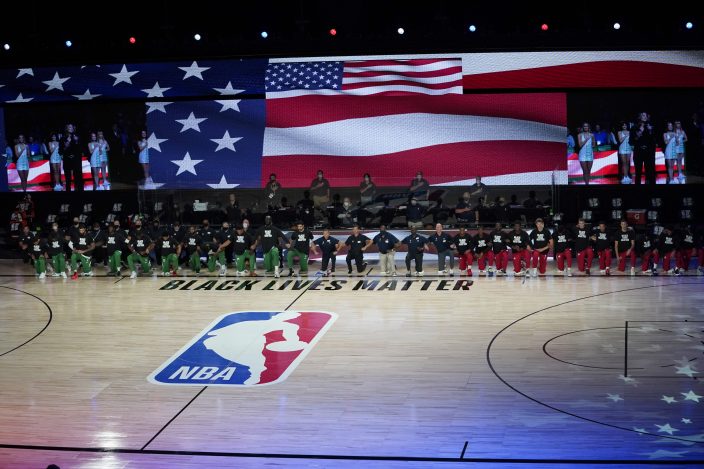 “The unknown, none of us like that,” Washington coach Scott Brooks said.

Uncertainty awaits at the end of every season for teams that miss the playoffs. Coaches might not be retained. Free agents may not be re-signed.

This time, though, the questions go far beyond simple basketball matters. The coronavirus pandemic forces teams to wonder whether they will be safe, and when — or where — they might be back together again. 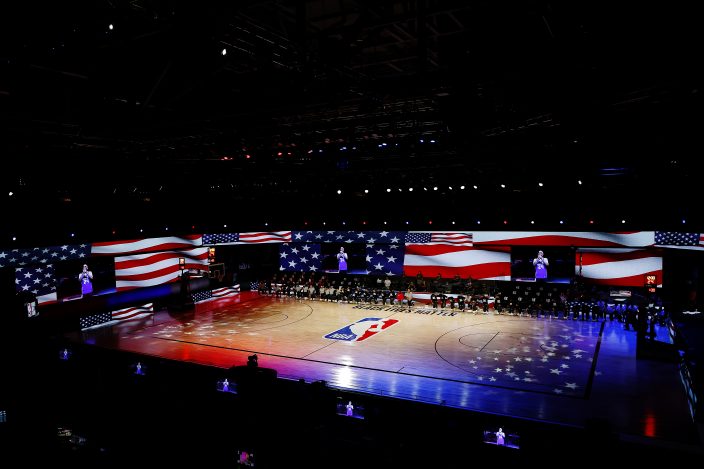 The New Orleans Pelicans and the Sacramento Kings take a knee during the National Anthem prior to the start of the game of an NBA basketball game Tuesday, Aug. 11, 2020, in Lake Buena Vista, Fla. (Mike EhrmannPool Photo via AP)

“I mean, we’re leaving the happiest and safest place on earth and it’s definitely going to be tough, but it’s also going to be exciting because we all get to see our families and that’s what we miss the most,” Brooks said. “But we don’t know what the next step is going to be.”

NBA teams have been on campus since early July and there has not been a player test positive for the coronavirus during that time. Meanwhile, the virus has raged on elsewhere in the U.S., strengthening in some places as the number of cases in the country soared past 5 million.

More than 750,000 have been killed worldwide and there have been more than 20 million known infections.

With only a limited number of people allowed inside the bubble and a commitment among them to making sure it worked, players could count on a safe environment. They were tested daily and reminders about mask wearing, social distancing and hand washing were so ubiquitous that Brooks said the Wizards could pretty much memorize the video the league gave them.

Players aren't assured of that security now. Mask wearing isn’t required in some places, not enforced in others. A common commitment to following medical recommendations is one of the reasons the U.S. has struggled so badly to slow the spread of the virus in the first place.

Walton said there is obvious concern for those already gone or on their way out of Florida.

“And I think one of the biggest challenges for us who have been in this bubble — there’s been zero positive tests and it’s been such a safe and natural movement going on throughout here — (is) readjusting to what’s happening outside of the bubble,” he said.

The Kings’ Harrison Barnes, Buddy Hield, Alex Len and Jabari Parker had already tested positive before the restart, so the Kings know the dangers of the virus. Walton said his players will need to continue following the same precautions they did while at Disney.

But there are still basketball issues.

A December start has been targeted for the 2020-21 season and the NBA would love for it to be in home markets with fans in the arenas, but those are far from guaranteed. Teams won’t be able to prepare for it in normal ways, not while they're still limited to voluntary workouts in their facilities.

“A lot of the offseason is normally based on player development, where you send coaches all over the country to work with your guys every day,” Walton said. “And a lot of that won’t be able to happen and we won’t know a start date for who knows how long.”

Concerns about the unknown, Walton noted, are being faced by people all over the world. NBA teams have been shielded for a little while, but the Pelicans, Kings and Wizards, and soon more teams, have lost that now.

They will miss out on more than playoff bonus money. They will miss the comforts of campus, the place where they had all the answers. And for a young team like the Pelicans, who already had to learn NBA life in the strangest season ever, the offseason could be even more challenging.

“Still kind of getting used to this league,” Holiday said of his teammates, “definitely in a weird year which I feel like nobody’s ever really dealt with this before, or even what’s going to happen in the foreseeable future.”

Pandemic takes toll on business of pisco producers in P ...

In the house where for decades she ...