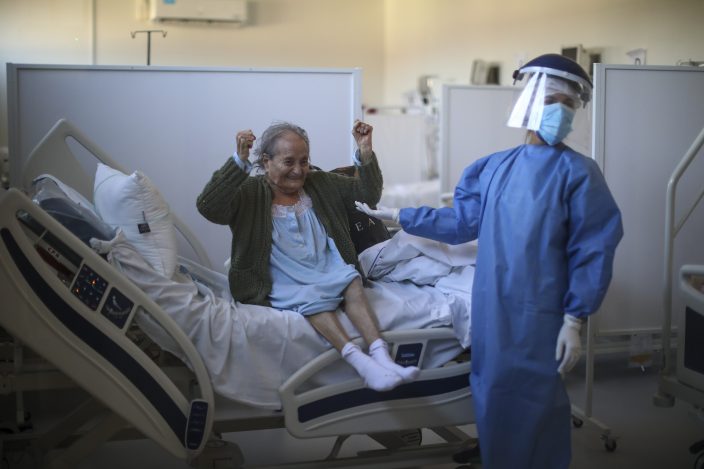 Blanca Ortiz, 84, celebrates after learning from nurses that she will be dismissed from the Eurnekian Ezeiza Hospital, on the outskirts of Buenos Aires, Argentina, Thursday, Aug. 13, 2020, several weeks after being admitted with COVID-19. (AP PhotoNatacha Pisarenko)

EMIRATES-ISRAEL — Iran’s Foreign Ministry strongly condemns an historic deal establishing full diplomatic relations between the United Arab Emirates and Israel, calling it a stab in the back to all Muslims, state TV reports. Iran, in the ministry statement, calls the normalizing of ties between the two countries a dangerous, “shameful” measure and warned the UAE against Israel interfering in the “political equations” of the Persian Gulf region. By Amir Vahdat. SENT: 380 words, photo.

ELECTION 2020-TRUMP-CONSPIRACY — President Donald Trump is giving credence to a false and racist conspiracy about Harris’ eligibility to be vice president, fueling an online misinformation campaign that parallels the one he used to power his rise into politics. By Aamer Madhani, Sara Burnett, Amanda Seitz and Jill Colvin. SENT: 990 words, photos, video. With TRUMP-HARRIS-FACT CHECK — Harris is legally eligible to serve as U.S. vice president or president.

LEBANON-INVESTIGATING THE BLAST — For many Lebanese, their greatest hope for credible answers about the massive explosion that wrecked their capital may lie with outsiders. French forensic police have joined the investigation and the FBI is expected to take part. The Lebanese government’s probe has gotten off to a shaky start, with political bickering over who will lead it, military threats to jail leakers and doubts about whether a panel appointed along sectarian lines could be fully impartial. By Zeina Karam and Lori Hinnant. SENT: 1,080 words, photos.

ELECTION 2020-KAMALA HARRIS-ORIGIN STORY — Kamala Harris’ mother, Shyamala Gopalan, died 11 years ago, but the Democratic vice presidential candidate says she still finds herself seeking her advice. “She’d tell us: ‘Don’t sit around and complain about things. Do something.’ So I did something,” Harris says. By National Writer Matt Sedensky. SENT: 2,300 words, photos. An abridged version of 860 words is also available. With ELECTION 2020-BIDEN-HARRIS — Harris bringing energy, dollars and more to Biden’s campaign.

PACIFIC WAR-75-CHILDREN OF WAR — For years, orphans in Japan were punished just for surviving the war. They were bullied. They were called trash and left to fend for themselves on the street. Police rounded them up and threw them in jail. They were sent to orphanages or sold for labor. They were abandoned by their government, abused and discriminated against. By Mari Yamaguchi. SENT: 1,260 words, photos. With PACIFIC WAR-75-JAPAN-AI PHOTOGRAPHS — Melting “frozen memories,” AI helps Japanese recall war days.

EGYPT-BURKINI DEBATE — The woman accosted Yasmeen Samir as she swam with her family at a pool in a resort on the North Coast, a stretch of Mediterranean beaches reserved for Egypt’s upper echelons. The reason: Samir was wearing a burkini, a swimsuit worn by conservative Muslims to cover the entire body. Soon other women joined in berating Samir and demanding she leave. It’s an “eyesore,” one woman barked. By Hend Kortam and Samy Magdy. SENT: 1,010 words, photos.

VIRUS-OUTBREAK-ASIA — India’s coronavirus death toll overtakes Britain to become the fourth-highest in the world with another single-day record increase in cases. SENT: 670 words, photos. With VIRUS-OUTBREAK-THE-LATEST.

VIRUS OUTBREAK-BLACK FUNERAL HOME — When the coronavirus pandemic hit California, for a few weeks the owner of Boyd Funeral Home in South Los Angeles declined to receive patients who had died from the virus. SENT: 690 words, video.

VIRUS-OUTBREAK-CALIFORNIA-GOVERNOR — California Gov. Gavin Newsom has had a summer of muddled messaging and bad news in the coronavirus fight, a trend crystallized this week by his delayed response to a data error that caused a backlog of nearly 300,000 virus test results. SENT: 930 words, photos.

VIRUS-OUTBREAK-TEXAS — Texas reports fewer than 7,000 hospitalized coronavirus patients for the first time in six weeks, but that encouraging sign was clouded by questions over testing as schools reopen and college football teams push ahead with playing this fall. SENT: 450 words, photos.

VIRUS-OUTBREAK-MEXICO-THEATERS — The few, the brave — those were the people returning this week to movie theaters in Mexico City that had been closed for four months due to the coronavirus pandemic. SENT: 440 words, photos.

TRUMP-MAIL-IN VOTING — Trump acknowledges he’s starving the U.S. Postal Service of funding in order to make it harder to process an expected surge in ballots that he worries could cost him reelection. SENT: 990 words, photos.

ELECTION 2020-DNC — Joe Biden is poised to unveil his vision for the modern-day Democratic Party in the first presidential nominating convention of the coronavirus era next week. SENT: 1,040 words, photos.

ELECTION 2020-TRUMP-BIDEN-MASKS — Trump attacks Biden for calling on governors to mandate that all Americans wear masks for the next three months. SENT: 530 words, photos, video.

PORTLAND PROTESTS — Oregon State Police are leaving Portland after a two-week assignment to help protect a federal courthouse that’s been a target of protesters during months of conflict in Oregon’s largest city. SENT: 320 words, photos.

CHICAGO VIOLENCE-CHARGES — Cook County’s state’s attorney’s office announces 42 people have been charged with felonies in connection with the looting of stores along the city’s premier retail street that occurred earlier this week. SENT: 320 words. With CHICAGO-VIOLENCE-STORE Chicago convenience store ransacked twice since May.

SLAIN SOLDIER-TEXAS — Mourners will gather in Houston to honor the life of a slain Texas soldier whose story has renewed a push for changes in the way the military handles sexual abuse and harassment from Fort Hood to Capitol Hill. SENT: 370 words, photo.

VENEZUELA-PROSECUTOR — A federal prosecutor who has jailed some of Venezuela’s biggest crooks is stepping down, The Associated Press has learned, leaving a void that could dampen U.S. efforts to expose criminal activity in the South American country amid rising tensions with the Trump administration. SENT: 860 words, photos.

PHILIPPINES-ABU SAYYAF COMMANDER — A leading terror suspect who has been linked to beheadings of hostages, including two Canadians and a Malaysian, has surrendered after being wounded in battle, officials say. SENT: 470 words, photos.

INDONESIA-STATE ADDRESS — Indonesia’s president calls on all citizens to turn the COVID-19 crisis into an advancement opportunity and pledges health care reforms in an address ahead of the country’s 75th anniversary of independence. SENT: 450 words, photo.

COLORADO-RIVER-FUTURE — The white rings that wrap around two massive lakes in the U.S. West are a stark reminder of how water levels are dropping and a warning that the 40 million people who rely on the Colorado River face a much drier future. SENT: 970 words, photos.

UNCERTAINTY AHEAD — As some NBA teams head home, players are faced with concerns about their safety and questions about their basketball futures. By Basketball Writer Brian Mahoney. SENT: 830 words, photos.

The number of locations where Texa ...

For the first time in school histo ...