Pakistan held firm against England's seam attack in a shortened session before lunch on the second day of the second test, adding 29 runs without the loss of a wicket at the Rose Bowl on Friday.

The start was delayed by 90 minutes because of morning rain in Southampton, leaving England an hour to make further inroads in the first session after reducing Pakistan to 126-5 by stumps on Day 1.

Babar Azam (45 not out) and Mohammad Rizwan (12 not out) dealt with a swinging ball as Pakistan reached lunch on 155-5, though Chris Woakes — in particular — was unlucky not to find an outside edge from a couple of superb deliveries to Rizwan. 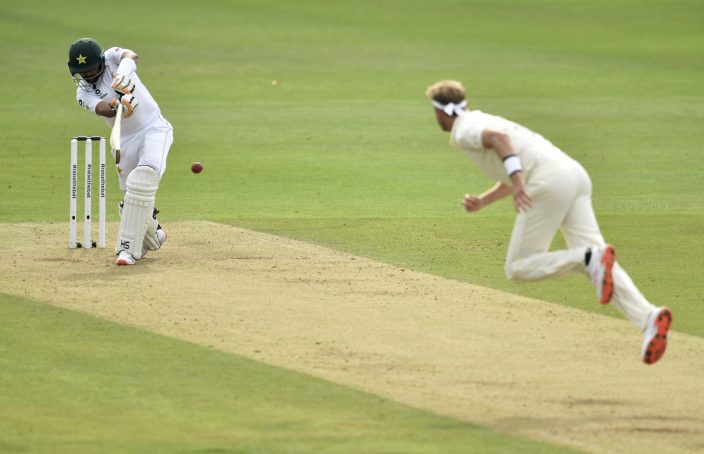 England's Stuart Broad, right, bowls to Pakistan's Babar Azam during the first day of the second cricket Test match between England and Pakistan, at the Ageas Bowl in Southampton, England, Thursday, Aug. 13, 2020. (Glyn KirkPool via AP)

Pakistan is plodding along at a run rate of 2.54, with Babar looking key to its hopes of a decent first-innings total as he approaches his 15th half-century in tests.

The tourists trail 1-0 in the three-match series after losing the first match by three wickets in Manchester. Another victory for England will clinch a first test series against Pakistan in 10 years, and a second series of this pandemic-affected summer having already beaten the West Indies.

Pakistan signs off tour of England with series-tying T20 win

Morning session washed out on Day 5 of England-Pakistan test

Anderson takes 4th wicket vs Pakistan, onto 597 in career