James Conner is tired of answering questions about his health. Really tired. The Pittsburgh Steelers running back remains adamant he can thrive in the NFL if he stays on the field.

Conner understands he can't run from his resume, which includes a trip to the Pro Bowl in 2018 as well as a string of injuries that have limited his effectiveness. He has yet to navigate a full 16-game schedule unscathed. Until he does, the doubts about his durability are going to linger. 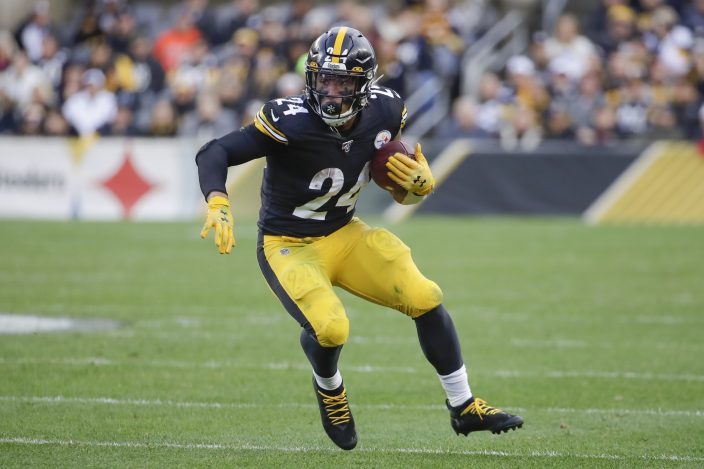 FILE - In this Dec. 1, 2019, file photo, Pittsburgh Steelers running back Benny Snell (24) plays against the Cleveland Browns during an NFL football game, in Pittsburgh. Snell wants to prove the flashes he showed last season were just a sign of things to come. (AP PhotoGene J. Puskar, File)

Conner is half right. His self-confidence is one of the reasons he morphed from a two-star prospect when he arrived at the University of Pittsburgh to a third-round pick in 2017 following a record-setting career that included a very public victory over cancer.

Yet while the Steelers — general manager Kevin Colbert, in particular — insist they agree with Conner's assessment of his potential, they have not offered him a contract extension. Conner understands he needs to prove he can shoulder a full season's worth of work. And he needs to do it despite the usual lack of preparation thanks to the limitations put in place by the NFL to deal with the COVID-19 pandemic.

During a normal summer, the Steelers would be just about ready to break camp at St. Vincent College and head back to the team's facility tucked against the Monongahela River. This summer, there are no preseason games and they won't even put on the pads until Monday, less than a month before the 2020 opener against the New York Giants.

Rarely one to shy away from contact, Conner isn't overly concerned about the lack of full-speed reps before things get going for real.

"I know what it feels like to be in a game and get tackled and have contact and all of that,” Conner said. “We’re not worried about it. It’s the same for everybody. As long as we are professionals, we will be fine.”

Maybe, but the Steelers coaching staff finds itself in a tight spot, particularly at the running back spot. Running backs coach Eddie Faulkner wants to make sure he gets a chance to assess Conner as well as Benny Snell Jr., rookie Anthony McFarland Jr. and free-agent signee Wendell Smallwood.

Doing it without seeing them compete against another team will make it difficult. So is making sure there are enough snaps to go around.

“Part of my job is to, not necessarily spread them out so much to keep away the wear and tear, but to spread them out and pick spots and see what they can do or can’t do maybe as well as the next guy,” Faulkner said. “And that helps us put it all together. It is just something that we are working through.”

Not that head coach Mike Tomlin is particularly interested in assuaging egos or bodies for that matter.

“At this juncture, I’m more concerned about putting them in situations where I can get to know them and evaluate them and see them compete than I am worried about preservation," Tomlin said.

Maybe, the Steelers know they need more from the running game after it finished 29th in the league last season. The absence of quarterback Ben Roethlisberger — who missed all but six quarters with torn flexor tendons in his right elbow — allowed defenses to crowd the line of scrimmage to stop Conner & Co.

“If they can just stack the box and run a safety down and you can’t throw over the top or you can’t keep them honest, then it is easier to stop the run,” All-Pro guard David DeCastro said. “We just weren’t good at all. So, that running game is obviously going to be a tough spot that they can just—it wasn’t even just the run game, just overall not being good.”

Roethlisberger insists he's all the way back after having surgery last September. Still, the Steelers would probably be better served to not have the 38-year-old Roethlisberger test his revamped elbow 675 times, as he did when he led the league in attempts, completions and yards passing in 2018.

Having a reliable group behind Roethlisberger would help, a list that starts with a player who suddenly finds himself as the most experienced guy in the room while also wary that he might not be in the room much longer if he can't deliver with consistency.

“You just realize you can’t get time back, you can’t get plays back," Conner said. “You always have to have that next play and next opportunity mindset. We have the opportunity now to come together during this weird time, and we are making the most out of it. We’re putting our best foot forward and just coming together. We can’t do anything about last year, so we are just looking forward to this year.”