The hype for the third heavyweight fight in the Stipe Miocic-Daniel Cormier trilogy comes with a bit of a bombastic claim -- the winner is not only the champion, but can stake his reputation as the greatest in the history of the division.

“They’re two of the best ever,” UFC President Dana White said. “Saturday you find out who’s the best heavyweight of all time. It doesn’t get any better than this."

It is billed as the super fight to end all super fights -- well, until the next one -- with good reason. The heavyweights slugged it out and traded wins in two crazy fights that had the sport frothing for a third. They’ll settle the score Saturday when Miocic defends the championship against Cormier in the main event of UFC 252 at the UFC APEX complex in Las Vegas. 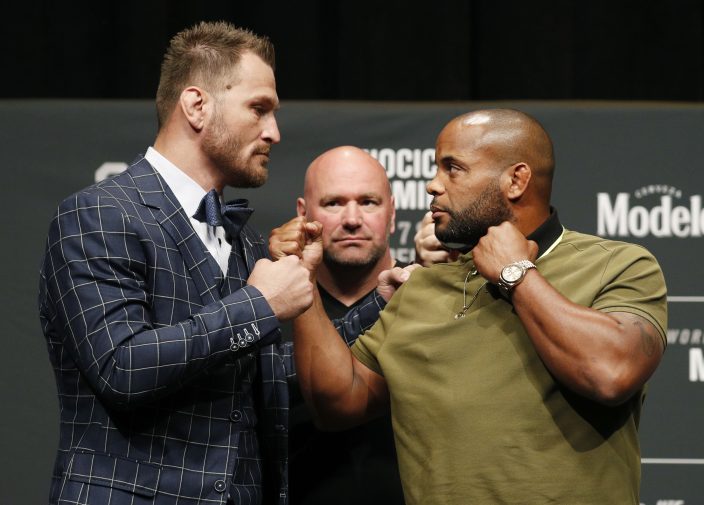 FILE - In this Thursday, July 5, 2018, filer photo, Stipe Miocic, left, and Daniel Cormier pose during a news conference for UFC 226 in Las Vegas. The trilogy fight between Daniel Cormier and champ Stipe Miocic will crown the greatest heavyweight of all time. UFC 252 Saturday, Aug. 15, 2020, in Las Vegas could be Cormier's last fight ever. (AP PhotoJohn Locher)

“We have unfinished business,” Miocic said.

Let others debate where the two truly stand on the list of greats. But what is undisputed is that both have built their resumes to make the short list of contenders for UFC’s No. 1 big man.

The 37-year-old Miocic is a two-time champion and started his second reign when he defeated Cormier last August in the rematch at UFC 241. Miocic (19-3) lost the first two rounds on every judge’s scorecard until he stopped Cormier with a barrage of punches in the fourth. 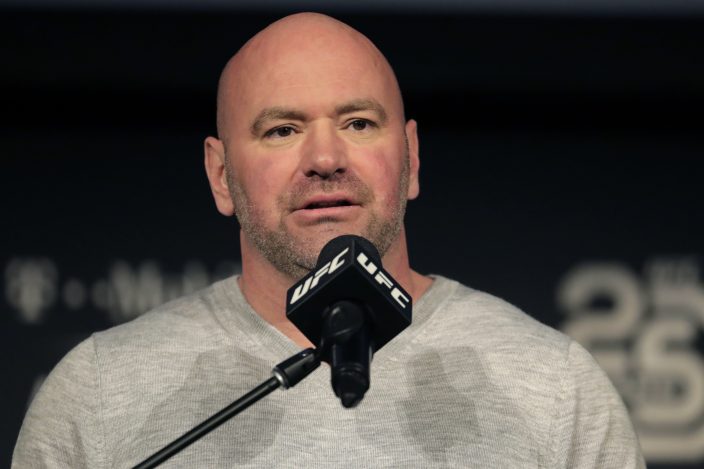 FILE - In this Nov. 2, 2018, file photo, UFC president Dana White speaks at a news conference in New York. When White first proposed holding mixed martial arts fights on an isolated island during the early weeks of the worldwide sports shutdown, fans and haters alike imagined waves lapping at an octagon perched amid palm trees on a white sand beach. A few months later, the project that came to be known as Fight Island is real, and ready for competition. And while it's not literally on a beach, the octagon at Abu Dhabi's Yas Island is inside a bubble that seems highly unlikely to burst. (AP PhotoJulio Cortez, File)

Miocic reigned as the UFC’s heavyweight champion for 26 months, and he defended his belt a UFC-record three consecutive times before Cormier dethroned him in July 2018 with a first-round stoppage victory. Despite Cormier’s decisive victory, Miocic campaigned for a rematch and eventually received it when Cormier said he “deserved it.”

Miocic continued to work shifts for the Valley View (Ohio) Fire Department during the pandemic and planned to return with the belt still around his waist.

“Getting that belt back was everything,” Miocic said.

The 41-year-old Cormier (22-2, 1 NC) is a former two-division champion and has already cemented his status as one of the greatest pound-for-pound fighters in UFC history. The amiable Cormier, who has found his niche as a successful broadcaster, has vowed to retire after Saturday and end a career in which 10 of his last 11 fights were fought with a championship on the line.

Cormier -- who never got his desired big-money bout with Brock Lesnar -- compared himself this week to Michael Jordan (Chicago Bulls edition) or Peyton Manning as the kind of star athlete who rides off into retirement sunset with a championship.

“It would put me in that type of sphere with some of the greatest athletes that have ever competed across any sport,” Cormier said. “When I win on Saturday, I will retire in that way.”

Cormier understands, though, that for all the title belts, big wins and accolades, his career might be viewed askew should he lose and finish with a 1-2 mark against Miocic and a losing mark against light heavyweight champion Jon Jones. Cormier lost both fights to Jones, his big, bitter rival, with the second one overturned when Jones failed a doping test. The result was changed to a no contest.

Cormier says the losses to Jones and Miocic have lingered longer than he’d like to admit.

“I’m a guy with a big ego and that would suck,” Cormier said. “I’ve got to be honest. To think that there would be two guys in my career that were better than me and I had multiple chances to beat them and I didn’t get it done.”

Walk out of the octagon a champion, and he’ll retire as champ — though count White among the many who don’t believe Cormier will actually quit.

“Dana doesn’t just go, ‘D.C. I love you. You’re a great guy. Fight for all these championships,’” Cormier said. “I earned these opportunities. All these tough guys I’ve fought ... that’s all earned.”

UFC defended itself from early criticism that it should have punted on holding fight cards during the pandemic and has run some of its most successful cards in recent years, in both quality and pay-per-view buys. It’s no wonder White has promoted the bout as “the best trilogy” in UFC’s history. It’s the one Miocic plans to win and continue to reign as champ -- and strengthen his legacy as the greatest.

“I’ve worked too hard to give it up,” Miocic said.