Kyle Lowry spent 13 years chasing an NBA championship before finally getting the ring. His career is closer to the end than the beginning. He’s made his money. His jersey will sway from rafters in Toronto one day. He’ll be a candidate for the Basketball Hall of Fame a few years after retiring.

It begs the question: What’s left?

Getting that first NBA title last season finally satisfied one quest for the Raptors’ point guard — but also whet his appetite for another one. So now the defending champions are returning to the NBA playoffs, with their on-court leader determined to win the whole thing once again.

“That feeling is unmatched,” Lowry said. “Other than my children being born, I don’t think I’ve had a feeling like that, ever. And that’s the motivation to keep doing that.”

He’s shown all season that the fire is real, too. 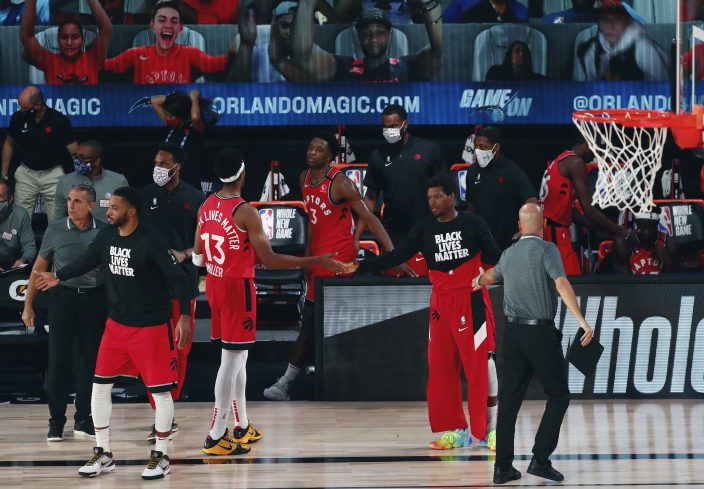 Now 34 years old, Lowry led the Raptors — who lost NBA Finals MVP Kawhi Leonard and fellow starter Danny Green in free agency last summer — to the best regular-season record in their franchise’s history. It's something few would have thought was possible given that sort of roster turnover. He was an All-Star for the sixth consecutive season. He earned All-NBA and All-Defensive Team votes; the league has yet to announce the makeup of those squads.

Lowry averaged 19.7 points, 7.5 assists and 5.0 rebounds per game this season. The only other players in NBA history, at his age or older, to do that over a full year are LeBron James and Larry Bird.

“He’s got the ultimate respect from me and our franchise, to keep on competing every single year and then finally get over the mountaintop last year,” Miami coach Erik Spoelstra said. “I think he’s a big winner in this league. He competes so hard ... diving around, taking charges, throwing his body into the fray, all of it to try to help his team win.”

The numbers prove all that.

For the second time in three years, Lowry — listed at 6-foot-1 and 196 pounds, which means he’s half a foot shorter and 30 pounds smaller than the average NBA player — led the league in charges drawn. He takes them in preseason games. He takes them in scrimmages. He takes them in All-Star Games. And he fears nobody; he even tried to take one earlier this month from James, the Los Angeles Lakers’ 6-8, 270-pound freight train.

Raptors coach Nick Nurse still cringes a little when Lowry tries things like that, but after being around him for seven years knows those habits won’t be broken now.

“He knows how to do it just right,” Nurse said. “He usually bounces up.”

It’s just one of the many ways that Lowry sets the example for the Raptors. He's far from their lone star: Pascal Siakam is an All-Star and rising name in the league, Marc Gasol is the veteran big man who fits perfectly in Toronto's scheme, Fred VanVleet is the super-tough wing who seems certain to get a serious pay raise this summer.

But Lowry runs the show.

He's the point guard, the quarterback, the coach on the floor, the locker-room voice when one is required. He also is the face of the franchise, the player who has been through the ups and downs in Toronto from an epic championship parade to annual playoff disappointments that made fans wonder if the breakthrough was ever coming.

“I would like (teammates) to really copy him more,” Nurse said. “I mean, like really block out like he does and take more charges and all that kind of stuff. They do play with a good amount of energy and effort and connectivity because of him out there doing it and directing traffic and such. I wish they really emulated him on some stuff.”

Nurse said the Raptors never were swayed by preseason notions that, with Leonard gone, the champions would fall off the cliff of NBA relevance. He didn’t have to worry about it, either; the Raptors were 17-5 last year without Leonard, and Nurse knew that Lowry wouldn’t allow the room to slip.

The roster is different, sure, but the mission is the same.

“We’re the same exact team,” Lowry said. “We play hard. We go out there and we defend. We’ve got pros. We’re just trying to win every single game. That’s what we’ve always done.”

The second-seeded Raptors drew Brooklyn in the first round of the Eastern Conference playoffs, a series that begins Monday. Back in 2014, Brooklyn was also the opponent in Lowry’s first playoff series with the Raptors — a matchup where Toronto lost a Game 7 at home.

The sting lasted a while; Toronto got swept out of the playoffs the next season. But the Raptors are the only team in this year’s playoff field to have won at least one series in each of the previous four years, a streak they’ll be heavily favored to extend this season.

“We play to provide for our families and do what we can for our communities,” Lowry said. “But we play to win championships. We play for a higher level and now we’re playing for social injustices and keeping that conversation going. But we’re also playing to win a championship.”