The firm, Scale Capital, said it reached a deal with the AT&T subsidiary DirecTV Latin America to take over the subscription service, providing services to 2 million subscribers across Venezuela — more than 40 percent of the country's subscription TV market.

“We are very excited about this launch and we want to thank all parties for their support,” Scale Capital’s director Jacopo Bracco, said in a statement. The firm’s website lists its address as Santiago, Chile. Dallas-based AT&T did not immediately respond to a request for comment. 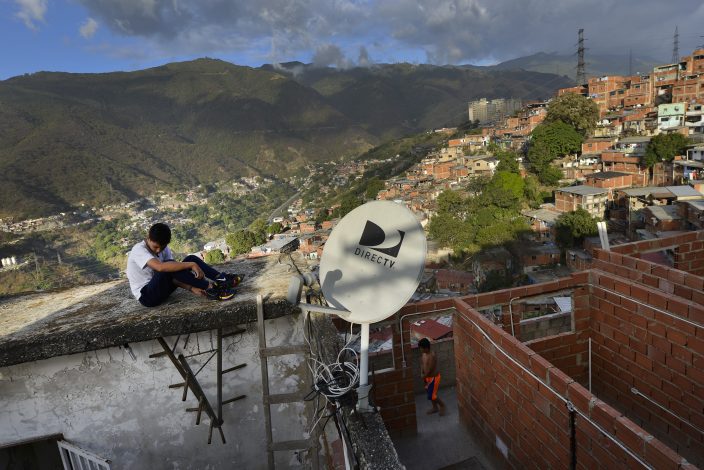 FILE - In this Jan. 9, 2020 file photo, a DirectTV dish stands on home in the Catia neighborhood of Caracas, Venezuela. AT&T, one of the last major American companies still operating in Venezuela, said Tuesday, May 19, 2020 it will immediately abandon Venezuela’s pay TV market, as U.S. sanctions prohibit its DirecTV platform from broadcasting channels that it is required to carry by the Venezuelan government, making it impossible to comply with the legal requirements of both countries. (AP PhotoMatias Delacroix, File)

DirecTV abruptly ditched its popular satellite TV service on May 19, citing U.S. sanctions that prohibited DirecTV from broadcasting channels that were required by Maduro’s administration. It is unclear whether the two channels — Globovision and PDVSA — will be aired.

The administration of President Donald Trump is running what it calls a “maximum pressure” campaign aimed at ending the socialist leader’s rule, saying saying he has has led the once wealthy oil nation into ruin.

The abrupt end to DirecTV service prompted Venezuelan officials to accuse the company of denying its citizens rights to information.

A month after the TV service stopped, Venezuelan authorities jailed three Venezuelan DirecTV executives. One of them, Carlos Villamizar, said before surrendering to authorities that he was innocent because he had no prior knowledge of the decision made by executives in the United States.

With the new deal, one of the three men had been released from jail, said a source familiar with the case who spoke on condition of anonymity because he was not authorized to talk. The source said the other two should also soon go free.

Also Friday, a coalition of nations including the United States, the European Union and many countries across the Americas published a statement urging a return to democracy in Venezuela repeated a call for fresh presidential elections.

Many of the countries were also from the Lima Group and the International Contact Group that had formed to help seek a solution to Venezuela's political and economic crisis that has led to roughly 5 million resident flee.

Many of those nations recognize opposition leader Juan Guaidó as the country's legitimate interim leader, arguing Maduro's reelection was fraudulent.

The statement called on all Venezuelan political parties and institutions to take steps toward creating a transitional government to hold a fresh election.

“We call for an end to all political persecution and acts of repression,” the statement says. “The current pandemic and Venezuela’s overwhelmed public health care system have added urgency to the need to end the status quo.”

Maduro's government has set congressional elections for December 6 to seat new members of the National Assembly, the last branch of government controlled by Guaidó's opposition coalition. The opposition recently said it will boycott the vote, calling it a “farce.”

In a sign of mounting pressure against Maduro, the European Union said Tuesday it won’t send observers to monitor those elections, citing a lack of fair conditions.

Maduro's government did not immediately respond to the call for a fresh presidential election. The socialist leader often accuses Washington of leading a campaign against his socialist nation to install Guaidó as its “puppet” aimed at exploiting Venezuela's vast oil wealth.