The Minnesota Vikings conducted their first official practice of the season Friday, and Dalvin Cook was a full participant.

The NFL's latest running back contract conundrum appears to be on track for resolution without a public clash between team and player.

“The Vikings and my agent are working extremely hard, and that side’s going to take care of whatever they’ve got to take care of,” Cook said. “I’m just continuing to work my tail off and lead a young, hungry group that’s ready to go work and get this thing done for Minnesota. I love being in Minnesota, since I got here.” 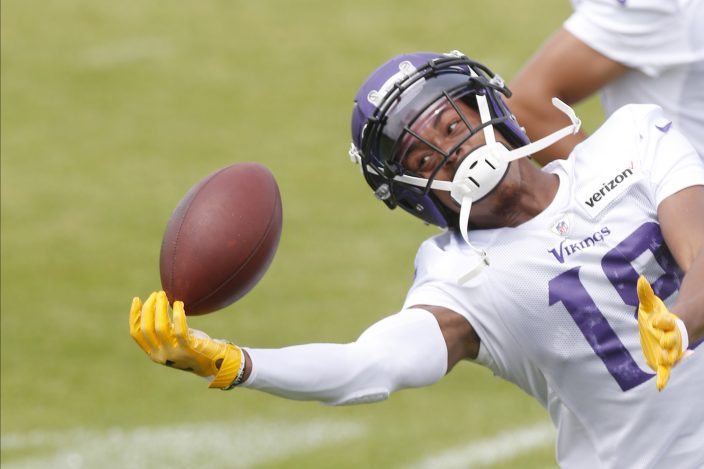 The 2017 second-round pick has entered the final year of his rookie deal, coming off his first Pro Bowl selection after finishing seventh in the league with 1,654 yards from scrimmage in just 14 games. The Vikings have been pressed for salary cap space over the last two seasons, since several core players came due for their second contract and they spent big on quarterback Kirk Cousins in free agency.

Given the short shelf life for running backs, there's been question about the wisdom of a longer-term investment in Cook, who has missed 21 of a possible 52 career games including the playoffs due to injuries. New offensive coordinator Gary Kubiak, though, has a run-first philosophy to set up the play-action passing attack from Cousins. From top to bottom in the organization, Cook has received but nothing praise since he arrived from Florida State.

He is frequently a prominent subject on team promotional materials, and head coach Mike Zimmer has already committed to naming him a team captain. 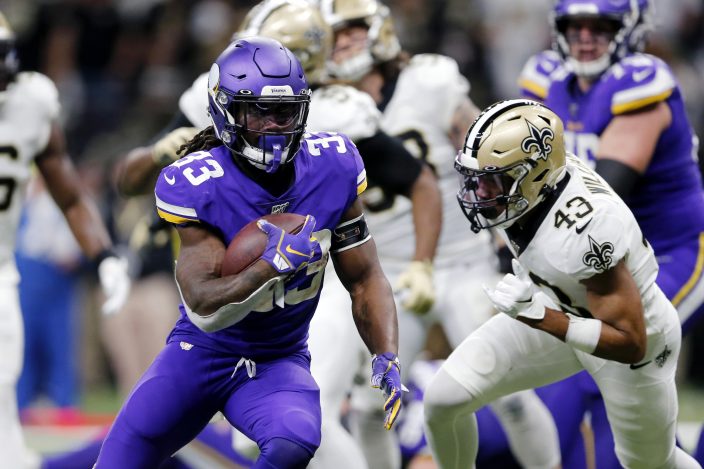 FILE - In this Jan. 5, 2020, file photo, Minnesota Vikings running back Dalvin Cook (33) carries for a touchdown in front of New Orleans Saints free safety Marcus Williams (43) during the first half of an NFL wild-card playoff football game in New Orleans. The Vikings are banking heavily on Cook this season, and he is counting on a new contract. (AP PhotoBrett Duke, File)

“Dalvin is a great person. He’s a really good leader in the offensive room. He’s good with all his teammates. He loves to play the game of football. I think he’s done a good job,” Zimmer said. "Everybody wants to get a new contract. Obviously, that’s not my issue, but I love the kid and hope he gets whatever he deserves.”

Cook logged off early from the virtual offseason program when talks stalled. After Cook's camp made noise about a holdout from training camp in lieu of a long-term deal, he arrived on time without a fuss, unlike recent conflicts between Melvin Gordon and the Los Angeles Chargers and Ezekiel Elliott and the Dallas Cowboys.

“This is where I want to be at. This is what I love to do. I was going to be here regardless of whatever the speculations came up,” Cook said.

Because of a provision in the new collective bargaining agreement, staying on the sideline this summer to try to force a new contract would have made much less sense for Cook than it did for Elliott or Gordon or any of his other high-profile predecessors at this high-danger position. Doing so would delay Cook's eligibility for unrestricted free agency by a year, and he'd also be subject to daily $50,000 fines. Cook will make a base salary of slightly more than $1.3 million this season.

The Vikings could always wait this out if no deal is reached and apply the franchise tag for next year without risk of losing him, but Cook said he's not concerned by that possibility. He even said he hasn't investigated an insurance policy to this point.

“I think I’m the insurance policy: me, myself. I’m ready to go. I’m ready to play football,” Cook said. “Injuries come with the game. It’s just how you deal with them.”

After being set back by knee, hamstring and shoulder injuries over his first three seasons, Cook has added muscle to try to combat further tolls to his body.