Suburban Atlanta's Stone Mountain Park, home of a giant sculpture of Confederate leaders, says it will close its gates Saturday in the face of a planned right-wing rally.

The event has sparked fears of violence, especially before an all-Black militia said earlier this week that it would cancel plans to show up. Other groups were still planning to counterprotest.

Pro-Confederate, white supremacist and other right-wing groups had planned their event in response to a march by the Black militia group on July 4. 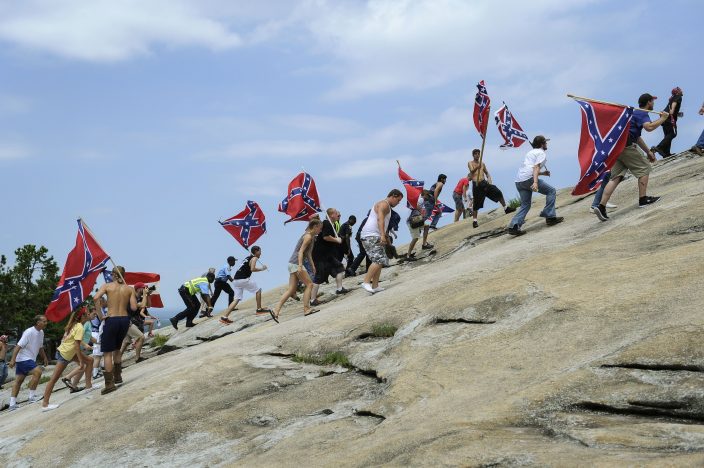 FILE - In this Aug. 1, 2015, file photo, Confederate flag supporters climb Stone Mountain to protest what they believe is an attack on their Southern heritage during a rally at Stone Mountain Park in Stone Mountain, Ga. The suburban Atlanta park that's home to a massive carving of Confederate leaders says it will close its gates Saturday, Aug. 15, 2020, in the face of a planned right-wing rally. (AP PhotoJohn Amis, File)

Last year, the park also closed down rather than allow a rally organized by white supremacists to go forward.

The organizers were led by an Arkansas group called Confederate States III%, which applied for a permit. But Stone Mountain Memorial Association spokesperson John Bankhead said the park denied the permit on Aug. 4. The denial cited a violent clash between groups in April 2016. Bankhead said the park has not received any other permit applications. He said police would be present to keep demonstrators away.

Officials in the adjoining city of Stone Mountain advised people Friday to stay away from the city all day, residents to stay home and businesses to shut down.

“Do not confront the protesters,” the city wrote in a public announcement posted on social media.

“Please know that the city’s local law enforcement agency is managing the situation and has devised a plan for the protection of life and property,” the announcement continued. “Every effort is being made to ensure that any demonstrations conducted within the city’s limits are performed peacefully and without incident.”

The 100 to 200 protesters, many of whom carried large rifles, were peaceful.

Although the park has historically been a gathering spot for white supremacists, the adjoining city of Stone Mountain has a majority-Black population today.

The park at Stone Mountain markets itself as a family theme park rather than a shrine to the “Lost Cause” mythology that romanticizes the Confederacy as chivalrous defenders of states’ rights. It's a popular recreation spot for many families on the east side of Atlanta, with hiking trails, a golf course, boat rentals and other attractions. The park has long been known for its laser light shows, but those have been canceled because of the COVID-19 pandemic.

Police move in after fights break out during Georgia protest