Brad Miller hit a tiebreaking two-run double in the seventh inning, and the St. Louis Cardinals beat the Chicago Cubs 3-1 on Monday in the opener of an unusual five-game series between the NL Central rivals.

The game was tied at 1 when St. Louis loaded the bases with none out in the seventh against Kyle Hendricks. After Dylan Carlson bounced into a forceout at home, Hendricks (3-2) was replaced by Rowan Wick.

Miller then hit a liner toward the gap in left-center. Center fielder Albert Almora Jr. made a leaping try, but it landed out of his reach on the warning track. Tyler O'Neill and Matt Carpenter scored before Carlson was thrown out at the plate. 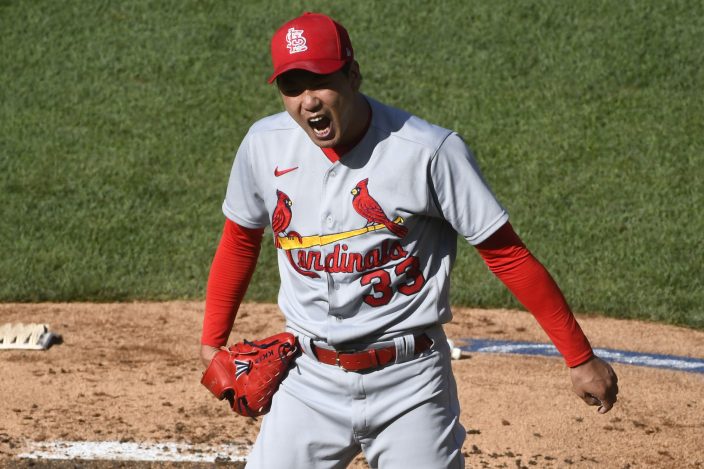 St. Louis Cardinals starting pitcher Kwang-Hyun Kim yells after he delivers during the first inning of Game 1 of a baseball doubleheader against the Chicago Cubs, Monday, Aug. 17, 2020, in Chicago. (AP PhotoMatt Marton)

Giovanny Gallegos pitched a scoreless inning for the win in the doubleheader opener. Andrew Miller got three outs for his second save.

St. Louis improved to 3-1 since it returned Saturday after a coronavirus outbreak derailed their season, leaving them idle for weeks and resulting in 18 confirmed cases in the organization. The Cardinals were supposed to host the Cubs from Aug. 7-9, but that series was postponed — leading to the five-game set that includes two doubleheaders and two “home” games for St. Louis at Wrigley Field.

Ian Happ homered for Chicago in its fourth straight loss. Hendricks was charged with three runs and three hits. 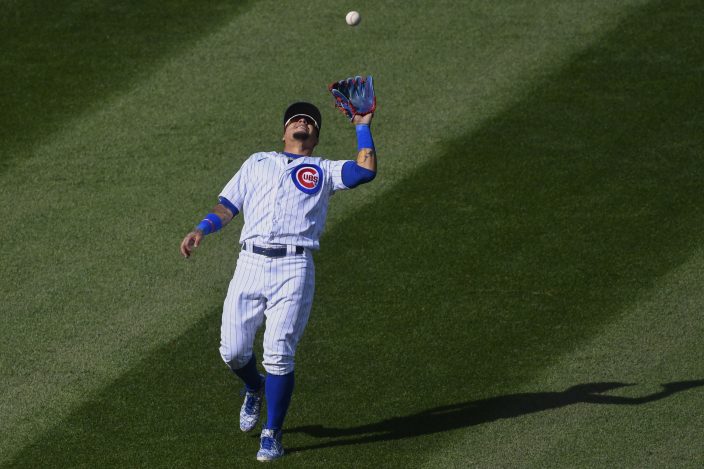 Kwang Hyun Kim pitched 3 2/3 innings of three-hit ball in his first start for St. Louis. He signed an $8 million, two-year contract with the Cards in December.

Hendricks retired his first seven batters before Dexter Fowler hit a drive to right in the third for his second homer.

The Cubs wasted a prime scoring opportunity when Happ struck out on three pitches and David Bote grounded out in the first, leaving the bases loaded. But Happ bounced back with a leadoff drive to left in the fourth for his fourth homer.

Happ was a late addition to the Game 1 lineup after right fielder Steven Souza Jr. was scratched with right hamstring tightness.

The Cardinals optioned right-hander Roel Ramírez to their alternate training site a day after he surrendered four consecutive homers in his major league debut. The 25-year-old Ramírez will remain with the team in Chicago on its taxi squad. He yielded consecutive drives by Yoán Moncada, Yasmani Grandal, José Abreu and Eloy Jiménez in the fifth inning of the Cardinals’ 7-2 loss to the White Sox on Sunday.

Cardinals: RHP Carlos Martínez and INF Edmundo Sosa have been cleared to begin baseball activities. Sosa tested positive for the coronavirus, and Martínez was placed on the injured list for an unspecified reason. Manager Mike Shildt said the team has “multiple players” pending review by Major League Baseball, including C Yadier Molina and INF Paul DeJong. ... LHP Austin Gomber “will be activated soon, with an eye toward” Wednesday's doubleheader, Shildt said. Gomber has not tested positive for COVID-19, but he was placed on the injured list because of a potential concern in contact tracing.

Cubs: LHP José Quintana (thumb surgery) threw 61 pitches over four innings in a simulated game Sunday. Manager David Ross said they are finalizing the day for his next sim game. “All things seem well and good,” Ross said. ... RHP Adbert Alzolay was in the mix for Game 2 of the doubleheader before he took a ball off his forearm a few days ago at the team's training site in South Bend, Indiana. He could start one of the games in Wednesday's doubleheader.

The Cardinals were waiting to see what happened in the opener before deciding on a Game 2 starter. Right-hander Tyson Miller will make his major league debut for the Cubs in the second game. He was recalled from the team's alternate training site to serve as the 29th man for the doubleheader.