Authorities in Mauritius have arrested the captain of the Japanese ship that ran aground near Mauritius and spilled 1,000 tons of oil on the Indian Ocean island's protected coastline.

Sunil Kumar Nandeshwar, captain of the MV Wakashio and who is from India, was charged with “endangering safe navigation” and is in custody pending a bail hearing next week, Police inspector Sivo Coothen said Tuesday.

The ship's first officer was also charged and is being held, he said. 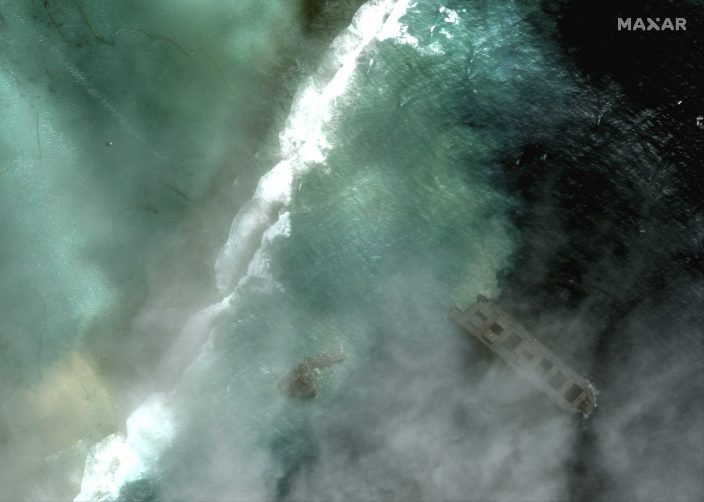 This satellite image provided by 2020 Maxar Technologies on Tuesday Aug. 18, 2020, seen through cloud cover an aerial view of the MV Wakashio, a bulk carrier ship that recently ran aground off the southeast coast of Mauritius. Officials say the grounded Japanese ship that leaked tons of oil near protected areas off the Indian Ocean island nation of Mauritius, has split apart with remaining fuel seen spreading into the turquoise waters. (2020 Maxar Technologies via AP)

“We are carrying out a full investigation and interviewing all the crew members,” Coothen said.

The Wakasio ran aground a coral reef on July 25 and after being pounded by heavy waves for several days the vessel cracked and started leaking oil on August 6. The damaged ship spilled more than 1,000 tons of its cargo of 4,000 tons of fuel into the turquoise waters of the Mahebourg Lagoon, one of the island’s most pristine coastal areas.

Most of the remaining 3,000 tons of fuel was pumped off the ship before it split into two but environmental groups warned that the damage to the surrounding coral reefs could be irreversible. 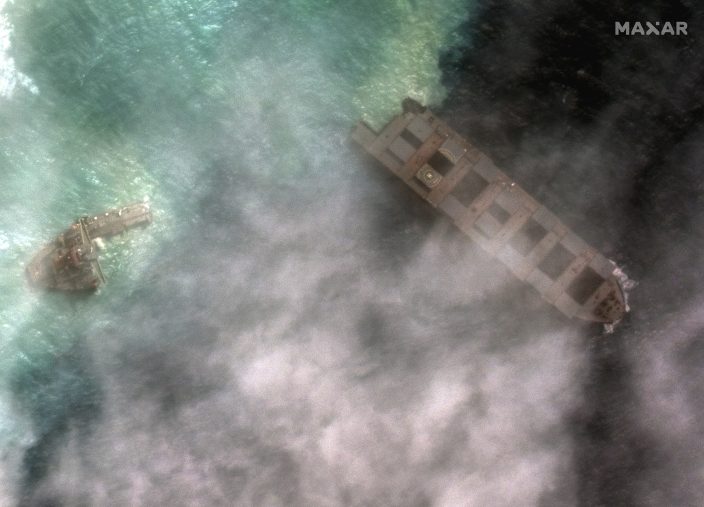 This satellite image provided by 2020 Maxar Technologies on Tuesday Aug. 18, 2020, showing an aerial view of the broken MV Wakashio, a bulk carrier ship that recently ran aground off the southeast coast of Mauritius. Officials say the grounded Japanese ship that leaked tons of oil near protected areas off the Indian Ocean island nation of Mauritius, has split apart with remaining fuel seen spreading into the turquoise waters. (2020 Maxar Technologies via AP)

The Wakashio was meant to stay at least 10 miles (16 kilometers) from shore but it ran aground just a mile from the island. Owner Nagashiki Shipping is investigating why the ship went off course and it has sent experts to help clean up the damage. The Mauritius government is seeking compensation from the company.

The Mauritius government is under pressure to explain why immediate action wasn’t taken to empty the ship of its fuel before it began to leak. Prime Minister Pravind Jugnauth earlier blamed bad weather for the slow response.

Environmentalists in Mauritius are objecting to plans to pull the bow of the ship — the smaller part of the Wakashio — out to sea and allow it to sink. The larger part of the ship will be dragged off the coral reef where it ran aground and towed away, possibly to India for salvage. 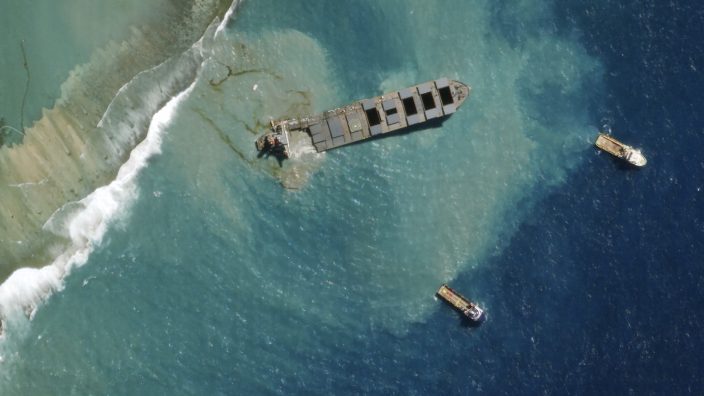 This satellite photo provided Monday Aug. 17, 2020 by 2020 Planet Labs, Inc. shows the MV Wakashio, a bulk carrier ship that recently ran aground off the southeast coast of Mauritius, Saturday Aug.15 2020. The grounded Japanese ship that leaked tons of oil near protected areas off this Indian Ocean island nation has split apart, with remaining fuel spreading into the turquoise waters. ( 2020 Planet Labs, Inc via AP)

“Authorities say they will tow the bow eight nautical miles out to sea and sink it in the waters that are 2,000 feet deep,” said Sunil Dowarkasing, an environmental consultant and former member of parliament in Mauritius.

“But that area is where whales give birth and nurse their young,” said Dowarkasing. “The sunken bow could badly affect that critical area. So the environmental impact of that plan should be fully considered.”

The Mauritius government has closed off the coastal area of the eastern part of the island, where thousands of civilian volunteers worked for days to try to minimize damage to the Mahebourg lagoon and protected marine wetlands polluted by the spilled fuel.

Only officials and hired workers are permitted to work in the coastal area and the waters surrounding the grounded ship.

Experts from France, Japan and the United Nations are also involved in the clean-up work.

U.N. spokesman Stephane Dujarric said the U.N. Development Program has allocated $200,000 to address the immediate impact of the spill.

The International Maritime Organization, the U.N. Environment Program and the U.N. humanitarian office have deployed an oil spill expert to support the government, Dujarric said. And U.N. agencies are also supporting the public health response, assessing the risks to communities, providing forensic investigation and legal support, and using U.N. satellite imagery and analysis to help with remote mapping.

After the government declared an environmental emergency, thousands of volunteers rushed to the shore to create makeshift oil barriers from tunnels of fabric stuffed with sugar cane leaves and even human hair, with empty plastic bottles tucked in to keep them afloat.

The island nation of some 1.3 million people relies heavily on tourism and already had taken a severe hit due to travel restrictions during the coronavirus pandemic.