Matt Carpenter belted a grand slam and the St. Louis Cardinals beat the Cubs 9-3 in Game 1 of a doubleheader on Wednesday, holding Chicago to two hits even though a shaky Jack Flaherty couldn’t make it out of the second inning.

Flaherty gave up a leadoff homer to Ian Happ and recorded just five outs in his first start since a season-opening win over Pittsburgh.

The right-hander struggled to locate his fastball and issued what he described as “pretty out-of-character walks.” But he got plenty of help. 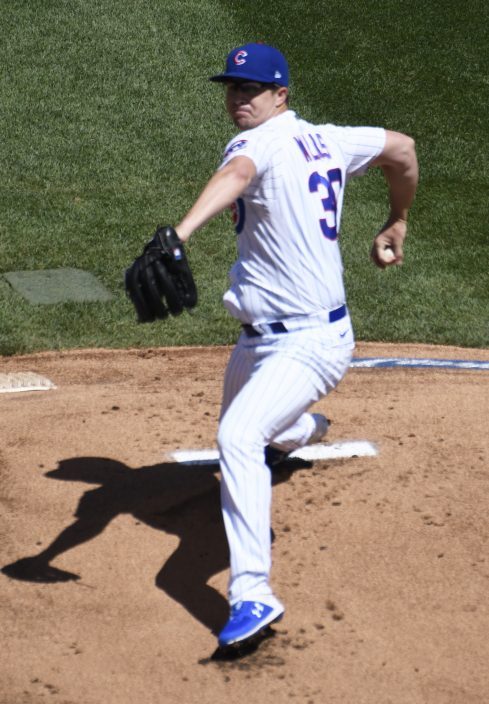 “The offense was really fun to watch today,” Flaherty said. "Going out there in the first and putting up a four spot and kind of giving me a little bit of room to breathe and go out and work on executing pitches. They didn’t stop there, though. When you get four in the first it’s real easy to kind of call it a day, but they kept going at it.”

Carpenter drove a rope to center in the first against Alec Mills (2-2) for his second career grand slam. Tommy Edman had three hits and Kolten Wong scored four runs.

Flaherty threw 41 pitches, walked two and exited with the bases loaded after hitting Nico Hoerner with an 0-2 pitch. Austin Gomper struck out Happ to end that threat and escaped another bases-loaded jam in the third when Jason Kipnis grounded out. 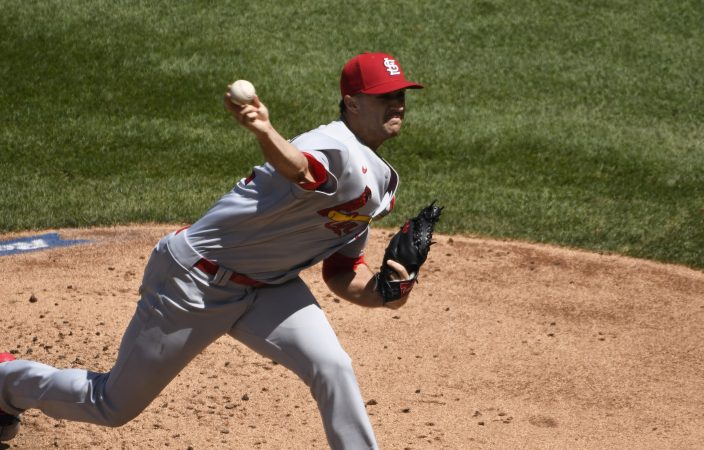 Tyler Webb (1-1) got four outs and the Cardinals got back to winning after dropping two straight to the NL Central leaders. Baseball's seven-inning doubleheader format, implemented this season to help teams push through a frequently disrupted 60-game schedule, allowed St. Louis to use four relievers for 1 1/3 innings apiece after Flaherty's exit. No team has been more disrupted than the Cardinals, who were sidelined for 15 days by a COVID-19 outbreak.

John Gant and Ricardo Sánchez finished the game for the Cardinals, with Sánchez allowing the Cubs' only other hit — Josh Phegley's two-run homer in the seventh.

The Cardinals will try to cap this unusual five-game, three-day series with a doubleheader sweep. The teams split two seven-inning games Monday. 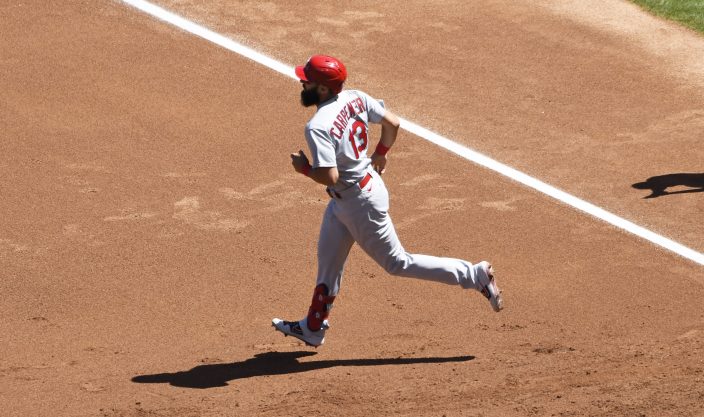 St. Louis Cardinals' Matt Carpenter (13) runs the bases after hitting a grand slam against the Chicago Cubs during the first inning in the first baseball game of a doubleheader, Wednesday, Aug. 19, 2020, in Chicago. (AP PhotoDavid Banks)

“Just one of those days where I didn't have the feel for much out there,” Mills said. “I wasn't able to throw many pitches for strikes today. Fastball command wasn't as good as it has been. Made the wrong pitch to Carpenter. He just hit it out of the yard. He did what he was supposed to, so not good.” 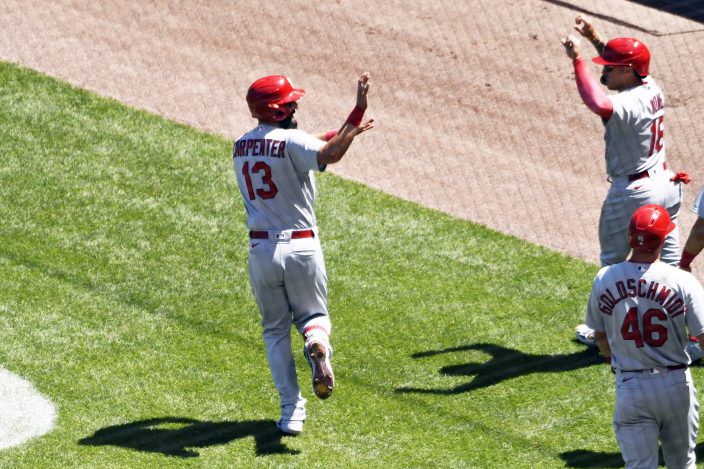 St. Louis Cardinals' Matt Carpenter (13) celebrates with teammates after hitting a grand slam against the Chicago Cubs during the first inning in the first baseball game of a doubleheader, Wednesday, Aug. 19, 2020, in Chicago. (AP PhotoDavid Banks)

Cardinals: Manger Mike Shildt expects C Yadier Molina to return soon, while INF Paul DeJong might need more time. Both players, along with INF Rangel Ravelo and RHP Kodi Whitley, have been working out after being cleared by Major League Baseball. All four were sidelined by COVID-19. Shildt said Molina was asymptomatic. ... LF Tyler O’Neill was in the lineup after being scratched Tuesday with a hand issue.

Cubs: 3B Kris Bryant missed his second consecutive game after getting an injection Tuesday for his ailing left wrist. The 2016 NL MVP was hurt on a diving attempt on César Hernández’s flare to left field in the fifth inning of a 7-2 victory at Cleveland last week. ... LHP José Quintana (thumb surgery) is scheduled to throw a simulated game on Friday. 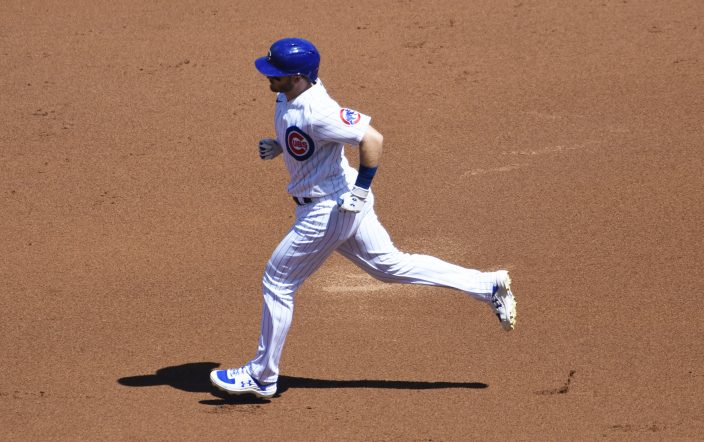 Chicago Cubs' Ian Happ (8) runs the bases after hitting a home run against the St. Louis Cardinals during the first inning of Game 1 of a baseball doubleheader, Wednesday, Aug. 19, 2020, in Chicago. (AP PhotoDavid Banks)

The Cardinals activated Gomber from the injured list and optioned RHP Ryan Meisinger to their alternate training site. Gomber was placed on the IL because of a potential concern in contact tracing, though he did not test positive for the coronavirus.

Cardinals: Shildt has “a high expectation” RHP Johan Oviedo will be called up to start Game 2 in his major league debut. Oviedo was a combined 12-8 with a 4.73 in 29 appearances (28 starts) at Class A and Double-A last season. 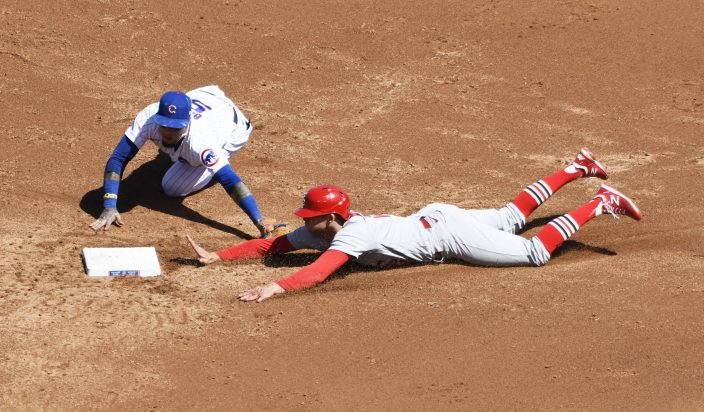 Cubs: The Cubs recalled RHP Adbert Alzolay from the club’s alternate site in South Bend, Indiana, to start Game 2. Alzolay was 1-1 with a 7.30 ERA in four appearances — two starts — with the Cubs last season.