Lourdes Gurriel Jr. chopped a single over a drawn-in infield in the seventh and final inning to drive in Teoscar Hernández, who earlier made a gutsy baserunning move, and lift the Toronto Blue Jays to a 3-2 win over the Philadelphia Phillies on Thursday in the first game of a doubleheader.

Hernández singled with one out and then went from first to third on a single to center by Vladimir Guerrero Jr. Hernández narrowly beat the throw from the outfield, as determined by video review. Gurriel followed with his single against Deolis Guerra (1-3).

Santiago Espinal had a sacrifice fly in the fourth inning and Craig Biggio tied the game with an RBI double in the sixth for Toronto (11-11), which has won four straight and had its second walk-off win in its temporary home. Billy McKinney went 2-for-3 and scored the tying run as the 29th player added to the roster for the game. 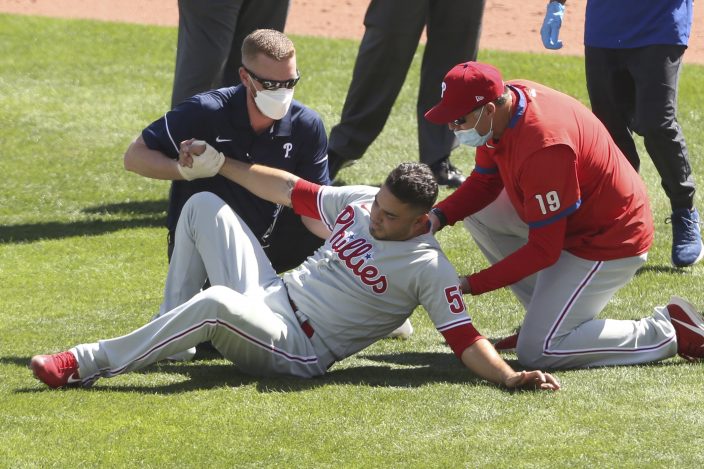 Philadelphia Phillies pitcher Jose Alvarez is helped after being hit by a ball hit by Toronto Blue Jays' Lourdes Gurriel Jr. during the fifth inning of the first game of a baseball doubleheader, Thursday, Aug. 20, 2020, in Buffalo, N.Y. (AP PhotoJeffrey T. Barnes)

Bryce Harper hit a first-inning homer and Andrew McCutchen added a third-inning RBI single for Philadephia, which has dropped two in a row after winning four straight.

Baseball Commissioner Rob Manfred was in attendance for the first time since Sahlen Field took its place as the Blue Jays home for the shortened season. He was seen before the game walking in front of the first-base dugout toward the foul-territory bullpens, but did not speak to reporters. 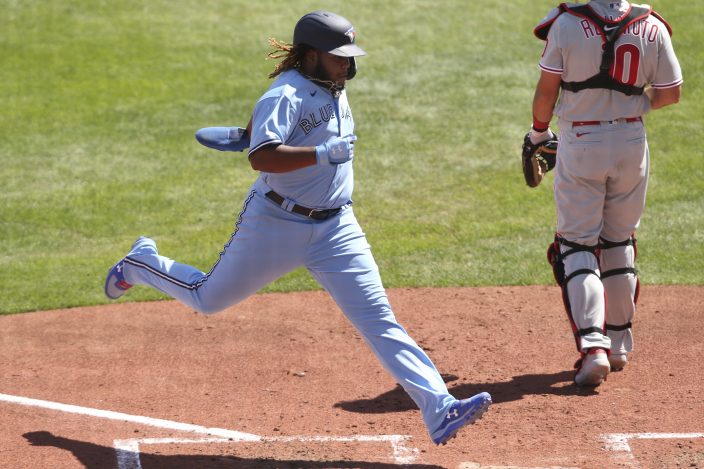 Toronto Blue Jays' Vladimir Guerrero Jr. scores on a ball hit by Santiago Espinal during the fourth inning of the first game of a baseball doubleheader against the Philadelphia Phillies, Thursday, Aug. 20, 2020, in Buffalo, N.Y. (AP PhotoJeffrey T. Barnes)

Phillies rookie Spencer Howard, who left his previous start last Friday with a blister on his pitching hand, made his third career start and allowed a run over 3 2/3 innings. In the fourth, he allowed singles to three of the first four batters and induced a sacrifice fly before being replaced by Blake Parker, who got Randal Grichuk to ground into an inning-ending forceout.

Toronto's Julian Merryweather struck out three batters over 1 1/3 relief innings in his major league debut. The 28-year-old, who missed the 2018 season after undergoing Tommy John surgery, was traded to Toronto in the deal for Josh Donaldson but was limited to two rehab starts in Class A in 2019.

Grichuk, who entered with homers in four straight games, went 0-for-4. 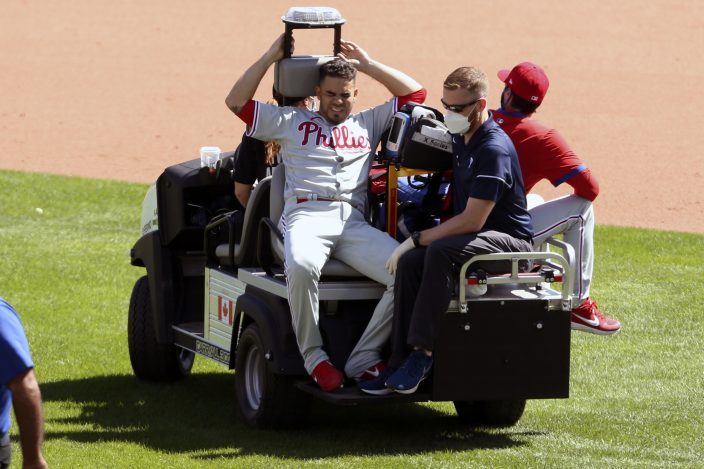 Philadelphia Phillies pitcher Jose Alvarez is helped off the field after being hit by a ball hit by Toronto Blue Jays' Lourdes Gurriel Jr. during the fifth inning of the first game of a baseball doubleheader, Thursday, Aug. 20, 2020, in Buffalo, N.Y. (AP PhotoJeffrey T. Barnes)

IT'S BEEN A WHILE

The Phillies played their first game in Buffalo in nearly 135 years. Philadelphia played the Buffalo Bisons, then in the National League, on Sept. 19, 1885 at Olympic Park. A few months earlier, on July 4, the Phillies swept the Bisons in the last doubleheader they played in the city. In the second game of that twinbill, catcher Jack Clements hit the last home run by a Phillies player in Buffalo before Harper's first-inning shot. Clements remains fifth on the Phillies' all-time list for homers by a catcher. 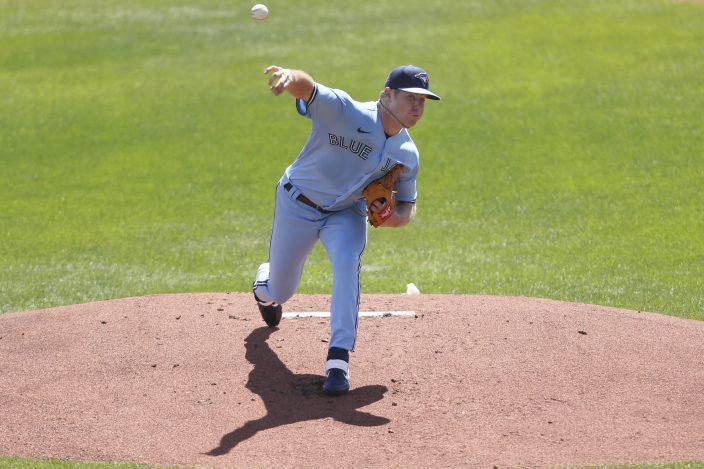 Phillies: LHP José Álvarez was removed from the field on a cart after taking a 105-mph line drive to the groin area. Gurriel was the only batter he faced, and Álvarez completed the out with a flip to first base to end the fifth inning. ... INF Jean Segura (hamstring) played for the first time since being injured Sunday against the Mets. … RF Jay Bruce was rested for a second straight game.

Blue Jays: 1B Rowdy Tellez (head), who was struck in the face by a passing runner in Tuesday’s game at Baltimore, was used as a pinch-hitter and grounded out. ... Toronto GM Ross Atkins said he was “extremely optimistic” that SS Bo Bichette, on the IL with a sprained knee, will “be a great piece of this team in 2020.” ... Atkins also said RHP Nate Pearson, placed on the IL on Wednesday, had an MRI Thursday. Atkins said the team was ”not initially overly concerned." 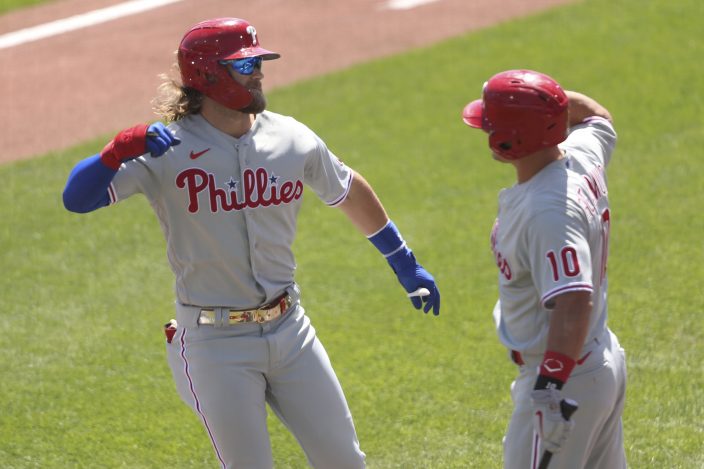 Phillies: RHP Vince Velasquez (0-0, 7.88 ERA) will make his first start since Aug. 9 in the second game of the doubleheader. He made a relief appearance on Aug. 13, working one inning against Baltimore.

Blue Jays: RHP Trent Thornton (0-0, 2.25 ERA) will be activated from the IL to start the nightcap. He's been sidelined with elbow inflammation since Aug. 6.