Five more migrants have died while trying to reach the southern Canary Islands from west Africa, bringing to 20 the number of who lost their lives this week attempting to navigate perilous migration routes to Europe, Spanish authorities said Friday.

Maritime rescuers and police patrols based in Spain picked up a total of 141 migrants in the Mediterranean Sea and Atlantic Ocean within 48 hours, the country's official maritime rescue service said.

The rescue operations included a wooden boat located some 110 miles south of the Canaries archipelago with 12 survivors on board and four bodies. Two of the survivors were evacuated by helicopter and one of them later died at the hospital, according to the Spanish government’s delegation in the islands. 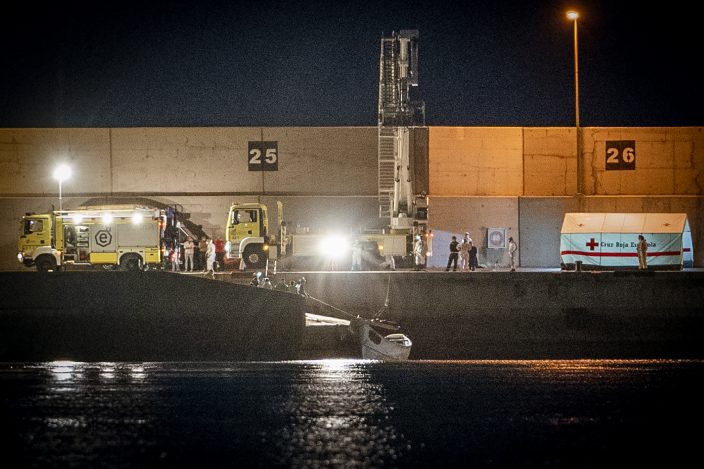 Emergency services use a crane to lift a dead body of a migrant from a wooden boat rescued by the Spanish Maritime Rescue Service, at the Arinaga port in Gran Canaria island, Spain, Friday, Aug. 21, 2020. The bodies of 15 migrants who were found earlier this week in a boat were transported Thursday to the Gran Canaria island. The shipwreck had been spotted Wednesday by a plane as it searched for a missing boat that had left Mauritania on August 15 with around 40 people. (AP PhotoEmilio Morenatti)

The bodies of 15 other migrants who were found dead in another boat earlier in the week, some floating in sea water their vessel had taken on, were transported Thursday to Grand Canary Island.

A plane spotted the boat as it searched for a missing boat that had left Mauritania on August 15 with around 40 people. It remains unclear if the boat that was located is the one reported missing.

The route from western Africa to the Spanish islands in the Atlantic Ocean is notoriously dangerous, but in recent times it has increasingly attracted migrants wanting to reach European shores as authorities have cracked down on migrant boats setting out on Mediterranean routes .

Without counting the latest new fatalities reported on Thursday and Friday, at least 190 migrants have died since the beginning of the year trying to reach the Canary Islands, according to the U.N. migration agency’s Missing Migrants project.

More than 3,500 migrants have arrived on the archipelago so far in 2020, five times the figure seen in 2019, according to the tally kept by Spain’s Interior Ministry. The route to Spain across the Mediterranean, meanwhile, has seen a drop of about 30% in arrivals compared to the previous year, with some 10,000 arrivals so far.