Marcus Semien staked Mike Fiers to an early lead, Stephen Piscotty drove in all three of his runs with two outs, and the AL-best Oakland Athletics beat the Los Angeles Angels 5-3 on Friday night to run their home winning streak to nine games. 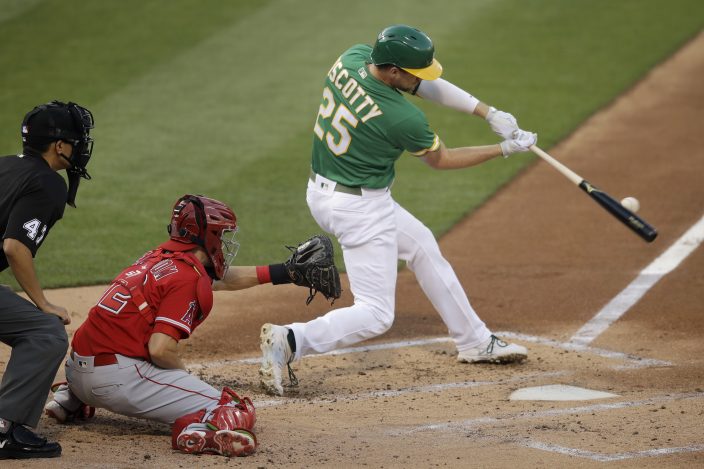 Semien notched his third career leadoff home run and second this season as Oakland jumped on Andrew Heaney from the start, also getting Stephen Piscotty's two-run double in the first. Matt Olson added an RBI double in the fifth to chase Heaney (1-2) before Piscotty's run-scoring single.

Angels star Mike Trout hit a broken-bat, two-run single in the sixth that glanced off first baseman Matt Olson's glove and then got past a lunging Chad Pinder.

Joakim Soria threw a 76 mph slider to retire Trout on a called third strike to end an eight-pitch at-bat and the eighth inning. Liam Hendriks finished for his ninth save. 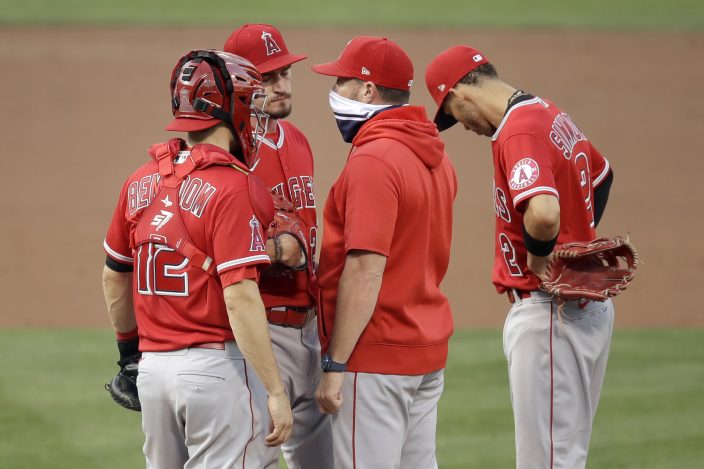 Angels slugger Albert Pujols went 1 for 5 with a double and remained stuck at 659 home runs, one from tying Hall of Famer Willie Mays for fifth all-time.

Anthony Rendon had three more hits for an 11-game hitting streak for the Angels.

Heaney, who took a no-decision against the A’s on opening day, hasn’t beat Oakland since 2017. 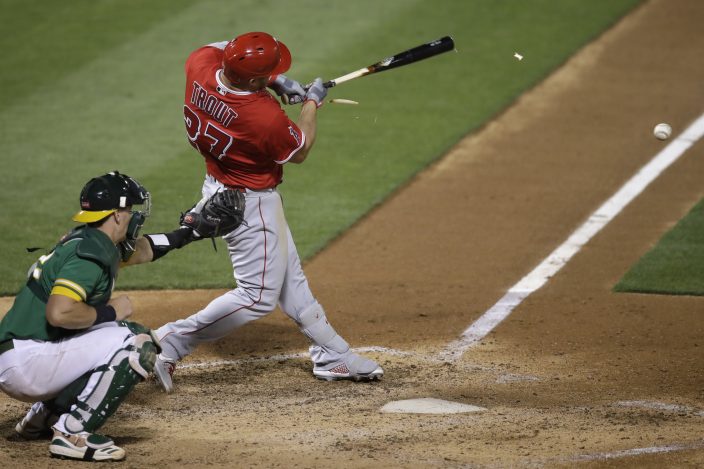 Los Angeles lost its fourth straight and eighth in nine.

The Angels welcomed back Andrelton Simmons from a sprained left ankle nearly a month after he got hurt running out an infield single July 27 at Oakland. 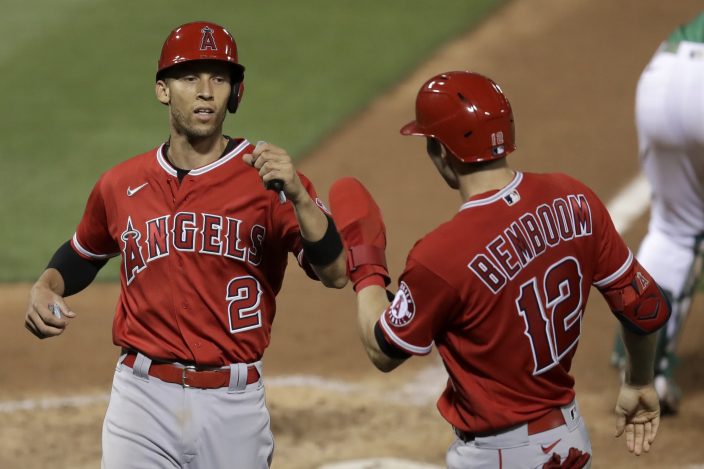 Los Angeles Angels' Andrelton Simmons (2) celebrates with Anthony Bemboom, right, after both scored on a single by Mike Trout in the sixth inning of a baseball game against the Oakland Athletics Friday, Aug. 21, 2020, in Oakland, Calif. (AP PhotoBen Margot)

Simmons singled to start the third only to have the A's defense turn a double play on David Fletcher's ensuing grounder.

Manager Bob Melvin said first base coach Mike Aldrete was away from the club for another day as his home near Monterey remains safe for now but is threatened by a nearby wildfire. 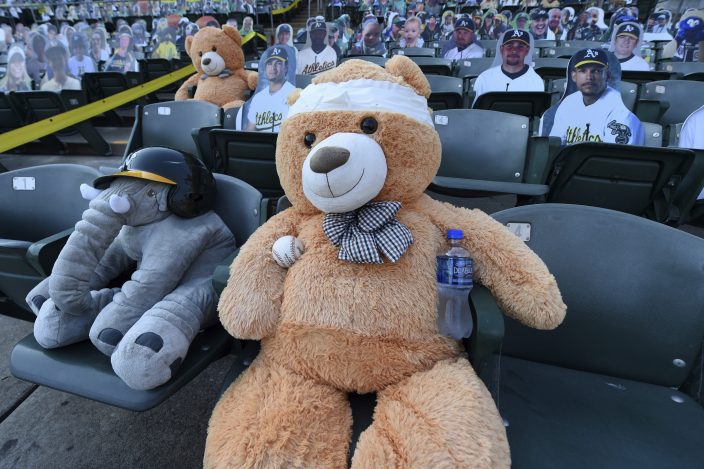 T. Bear holds a ball while sitting in his seat before the Oakland Athletics against the Los Angeles Angels game at the Coliseum in Oakland, Calif., Friday, Aug. 21, 2020. T. Bear was hit by a foul ball Thursday by Arizona Diamondbacks' Ketel Marte in the eighth inning. (Jose Carlos FajardoBay Area News Group via AP)

“He's close enough to where we all have our fingers crossed for him,” Melvin said. “This whole thing is so sad. It puts things into perspective when you're out on a baseball field playing baseball.”

The A's medical staff is monitoring the air quality with haze and smoke surrounding the ballpark. 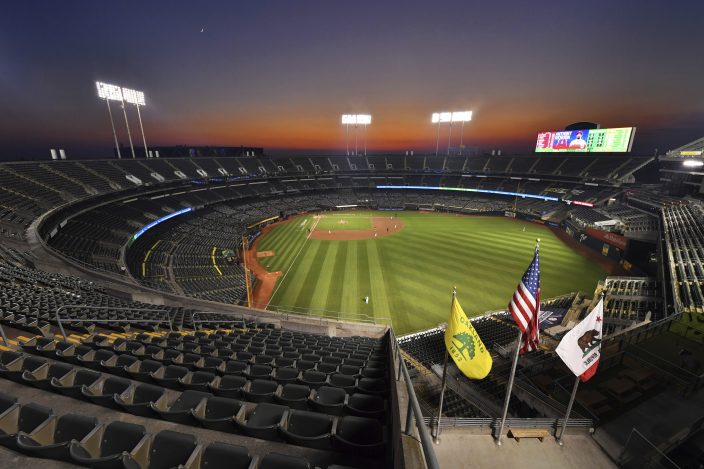 The Oakland Athletics play against the Los Angeles Angels in the fourth inning of a baseball game at the Coliseum in Oakland, Calif., Friday, Aug. 21, 2020. (Jose Carlos FajardoBay Area News Group via AP)

Angels: C Max Stassi was out a day after leaving in the second inning at San Francisco when hit in the right knee by a foul ball. X-rays were negative. He suffered a bruise and a strain. "I would say it's going to be at least two, three weeks at the minimum," manager Joe Maddon said. The Angels were already short-handed at catcher after Jason Castro exited Wednesday’s game following a five-game absence because of neck stiffness. Anthony Bemboom started behind the plate. ... DH Shohei Ohtani got a break to work on his swing and will play again Saturday. “It'll be very important for us to get him right,” Maddon said.

Athletics: LHP A.J. Puk was scheduled to throw another bullpen at the team's San Jose alternate site, then is likely to take two days off before throwing to hitters. Melvin figures he will need to face live hitting a few times before returning to the A's as a potential long reliever to fill a void after the A's lost Burch Smith last weekend to a strained forearm. “If we can get him up to three innings that would take care of that, even multiple innings. Our starters are going a little bit longer now,” Melvin said of Puk. “In theory you don't need four, five, six, something like that, so even two innings would be considered probably that role and my guess is we'll get him up to at least two innings before he's here.”

T. Bear, a giant stuffed orange bear in the left-field seats, was OK and smiling with his head wrapped in tape a day after taking a foul ball from the bat of Arizona's Ketel Marte. The bear, unavailable for interviews for 48 hours after a concussion per the team, cradled the souvenir ball.