Both teams scored a run in the fifth and it stayed 1-all until each team began the 10th with an automatic runner on second base.

After Anthony Banda (1-0) got Travis Shaw to ground into an inning-ending double play in the top half, the Rays won it. 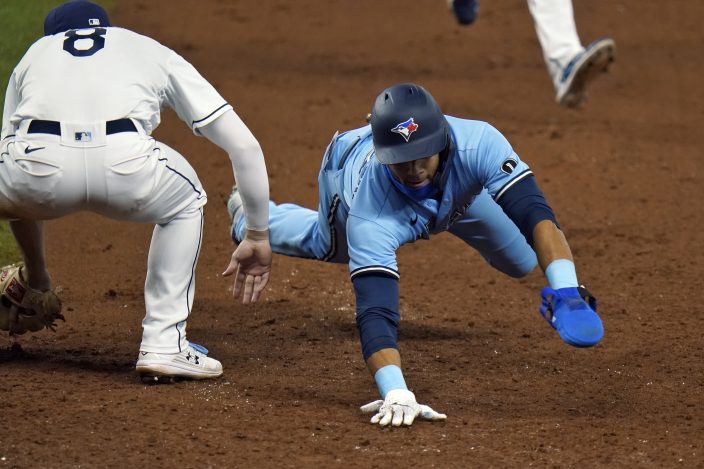 Toronto Blue Jays' Lourdes Gurriel Jr. dives back safely ahead of the tag by Tampa Bay Rays' Brandon Lowe (8) on a pickoff attempt during the ninth inning of a baseball game Saturday, Aug. 22, 2020, in St. Petersburg, Fla. (AP PhotoChris O'Meara)

A groundout and walk put runners at the corners. Kiermaier batted for Michael Brosseau and singled off Anthony Bass (1-1).

The Blue Jays were bidding for their first seven-game winning streak since 2016. Toronto had won the series opener Friday night 6-5 in 10 innings.

Toronto lefty Hyun Jin Ryu allowed one run, three hits and struck out six in five innings. He has given up three runs and 10 hits over 22 innings in his last four starts. 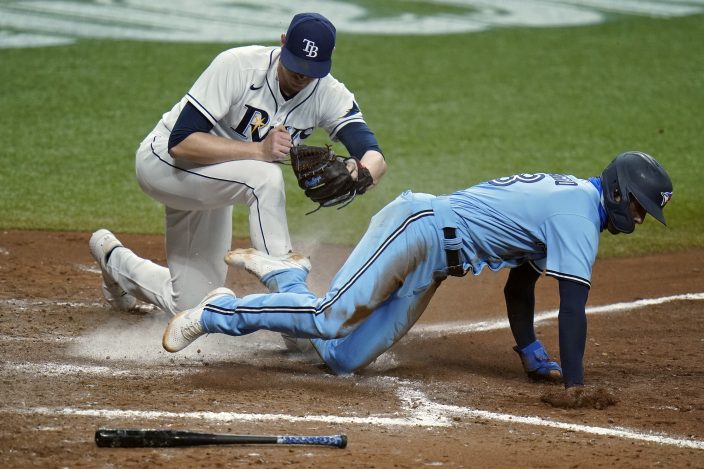 Toronto Blue Jays' Cavan Biggio (8) gets tagged out by Tampa Bay Rays relief pitcher Peter Fairbanks after trying to score from second base on a wild pitch by Fairbanks during the seventh inning of a baseball game Saturday, Aug. 22, 2020, in St. Petersburg, Fla. (AP PhotoChris O'Meara)

Rays starter Aaron Slegers struck out five over four no-hit innings in his first start since July 10, 2018 while with Minnesota. He allowed one baserunner, Lourdes Gurriel Jr., who reached on an error.

Slegers was the 10th different starting pitcher used by Tampa Bay this season. The Rays have seven pitchers, including starters Charlie Morton and Yonny Chirinos, on the injured list.

Sean Gilmartin replaced Slegers in the fifth and walked two before allowing the Blue Jays' first hit , a one-out single by Joe Panik that loaded the bases. Cavan Biggio put Toronto up 1-0 by drawing a walk on a 3-2 pitch with two outs.

Gilmartin brought back from the alternate training site for a second stint with the team this season.

Tampa Bay tied it at 1 later in the fifth on Manuel Margot's RBI grounder.

Biggio tried to score from second on a wild pitch in the seventh but was thrown out at the plate. He had singled and swiped second, making him 18 for 18 in career stolen base attempts.

Rays RHP Charlie Morton (right shoulder inflammation) is not surprised by the rash of injuries in baseball. “I think a lot of people predicted this,” Morton said. “It’s frustrating but I think we were aware of the risks coming into this year.”

Blue Jays: There was no update on SS Bo Bichette (knee) and RHP Nate Pearson (elbow).

Rays: 3B Yandy Diaz (dizziness) was scratched after his own batted ball hit him in the head during batting practice. ... RHP Chaz Roe (right elbow) went on the 10-day IL.