Kiké Hernández hit a three-run drive and Mookie Betts went deep twice in the Dodgers' seven-homer attack, powering Los Angeles past the Colorado Rockies 11-3 on Sunday for a three-game sweep.

The Dodgers are the only team in the majors yet to lose a series, unbeaten in 11. They have won 11 of 12 games overall and own the best record in baseball at 22-8 at the halfway point of this abbreviated season.

Wearing sunglasses at the plate, Hernández's three-run shot with two outs in the fourth inning lifted the Dodgers to a 5-2 lead. Joc Pederson singled and Max Muncy reached on an infield single to set up the Dodgers' third homer of the game. 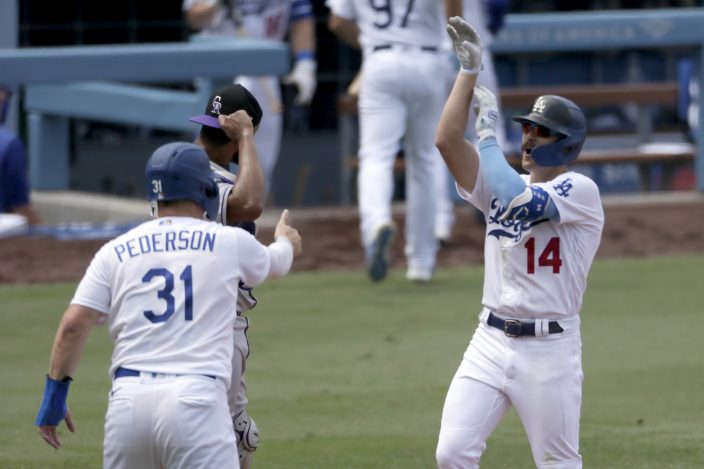 Cody Bellinger, the reigning NL MVP, hit a leadoff drive in the sixth and Will Smith led off the seventh with a homer, extending the Dodgers' lead to 7-2. Muncy went deep leading off the eighth. Betts added a two-run shot to right with two outs for his 11th homer of the season.

The last time the Dodgers belted seven homers was Sept. 2, 2019, at home against the Rockies.

Victor Gonzalez (1-0) earned his first major league victory, allowing one hit and striking out two in two innings of relief. 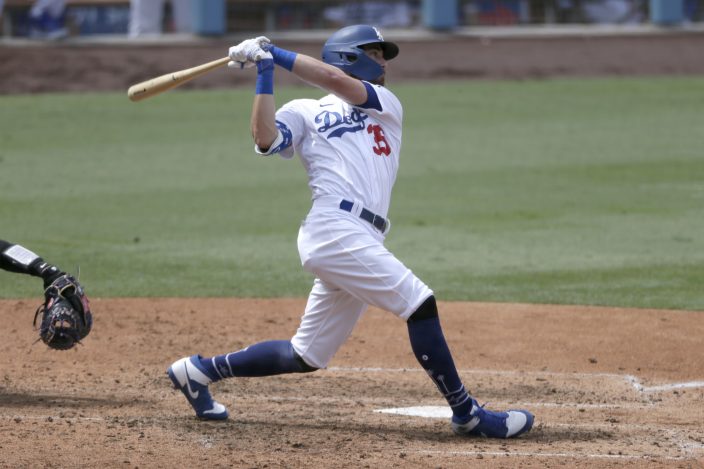 Los Angeles Dodgers' Cody Bellinger follows through on a solo home run against the Colorado Rockies during the sixth inning of a baseball game in Los Angeles, Sunday, Aug. 23, 2020. (AP PhotoAlex Gallardo)

Pinch hitter AJ Pollock hit a bases-loaded sacrifice fly for Los Angeles in the seventh for the game's only run that didn't score via homer.

The Dodgers took the lead on Corey Seager's solo shot in the first. The Rockies tied it on Trevor Story's two-out homer in the third.

Betts put the Dodgers ahead 2-1 with a two-out blast to center in the third. The Rockies tied it again on Ryan McMahon's homer leading off the fourth on Ross Stripling's first pitch of the inning. 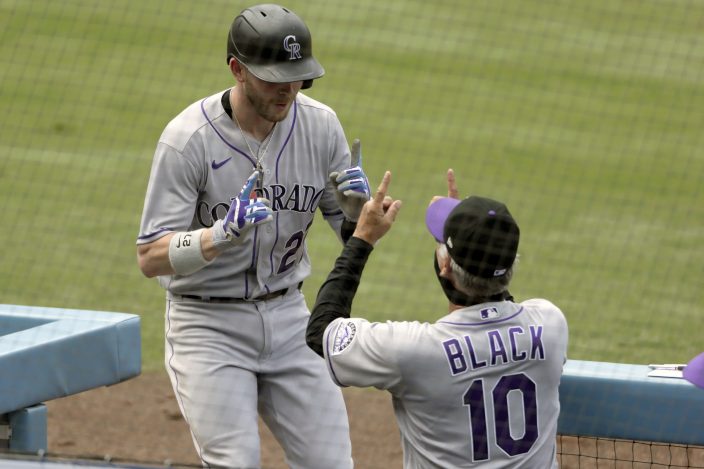 The only Dodger without a hit was Chris Taylor. He walked twice.

Sam Hilliard hit a solo homer in the ninth for Colorado.

Antonio Senzatela (3-1) gave up the first four Dodgers’ homers after allowing just four in his first 31 innings of the season. The right-hander allowed six runs and seven hits in 5 1/3 innings. 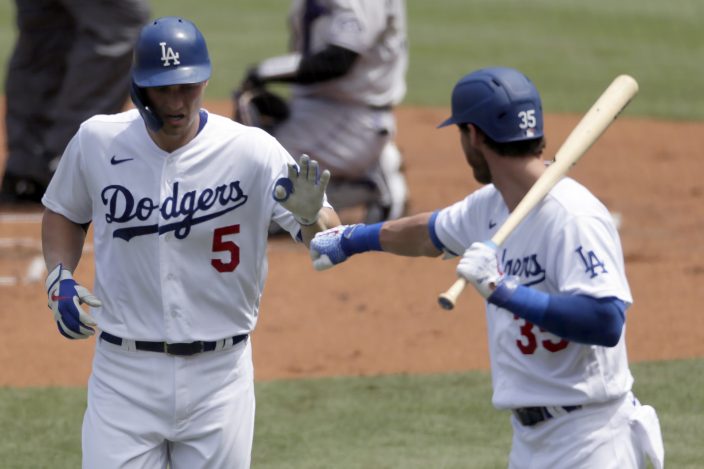 The Rockies continued to sputter. They have lost a season-high seven straight in the midst of playing 20 consecutive games. Colorado has dropped 10 of 11 overall after starting the season with an 11-3 mark.

Dodgers: 3B Justin Turner had the day off after getting hit by a pitch on Saturday. He'll also have Monday's scheduled off day to recuperate from swelling and bruising in his left leg. 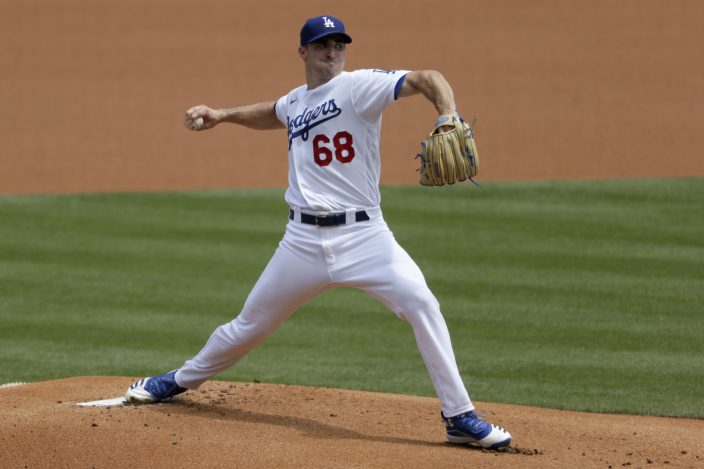 Slumping Colorado slugger Nolan Arenado got the day off. He's batting .119 on the road, where he's 5 for 42 with no extra-base hits. His 15-game streak without an extra-base hit away from home is the longest of his career.

“His timing is off, he’s a little jumpy in the box,” Rockies manager Bud Black said. 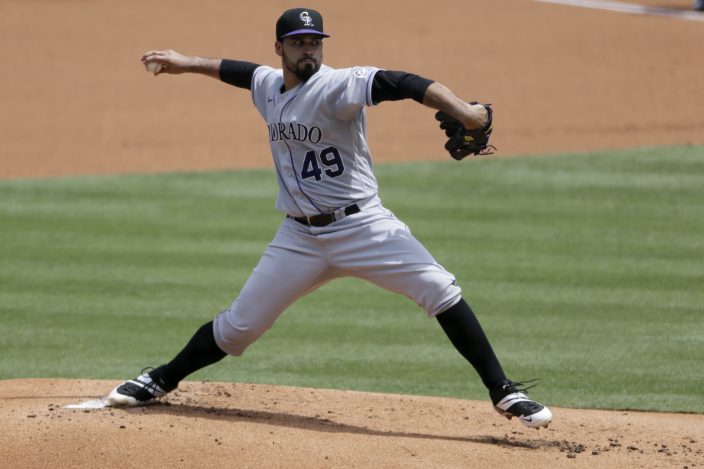 The Dodgers honored Kobe Bryant on what would have been his 42nd birthday. Bryant and daughter Gianna were killed, along with seven others, in a helicopter crash in January.

The team displayed photos showing Bryant at the stadium over the years on the videoboard before the game, including one with Bryant and Sandy Koufax. The Dodgers came on the field wearing either Bryant's No. 8 or 24 jerseys. They, along with the Rockies, lined up for a video recounting Bryant's life narrated by Vin Scully. Bryant was shown giving the traditional call of “It's time for Dodger baseball!” at Game 4 of the 2018 World Series. 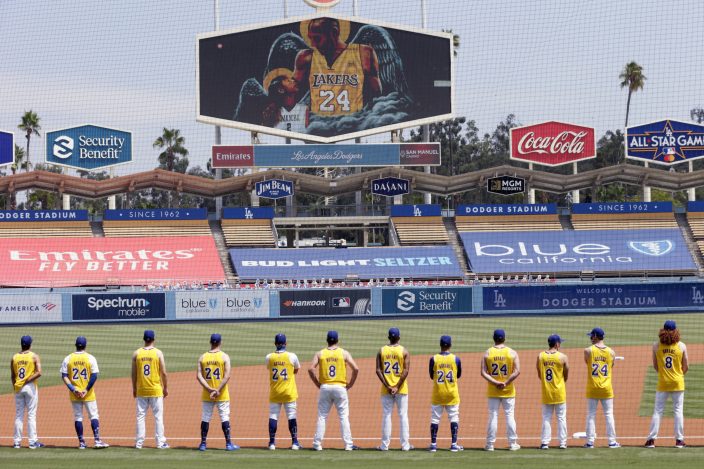 The Los Angeles Dodgers players honor the memories of Kobe and Gianna Bryant during pregame ceremonies before a baseball game against the Colorado Rockies in Los Angeles, Sunday, Aug. 23, 2020. (AP PhotoAlex Gallardo)

Rockies: RHP Ryan Castellani (0-1, 3.77 ERA) starts the series opener against Arizona on Monday in Phoenix, where he attended high school. He's coming off a 13-6 loss to Houston.

Dodgers: LHP Julio Urías (2-0, 2.74 ERA) starts Tuesday at San Francisco. He's started twice this season against the Giants, but didn't factor in the decision either time. He is 0-2 against them in eight career starts.