Justin Smoak homered and drove in three runs as the Milwaukee Brewers cooled off Trevor Bauer and snapped a four-game skid with a 4-2 victory over the Cincinnati Reds on Monday night.

Omar Narvaez added a solo shot to help the Brewers win their opener of a 10-game homestand.

Bauer (3-1) began the game with an 0.68 ERA that led the majors, but fell behind 4-0 in the first four innings as the Brewers reversed their season-long trend of slow starts. 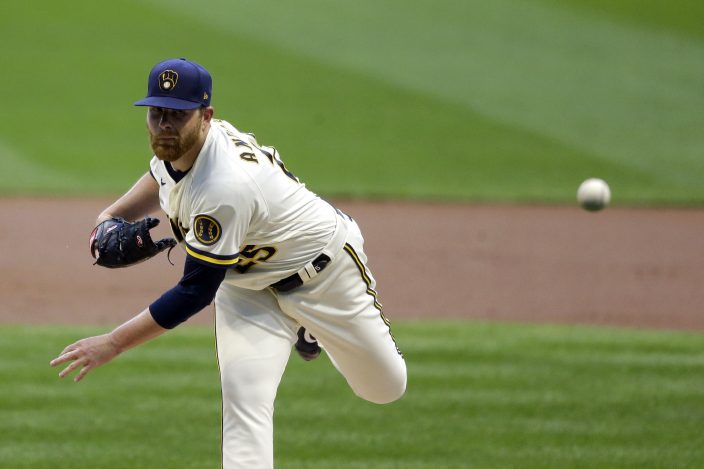 He ended up striking out seven and allowing seven hits, four runs and two walks in 6 1/3 innings. Through his first four starts, Bauer ha d given up a total of two runs over 26 1/3 innings.

Before Monday, the Brewers had been outscored 37-5 in the opening two innings of games this season. Smoak gave Milwaukee a first-inning lead this time as he hit a 3-2 pitch up the middle for a two-out single that brought home Christian Yelich, who had doubled.

Bauer ran into trouble again with two outs in the third when he hit Keston Hiura with a pitch. Smoak again delivered on a full-count pitch, hitting a drive into the right-field seats. The Brewers made it 4-0 when Narvaez delivered his leadoff drive in the fourth. 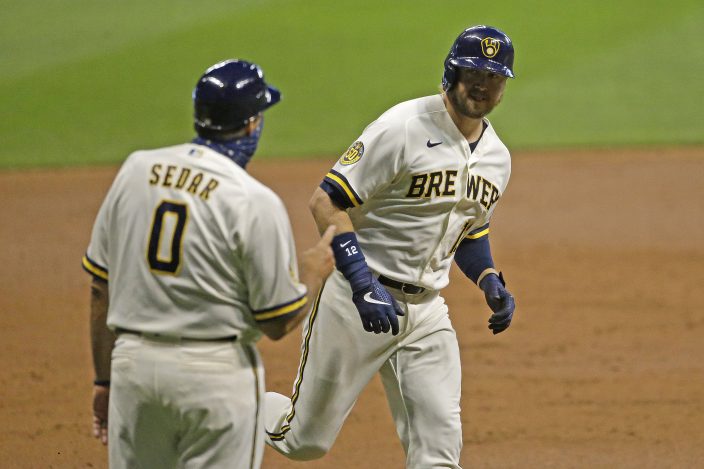 Milwaukee Brewers' Justin Smoak, right, is congratulated by third base coach Ed Sedar after hitting a two-run home run during the third inning of a baseball game against the Cincinnati Reds, Monday, Aug. 24, 2020, in Milwaukee. (AP PhotoAaron Gash)

Brewers starter Brett Anderson (2-2) held the Reds scoreless for the first five innings before allowing leadoff homers to Curt Casali in the sixth and Eugenio Suarez in the seventh. Anderson, who left after the Suarez shot, allowed five hits and one walk with three strikeouts.

Devin Williams, David Phelps and Josh Hader held the Reds hitless the rest of the way. Hader gave up a leadoff walk to Joey Votto in the ninth but retired the next three batters to earn his sixth save.

Hader has worked 8 1/3 innings this season and still hasn't allowed a hit. 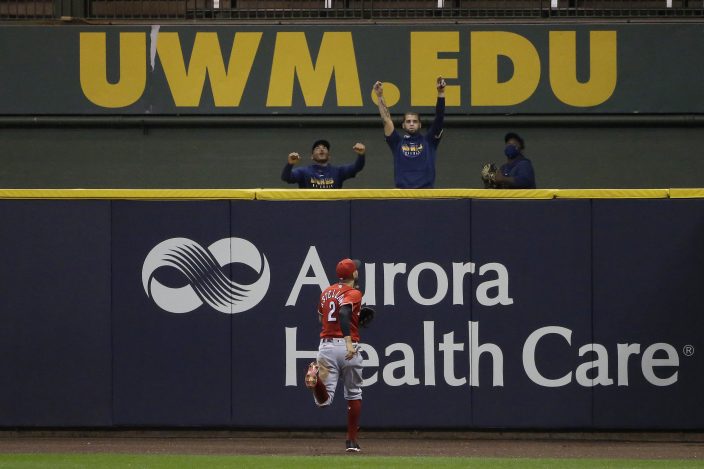 This four-game series matches two NL Central rivals trying to bounce back from disappointing starts as the abbreviated season approaches its halfway point. They entered Monday’s game with identical 11-15 records, putting them 5 ½ games behind the division-leading Chicago Cubs.

Cincinnati’s had great starting pitching but entered Monday with an MLB-low .207 team batting average. Milwaukee wasn’t much better at .214, ahead of only three MLB teams. 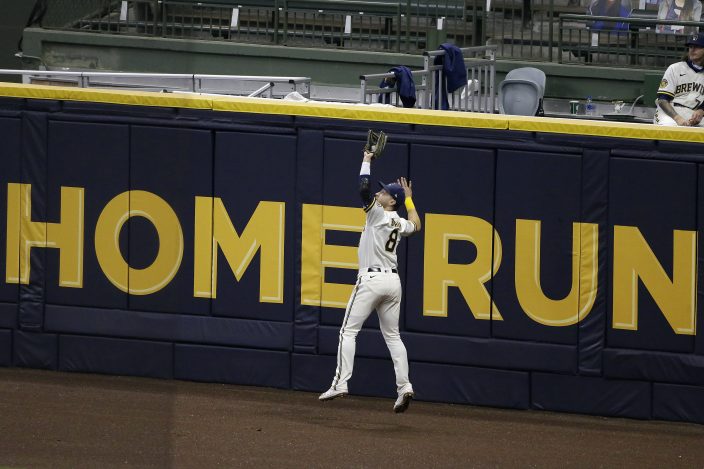 Milwaukee Brewers' Ryan Braun makes a leaping catch at the wall during the sixth inning of a baseball game against the Cincinnati Reds Monday, Aug. 24, 2020, in Milwaukee. (AP PhotoAaron Gash)

Stephenson had been dealing with a back strain. Reed was 0-1 with a 5.79 ERA in nine games, though he hadn’t allowed a run in his last five appearances. 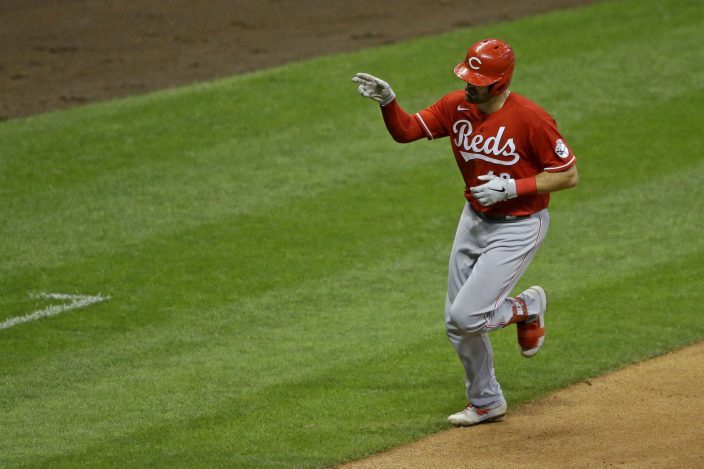 Cincinnati Reds' Curt Casali reacts after hitting a solo home run during the sixth inning of a baseball game against the Milwaukee Brewers Monday, Aug. 24, 2020, in Milwaukee. (AP PhotoAaron Gash)

Brewers manager Craig Counsell wore a “Black Lives Matter” T-shirt to his pregame media availability and opened the session by discussing the police shooting of a Black man that sparked protests in the Milwaukee suburb of Kenosha.

A video that went viral Sunday showed 29-year-old Jacob Blake getting shot, apparently in the back, as he leaned into his SUV while his three children sat inside the vehicle. Blake was hospitalized and in serious condition Monday.

“A Black man was shot and his life is in peril, and it frankly shouldn’t be,” Counsell said. “We’ve got a systemic problem that we need to address, and we all need to educate ourselves. Whether you agree or disagree with what I’m saying, I think it’s important that we continue to think, we continue to pursue policy change, we continue to act, because there’s violence happening that just absolutely should not be happening. We can’t stay quiet about it.” 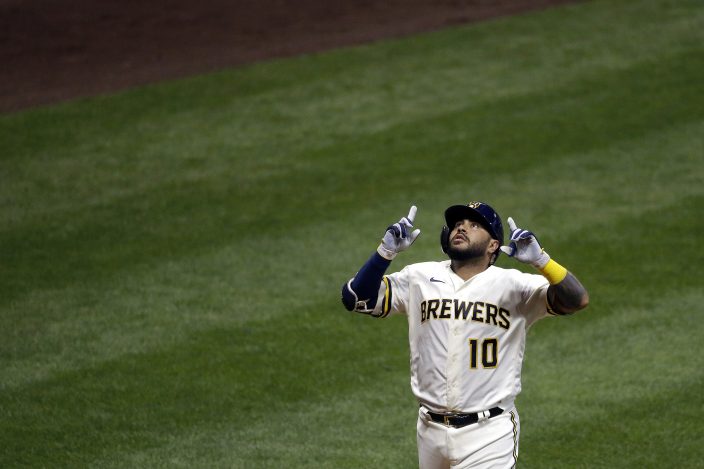 Milwaukee Brewers' Omar Narvaez reacts after hitting a solo home run during the fourth inning of a baseball game against the Cincinnati Reds, Monday, Aug. 24, 2020, in Milwaukee. (AP PhotoAaron Gash)