Colorado leadoff hitter Raimel Tapia had three hits and knocked in the go-ahead run with his single in the fifth. He also made a crucial catch against the outfield wall on Kole Calhoun's long fly ball that ended the seventh and likely saved two runs.

The Diamondbacks have lost six straight games and are in last place in the NL West. 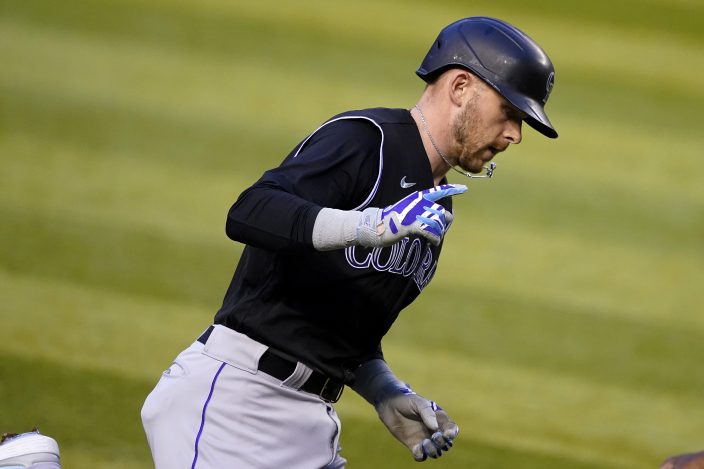 Colorado Rockies' Trevor Story rounds the bases after hitting a solo home run during the first inning of a baseball game against the Arizona Diamondbacks Monday, Aug. 24, 2020, in Phoenix. (AP PhotoMatt York)

Story crushed a solo homer in the first inning that landed well beyond the left-center field wall and gave the Rockies a 1-0 lead.

The 24-year-old Castellani (1-1), who went to high school in Phoenix, gave up three hits over six innings, including two solo homers. He retired seven of the last eight batters he faced and bounced back from a rough outing on Wednesday, when he gave up five runs in a loss against Houston.

Daniel Bard continued his impressive comeback story by pitching a scoreless ninth for his second save. The 35-year-old is back in the big leagues for the first time since 2013 and was a mental skills coach for the Diamondbacks coach the past two seasons. 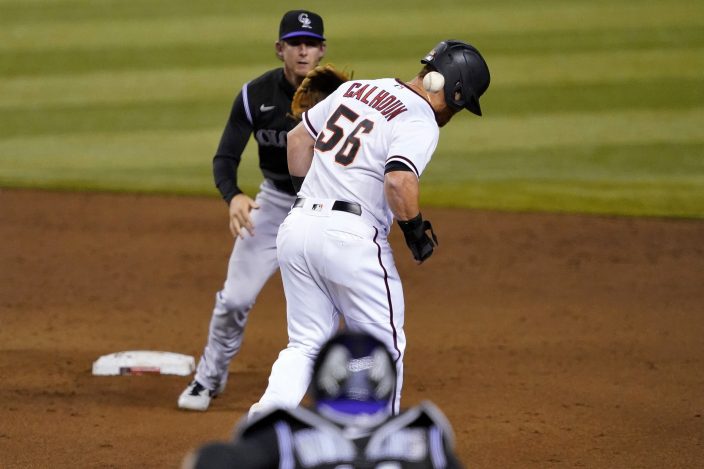 Arizona Diamondbacks' Kole Calhoun (56) is hit in the head by Colorado Rockies catcher Tony Wolters after getting caught in a run down as Rockies' Ryan McMahon looks on during the fifth inning of a baseball game, Monday, Aug. 24, 2020, in Phoenix. Calhoun was ruled out on the play. (AP PhotoMatt York)

Arizona right-hander Taylor Clarke made his first start of the year after Merrill Kelly was scratched before the game with a right shoulder nerve impingement. The 27-year-old gave up two runs, but just one earned, over four innings.

The Diamondbacks got solo homers from Kole Calhoun and Christian Walker. Walker's homer down the left-field line came on a hanging breaking ball and tied the game at 2-all in the fourth.

Taylor Widener (0-1) took the loss, giving up one run over two innings of relief. 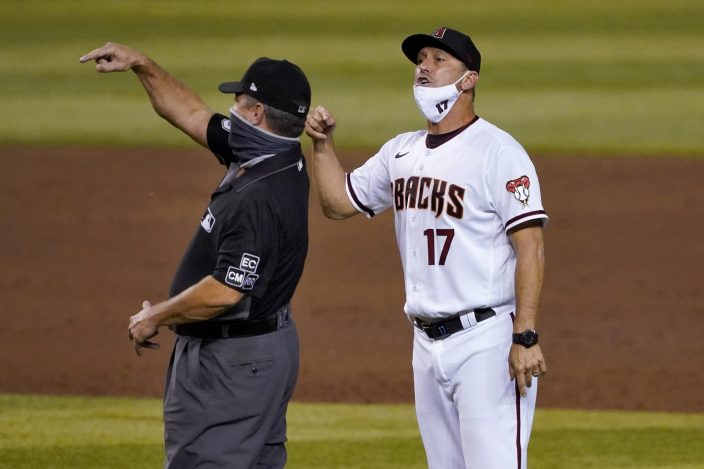 Arizona Diamondbacks manager Torey Lovullo is ejected from the game by umpire Rob Drake during the sixth inning of a baseball game against the Colorado Rockies, Monday, Aug. 24, 2020, in Phoenix. (AP PhotoMatt York)

OFF THE HELMET AND OUT

A strange play happened in the fifth inning when Ketel Marte popped out to shallow left field for the D-backs' second out. Tapia tried to double Kole Calhoun off first base but the ball skipped past Daniel Murphy.

Calhoun tried to advance to second base but catcher Tony Wolters was backing up the play. He fired the ball to second and it ricocheted off Calhoun's helmet. Umpires ruled that Calhoun — who appeared to lean into the throw — interfered for the third out. 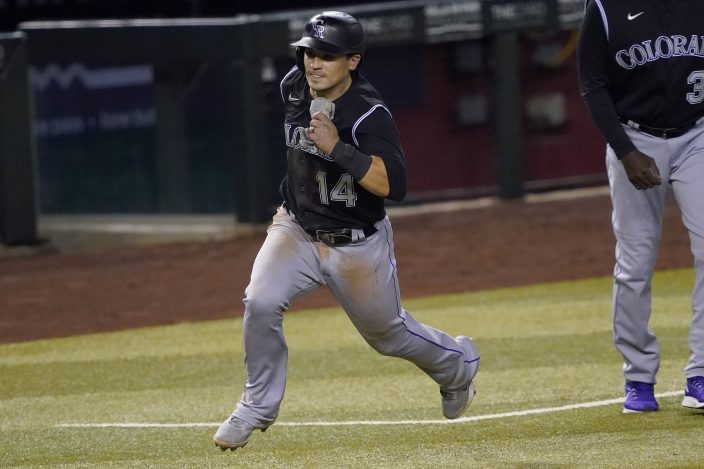 Colorado Rockies' Tony Wolters (14) scores on a base hit by Raimel Tapia during the fifth inning of a baseball game against the Arizona Diamondbacks, Monday, Aug. 24, 2020, in Phoenix. (AP PhotoMatt York)

Manager Torey Lovullo came out to argue and was quickly ejected. It was his second ejection this year and sixth of his D-backs' career.

Rockies: Catcher Tony Wolters took a foul tip off his left leg in the ninth inning and had to leave the game. Drew Butera finished the game in his place. 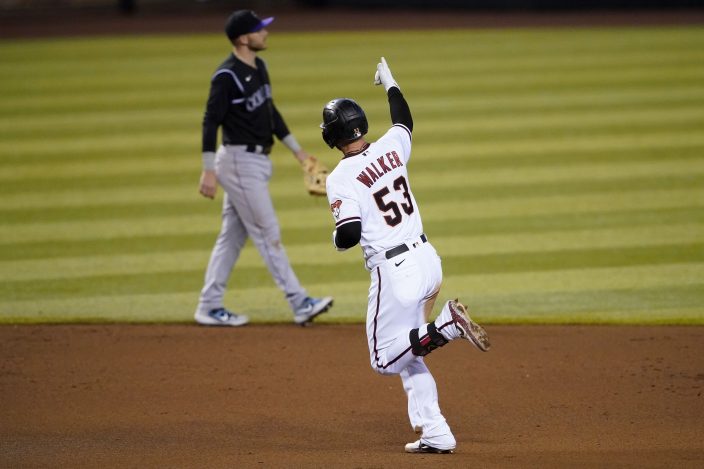 Diamondbacks: The announcement that Kelly wouldn't start Monday's game came about 30 minutes before first pitch. Kelly has been among the D-backs' most consistent pitchers this season with a 3-2 record and 2.59. Arizona announced the 31-year-old would go on the 10-day injuried list. Riley Smith was called up from the team's alternate site. His first appearance with the D-backs will be his big league debut. 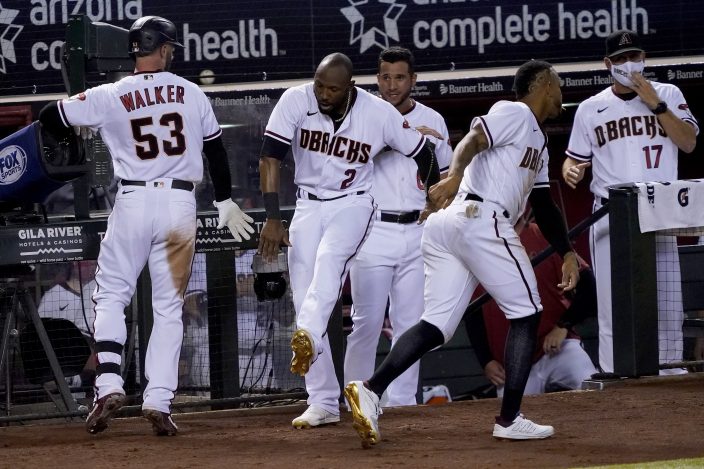 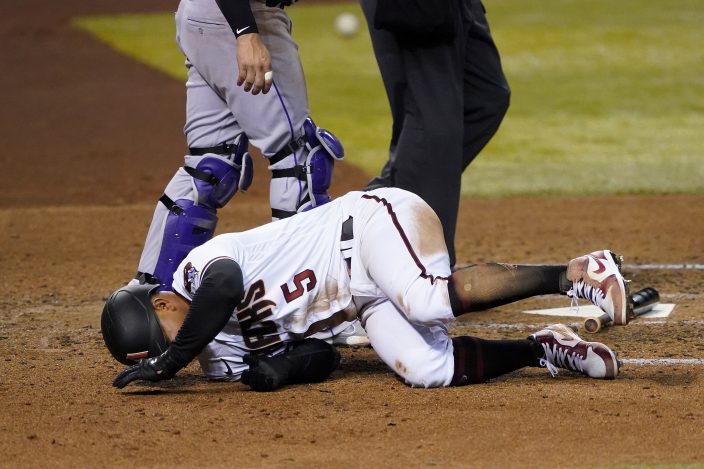 Arizona Diamondbacks' Eduardo Escobar (5) falls after being hit by a pitch during the fourth inning of a baseball game against the Colorado Rockies, Monday, Aug. 24, 2020, in Phoenix. (AP PhotoMatt York) 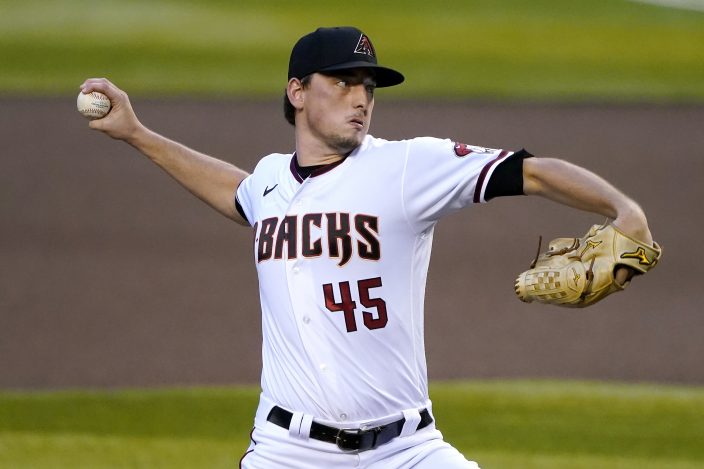