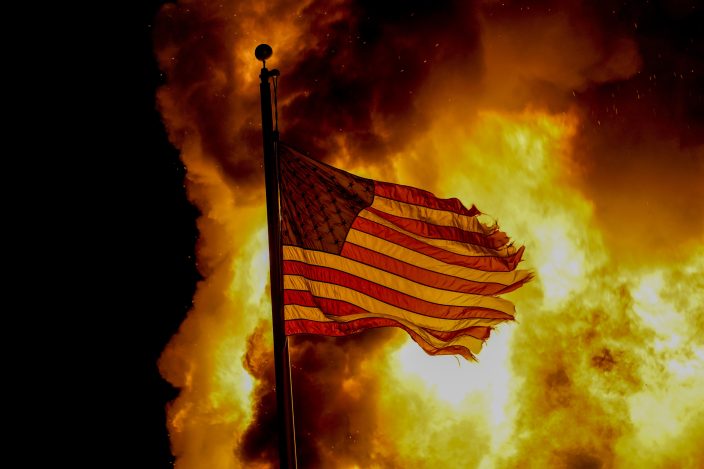 A flag flies over a department of corrections building ablaze during protests, late Monday, Aug. 24, 2020, in Kenosha, Wis., sparked by the shooting of Jacob Blake by a Kenosha Police officer a day earlier. (AP PhotoMorry Gash)

ELECTION 2020-RNC — Two of the Republican Party’s rising stars, both people of color, offer an optimistic view of President Donald Trump’s leadership, closing the opening night of the GOP’s scaled-back convention with a positive message at odds with the dark warnings that dominated much of the night. By Steve Peoples, Michelle L. Price and Zeke Miller. SENT: 1,110 words, photos, video. With ELECTION 2020-RNC-TAKEAWAYS — All Trump, all the time; ELECTION 2020-RNC-FACT CHECK — Trump makes a dizzying array of false claims about voting fraud and health care.

ELECTION 2020-RNC-TRUMP-POLITICS AND GOVERNING — Plenty of presidents have walked right up to the line separating official business from politics — or even stepped over it. Trump has blown past it with a bulldozer, and his planned Republican convention speech from the White House lawn this week might be the latest and most blatant example yet. By Aamer Madhani, Darlene Superville and Zeke Miller. SENT: 1,310 words, photos. 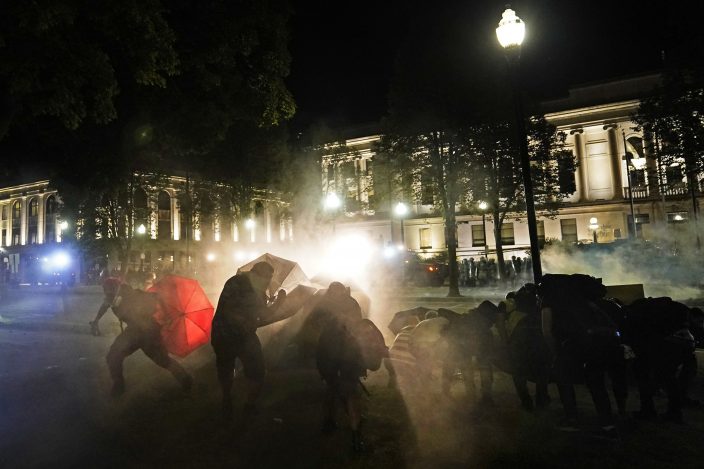 Protesters take cover from tear gas fired by police outside the Kenosha County Courthouse, late Monday, Aug. 24, 2020, in Kenosha, Wis. Protesters converged on the county courthouse during a second night of clashes after the police shooting of Jacob Blake a day earlier turned Kenosha into the nation's latest flashpoint city in a summer of racial unrest. (AP PhotoDavid Goldman)

Find more coverage of the conventions and Election 2020 on the 2020 U.S. Elections featured topic page in AP Newsroom.

RACIAL INJUSTICE-BODY CAMERAS — Officials in Kenosha, Wisconsin, have put off implementing body cameras for police officers, even though leaders unanimously endorsed them more than three years ago as a way to increase police accountability and collect evidence at scenes of domestic violence. By Ryan J. Foley. SENT: 1,120 words, photos. With POLICE-SHOOTING-WISCONSIN — Kenosha protesters, police clash again after Black man shot.

VIRUS-OUTBREAK-SCOTLAND-INDEPENDENCE — There is wide agreement that Britain’s devastating coronavirus outbreak has been met by strong, effective political leadership. Just not from Prime Minister Boris Johnson. While Johnson has often seemed to flounder and flip-flop his way through the biggest national crisis in decades, Scottish leader Nicola Sturgeon has won praise for her sober, straight-talking response. By Jill Lawless. SENT: 1,050 words, photos. 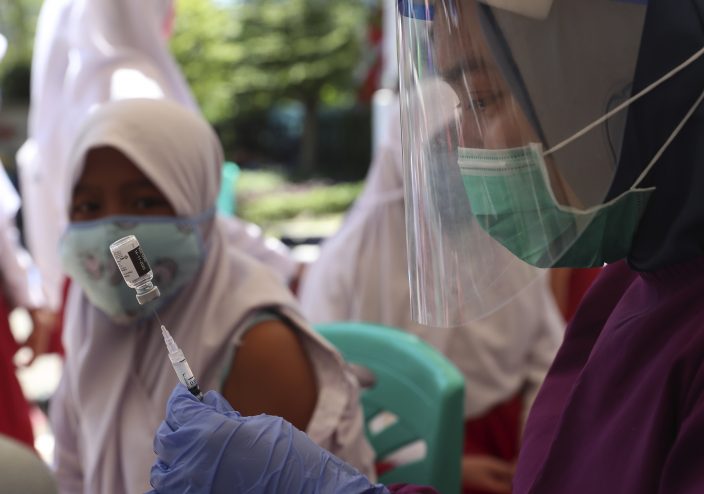 Health workers prepares to give a HPV vaccine shot to an elementary school student during a free vaccination service for school children in Jakarta,Indonesia, Tuesday, Aug. 25, 2020. (AP PhotoAchmad Ibrahim)

LEBANON-IMPERVIOUS-TO-CHANGE — Three weeks after a catastrophic explosion ripped through Beirut, killing nearly 200 people and rendering thousands homeless, the change many hoped for is nowhere in sight. Instead, activists say they are back to square one. The same politicians whose corruption and negligence the public blames for the disaster are negotiating among themselves over forming a new government. By Samya Kullab. SENT: 1,000 words, photos.

LIBERTY-FALWELL — Jerry Falwell Jr.’s future at evangelical Liberty University amid a sex scandal was uncertain, after the school said he had offered his resignation but then reversed course. Falwell agreed to “resign immediately as President of Liberty University today but then instructed his attorneys to not tender the letter for immediate resignation,” according to a university news release. By Sarah Rankin and Elana Schor. SENT: 800 words, photos. 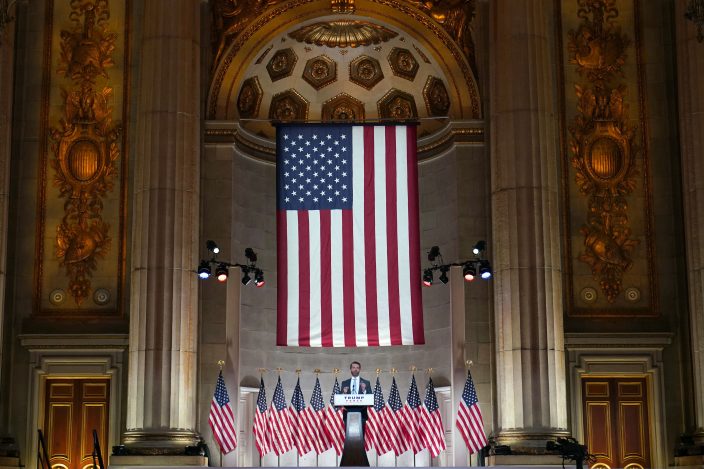 Donald Trump Jr., speaks as he tapes his speech for the first day of the Republican National Convention from the Andrew W. Mellon Auditorium in Washington, Monday, Aug. 24, 2020. (AP PhotoSusan Walsh)

VIRUS OUTBREAK-STURGIS — The hundreds of thousands of bikers who attended the Sturgis Motorcycle Rally may have departed western South Dakota, but public health departments in multiple states are trying to measure how much and how quickly the coronavirus spread in bars, tattoo shops and gatherings before people traveled home to nearly every state in the country. SENT: 980 words, photos. 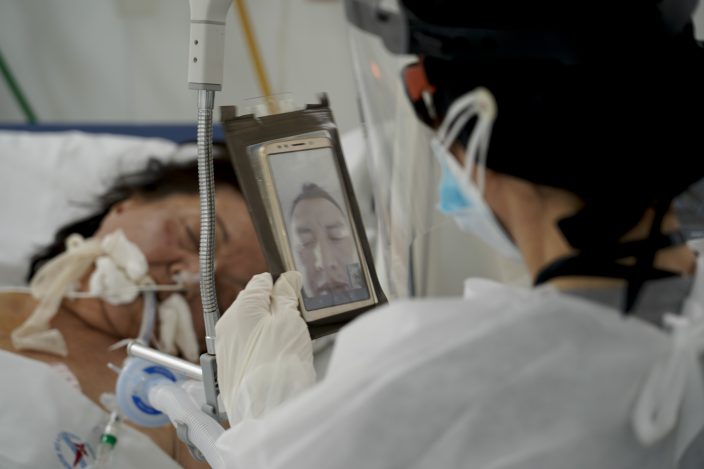 Sebastián Ezequiel Okada, seen on the screen, talks to her mother, Esther Nako, 77, background, as psychologist Romina Tagnotta holds the mobile phone inside the Intensive Care Unit for COVID-19 patients of the Centro Gallego Hospital in Buenos Aires, Wednesday, Aug. 19, 2020. Tagnotta is in charge of connecting relatives with patients, who now due to the pandemic cannot receive personal visits. Nako passed away on Aug. 22. (AP PhotoVictor R. Caivano)

VIRUS-OUTBREAK-ASIA — South Korea is closing schools and switching back to remote learning in the greater capital area as the country counted its 12th straight day of triple-digit daily increases in coronavirus cases. SENT: 930 words, photos. With VIRUS-OUTBREAK-THE-LATEST.

VIRUS-OUTBREAK-TOURISM-IMPACT — The tourism global industry has been devastated by the coronavirus pandemic, with $320 billion lost in exports in the first five months of the year and more than 120 million jobs at risk, the U.N. chief says. SENT: 440 words, photos.

ELECTION 2020-RNC-GOP FUTURE — The Republican convention casts light on the early, largely behind-the-scenes race that is already under way to determine the future of the party after Trump. SENT: 980 words, photos.

ELECTION 2020-RNC-MELANIA TRUMP — Melania Trump’s address to the Republican National Convention will be her first sustained public appearance since the start of the coronavirus pandemic that has come to define her husband’s administration. SENT: 1,020 words, photos. With ELECTION 2020-RNC-WHAT TO WATCH — Melania Trump, Pompeo and the president himself at GOP convention.

ELECTION 2020-OKLAHOMA — Two Oklahoma City women, each touting their conservative credentials and support for Trump, will face off in a testy GOP primary runoff for the opportunity to unseat the lone Democrat in the state’s congressional delegation. SENT: 410 words, photos. UPCOMING: Polls open at 8 a.m. and close at 8 p.m.

CYBER COMMAND-STRATEGY — The U.S. military’s top cyber official defends the government’s shift toward a more aggressive strategy in cyberspace, saying the mission has evolved over the last decade from “a reactive and defensive posture” to keep pace with sophisticated threats. SENT: 420 words.

CALIFORNIA-WILDFIRES-REDWOODS — Ancient redwoods at California’s oldest state park, some of them 2,000 years old and among the tallest living things on Earth, survived a massive wildfire that swept through last week. SENT: 480 words, photos. With CALIFORNIA-WILDFIRES Crews hoping to keep momentum in California wildfire battles.

TROPICAL WEATHER — As Tropical Storm Marco made landfall, the Gulf Coast turns its attention to Laura, another system following just behind that could grow into a supercharged Category 3 hurricane with winds topping 110 mph and a storm surge that could swamp entire towns. SENT: 1,060 words, photos.

NEW ZEALAND-MOSQUE-SHOOTING-SENTENCING — A man who was shot and wounded in the New Zealand mosque attacks has told the mass-murderer responsible: “You are the loser, and we are the winners.” SENT: 530 words, photos, graphic.

PHILIPPINES-BOMBINGS — The Philippine army chief says that two Islamic militants who blew themselves up were responsible for the bombings that killed at least 14 people and wounded 75 more, the country’s worst extremist attack this year. SENT: 500 words, photos.

THAILAND-PROTESTS — Four prominent Thai anti-government activists answer summonses at a Bangkok police station, the latest in a series of legal moves by the authorities to clamp down on protests that are the most serious challenge yet to Prime Minister Prayuth Chan-ocha’s administration. SENT: 540 words, photos.

FINANCIAL-MARKETS — Asian shares were mostly higher as investors hung onto hopes the coronavirus pandemic may come under control with treatments being developed. By Business Writer Yuri Kageyama. SENT: 400 words, photos.

ELECTION 2020-RNC-MEDIA — The opening of the Republican National Convention offered quick proof that how it is covered by the news media will be an ongoing sore spot. By Media Writer David Bauder. SENT: 820 words, photos.

AP TOP 25-REALITY CHECK — Imagine for a moment the possibility that the pandemic will allow two college football seasons to be played from beginning to end with no interruptions. By College Football Writer Ralph D. Russo. SENT: 1,000 words, photos.