J.T. Realmuto hit a three-run homer, Jake Arrieta pitched five strong innings before a rain delay of more than an hour ended his night, and the Philadelphia Phillies beat the Washington Nationals 8-3 on Tuesday night.

Realmuto ripped his ninth homer — his first since Aug. 14 — in the third inning off right-hander Erick Fedde. His shot bounced up off the top of the right field wall, then fell in the Nationals’ bullpen while Washington outfielder Adam Eaton looked on helplessly.

Shortstop Trea Turner hit his sixth homer to lead off the first, extending his hitting streak to 11 games, but that was all the Nationals could muster off Arrieta (2-3). The former Cy Young Award winner needed just 54 pitches to breeze through five innings. He struck out only one, but induced three inning-ending double plays. 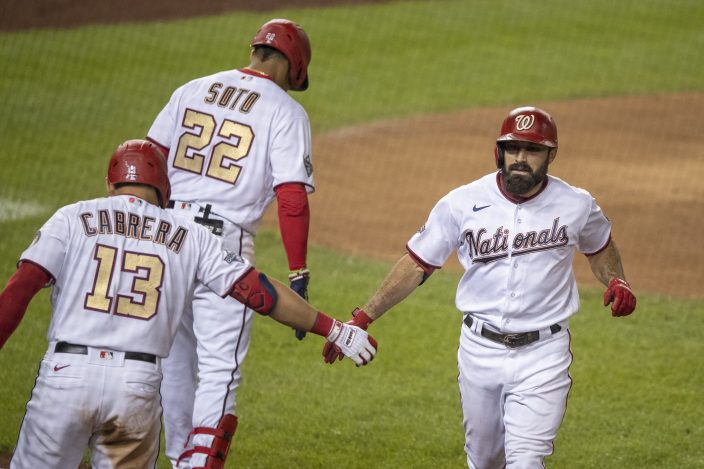 Washington Nationals' Adam Eaton, right, is congratulated by teammates Asdrubal Cabrera (13) and Juan Soto (22) after hitting a home run during the sixth inning of a baseball game against the Philadelphia Phillies in Washington, Tuesday, Aug. 25, 2020. (AP PhotoManuel Balce Ceneta)

The last of those came in the fifth, immediately after which a downpour finished Arrieta’s night.

Eaton hit a solo homer in the sixth to pull the Nationals within 4-2, but Philadelphia scored the next inning when Roman Quinn beat Turner’s throw home on Andrew McCutchen’s fielder’s choice grounder. Alec Bohm added an RBI single on the eighth.

Fedde (1-2) gave up four runs while allowing seven hits and a walk in five innings. He struck out one and has six strikeouts in 22 2/3 innings this season. 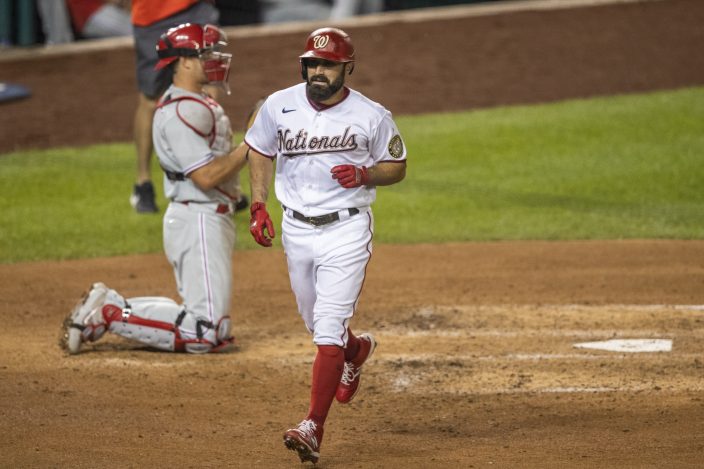 Bryce Harper, who won the 2015 NL MVP during a seven-year stint with the Nationals before joining Philadelphia last season, was 1 for 3 with two intentional walks in his first game against Washington this year.

Phillies: LHP Jose Alvarez, who was placed on the injury list with a testicular contusion after getting hit by a liner Thursday, isn’t supposed to throw for two weeks from the date he was injured. It’s uncertain how quickly he could return to the bullpen after he resumes throwing. ... LHP Ranger Suarez has at least two more rehab outings. Suarez hasn’t pitched this season after testing positive for COVID-19 before camp. He’ll pitch out of the bullpen once he returns. 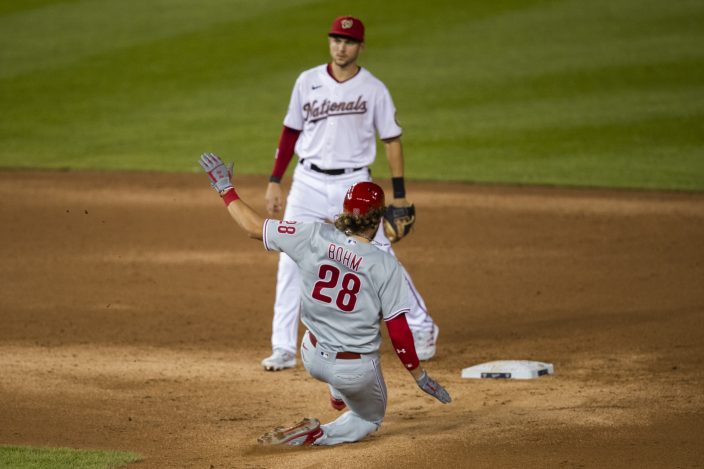 Nationals: INF Howie Kendrick was out of the lineup for a routine off day. He had played three days in a row after missing five games with a hamstring injury. “I want to make sure that we continue to have him for the rest of the year,” manager Dave Martinez said.

Washington CF Victor Robles made a stellar two-part play in the sixth. He first leaped to track down Bohm’s fly to deep center, then zipped a throw on the fly to first to double off Jean Segura, who was already around second when Robles made the catch. 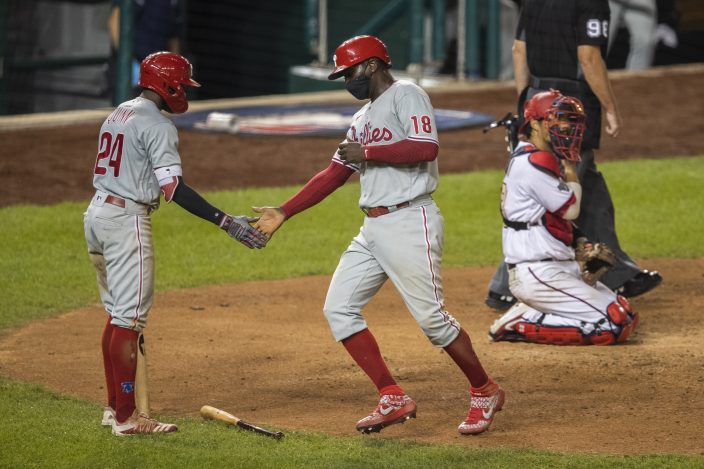 Philadelphia Phillies' Didi Gregorius, center, is congratulated by teammate Roman Quinn, left, next to Washington Nationals catcher Yan Gomes, right, after scoring a run on a single by Alec Bohm, during the eighth inning of a baseball game in Washington, Tuesday, Aug. 25, 2020. (AP PhotoManuel Balce Ceneta)

Phillies: RHP Aaron Nola (2-2, 3.10), who gave up four runs in a career-low 2 2/3 innings at Atlanta on Friday, starts for Philadelphia as the series continues.