Tony Kemp scored three runs without hitting the ball out of the infield, starting on a wild pitch in the second inning when he took a huge lead with a shift on and came home even though the ball didn't go far from the plate. The speedy second baseman walked, was hit by a pitch and had an infield single.

Olson put the AL West-leading A's ahead for good at 3-1 with his 10th homer, a 453-foot drive over the Texas bullpen in right-center field in the fourth. Semien went deep for his fifth an inning later. 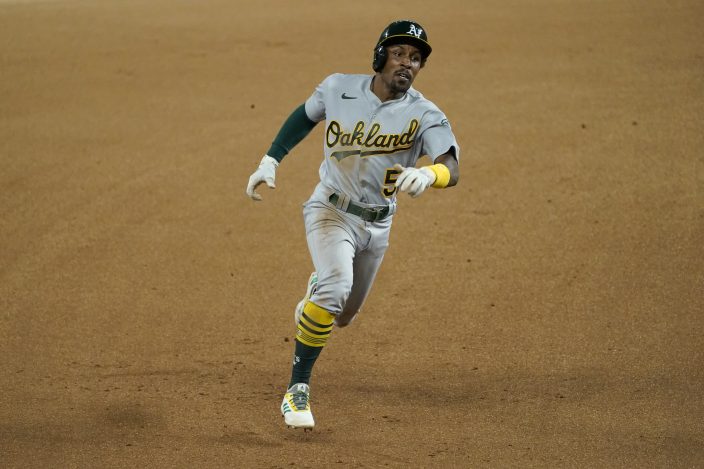 Oakland Athletics' Tony Kemp advances to third on a single by Jonah Heim in the seventh inning of a baseball game against the Texas Rangers in Arlington, Texas, Tuesday, Aug. 25, 2020. (AP PhotoTony Gutierrez)

Piscotty's three-run double down the line in left in the seventh came after Texas reliever Ian Gibaut forced home two runs with a walk and the fourth hit-batter of the game when he plunked Mark Canha.

The right-hander wasn't ejected even though a warning had been issued when Sean Manaea hit Robinson Chirinos two innings earlier. It was Gibaut's last batter anyway because manager Chris Woodward took him out.

Oakland's Matt Chapman was the first to get hit, on a 91 mph pitch from Kyle Gibson that glanced off the ear flap on his batting helmet leading off the fourth. After a brief medical check, Chapman stayed in the game. Kemp was hit by Gibson leading off the fifth. 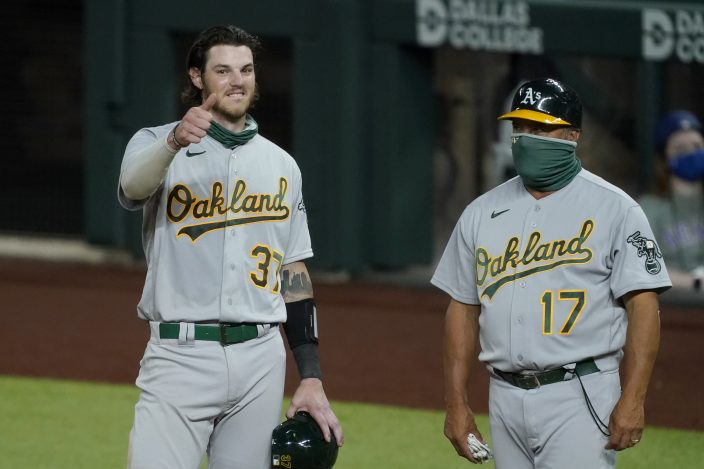 Oakland Athletics' Jonah Heim (37) gestures to the dugout after hitting a single off of Texas Rangers starting pitcher Kyle Gibson as first base coach Mike Aldrete, right, stands by in the seventh inning of a baseball game in Arlington, Texas, Tuesday, Aug. 25, 2020. The single was Heim's first major league hit. (AP PhotoTony Gutierrez)

Manaea (2-2) allowed three runs, one earned, in five innings as the lefty won his second straight start after going winless in his first five.

A's catcher Jonah Heim had his first career hit in his major league debut, a single in the seventh. 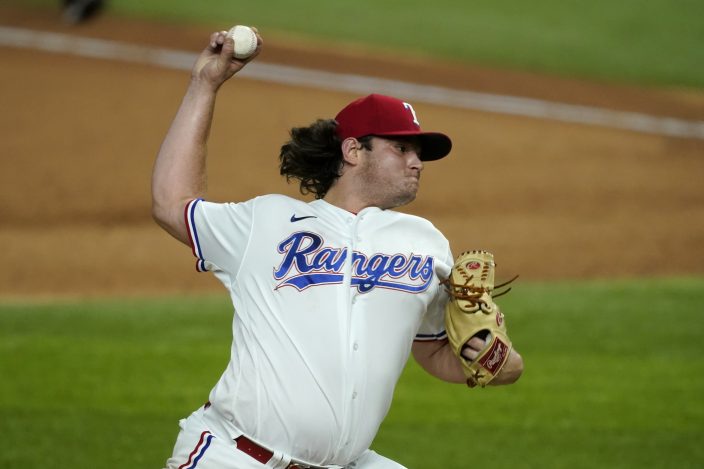 Nick Solak singled in two runs to get the Rangers within 5-3 in the fifth, a night after they stopped an eight-game losing streak with a win in the series opener.

Athletics: Utility man Chad Pinder is on the paternity list awaiting the birth of his first child. He had to scramble home Tuesday morning with the baby possibly arriving earlier than the September due date. The A's added OF Seth Brown from the taxi squad. 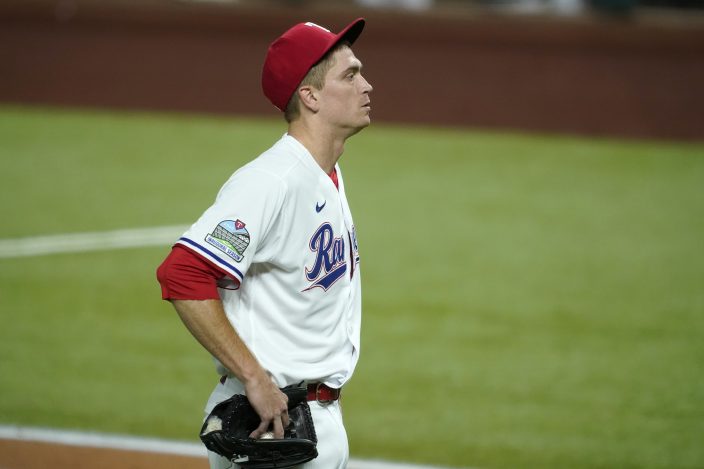 Texas Rangers starting pitcher Kyle Gibson stands by watching as Oakland Athletics' Matt Chapman receives attention after being hit in the head with a pitch from Gibson in the fourth inning of a baseball game in Arlington, Texas, Tuesday, Aug. 25, 2020. Chapman continued playing in the game. (AP PhotoTony Gutierrez)

Rangers: 2B Rougned Odor was a late scratch because of a right eye infection. ... OF-DH Shin-Soo Choo missed a sixth straight game without being on the injured list because of various ailments highlighted by an oblique injury. Woodward said the club still believes Choo can return before the 10-day mark. 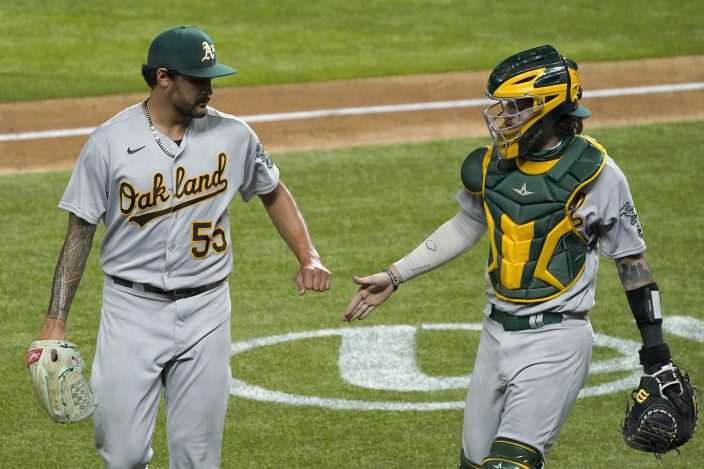 Oakland Athletics' Sean Manaea (55) and Jonah Heim, right, walk off the field to the dugout after working in the bottom of the fifth inning of a baseball game against the Texas Rangers in Arlington, Texas, Tuesday, Aug. 25, 2020. (AP PhotoTony Gutierrez)