Oakland Athletics right-hander Mike Fiers allowed only an unearned run over six innings while getting his team yet another win over the Texas Rangers, 3-1 on Wednesday night.

Fiers (4-1) struck out seven and scattered three hits in his six innings. He is 6-0 with a 3.18 ERA in his last nine starts against Texas, with his team winning every one of those games — the first two for the Detroit Tigers in 2018 before he was traded to the A’s late that season.

Oakland has the American League's best record at 22-10, including a 19-6 mark record in August for its most wins in any month since also winning 19 in September 2013. Texas has lost 10 of its last 11 games. 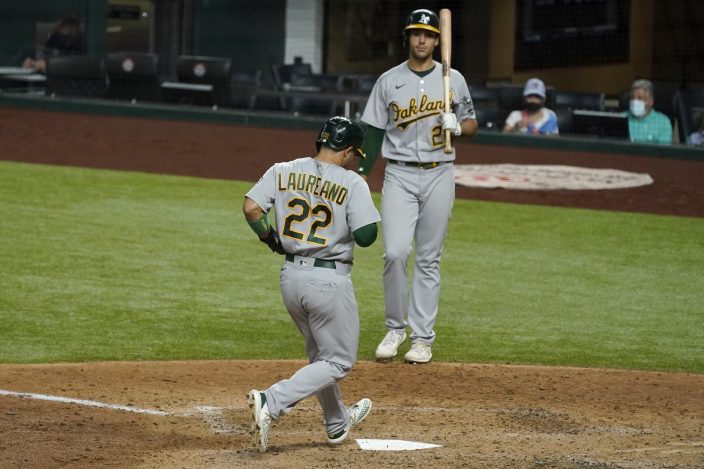 The A's didn't have a hit until Stephen Piscotty’s one-out RBI single in the sixth inning that tied the game at 1-1, right after young Texas lefty Kolby Allard (0-3) walked the previous two batters. Allard then issued another walk to load the bases before reliever Luis Garcia's wild pitch allowed the go-ahead run.

The last time Texas lost more consecutive games started by an individual pitcher was 12 in a row by Bartolo Colon from August 2003 until May 2007, for the Chicago White Sox and the Los Angeles Angels.

Former Rangers relievers Joakim Soria and Jake Diekman each had a scoreless inning before Liam Hendricks worked a perfect ninth for his 10th save in 11 chances. Diekman has not allowed a run in his first 12 appearances, and Hendricks has converted 10 consecutive save chances. 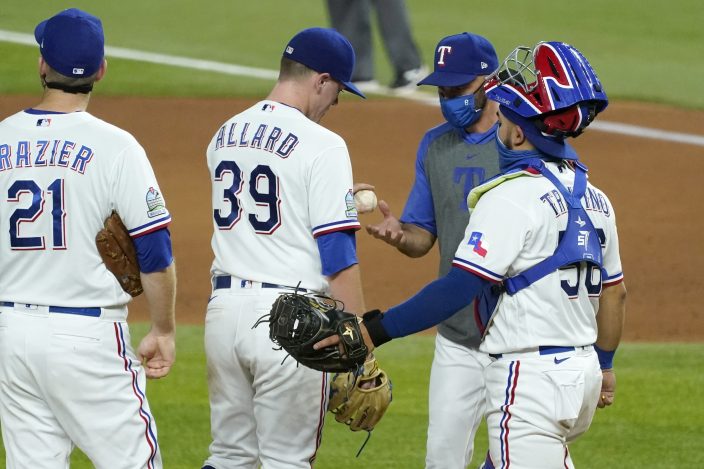 Oakland had three consecutive singles to start the seventh against Jonathan Hernandez, who then hit Robbie Grossman with a pitch to force in a run. Nick Goody, activated from the injured list Wednesday after missing 12 games because of back spasms, struck out the next three batters.

The only Texas run came on catcher Sean Murphy's throwing error on a double steal with two outs in the third that allowed both runners to take an extra base.

Allard, the youngest Rangers pitcher after turning 23 earlier this month, struck out five and walked four in his fifth start since taking over the rotation spot of injured two-time AL Cy Young winner Corey Kluber. Athletics: 3B Matt Chapman didn't start a night after getting hit by a pitch off the ear flap of his batting helmet, but entered the game as a defense replacement in the eighth inning. Manager Bob Melvin said during pregame that Chapman had a headache after Tuesday night's game, and felt better Wednesday before the headache returned after he hit in the batting cage.

Rangers: 2B Rougned Odor missed his second game in a row with an infection in his right eye that manager Chris Woodward called “pretty significant.” ... Shin-Soo Choo was back in the lineup after missing six games with calf and oblique issues. 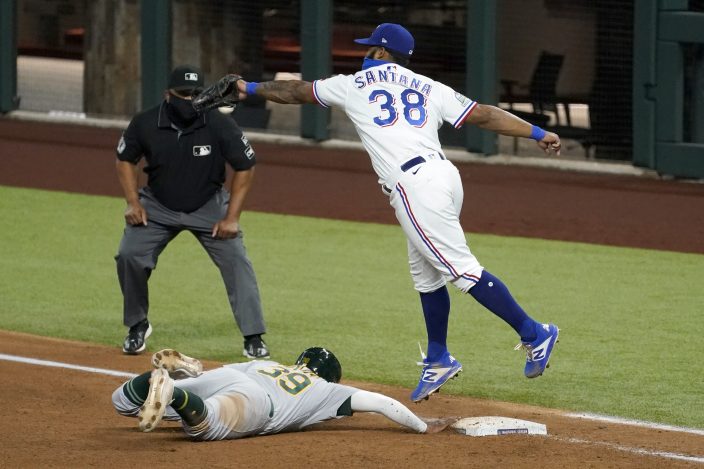 Oakland Athletics' Vimael Machin, left, gets back to first as Texas Rangers' Danny Santana, right, reaches out attempting to reach the overthrow to the bag in the seventh inning of a baseball game in Arlington, Texas, Wednesday, Aug. 26, 2020. First-base umpire Adrian Johnson looks on. (AP PhotoTony Gutierrez)

Right-hander Chris Bassitt (2-1, 2.97) pitches the finale of the four-game series for the Athletics. Rangers starter Jordan Lyles (1-3, 9.25) gave up eight runs in four innings Saturday at Seattle, and his 26 runs allowed are the second-most in the majors. 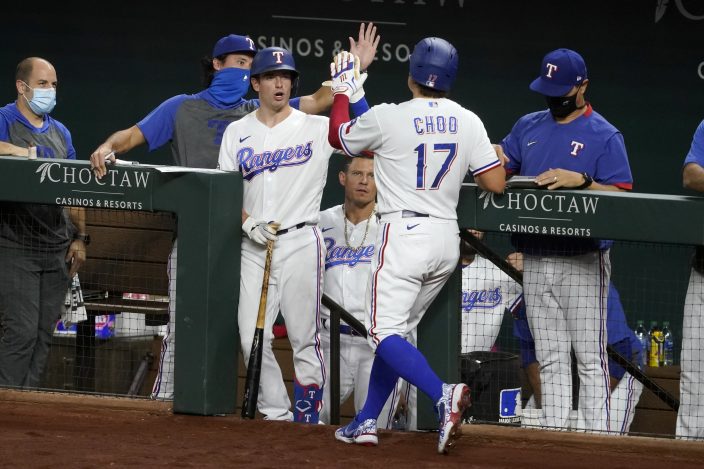 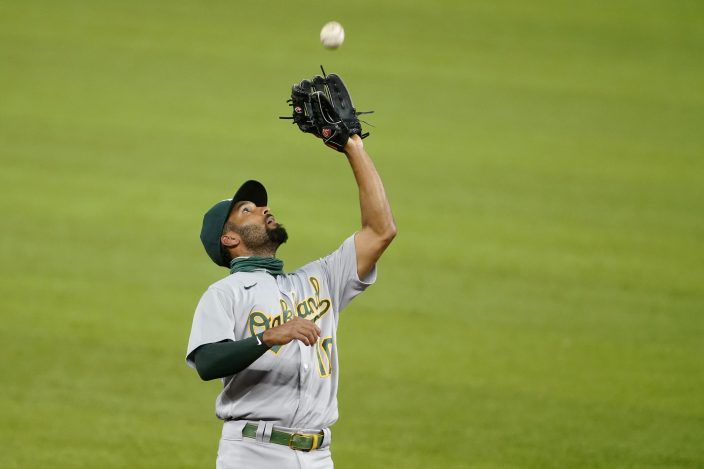 Oakland Athletics shortstop Marcus Semien reaches up to field a fly out by Texas Rangers' Todd Frazier in the first inning of a baseball game in Arlington, Texas, Wednesday Aug. 26, 2020. (AP PhotoTony Gutierrez) 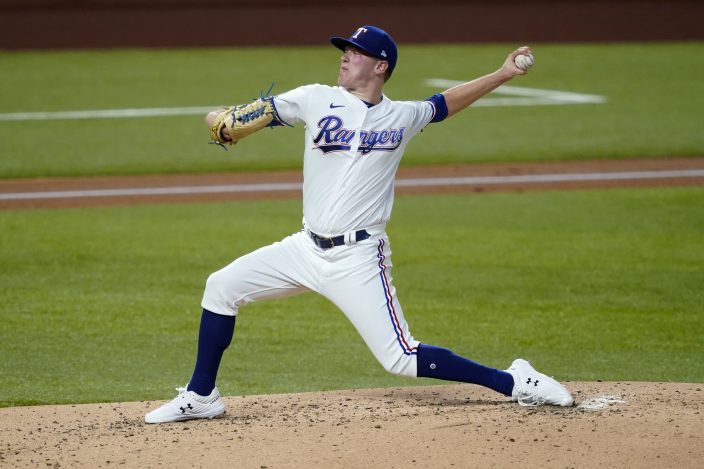 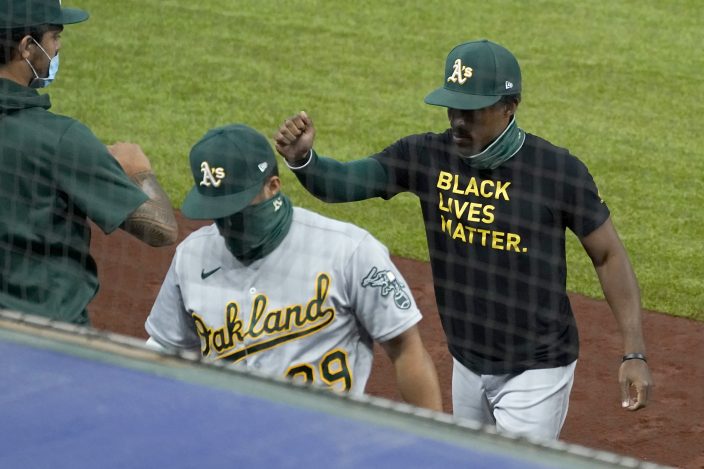