Charlie Blackmon hit a grand slam to help Colorado build a big lead and the Rockies held on during a tense ninth inning to beat the Arizona Diamondbacks 8-7 on Wednesday night.

Blackmon's second career slam made it 8-1 in the top of the eighth. After the Diamondbacks scored twice in the bottom half of the inning, they rallied for four runs in the ninth.

Christian Walker’s two-run single — which was inches shy of being a game-winning homer — pulled the D-backs within an 8-7 margin. Jeff Hoffman earned his first big league save when Nick Ahmed struck out looking with the bases loaded to end the game. 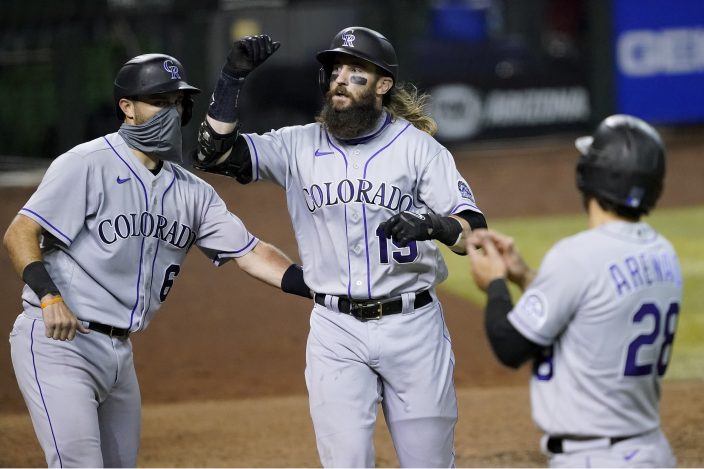 Colorado has won three straight and will go for the four-game sweep on Thursday. Arizona has lost a season-high eight in a row.

Rockies veteran outfielder Matt Kemp, who is Black, didn’t play. He announced on social media that he was protesting “in honor of all of my fallen brothers and sisters at the hands of police brutality.”

Much of the American sports landscape was silent in support of racial injustice by Wednesday night but the D-backs and Rockies decided to play. The other two late West Coast baseball games — Dodgers vs. Giants and Mariners vs. Padres — were postponed. 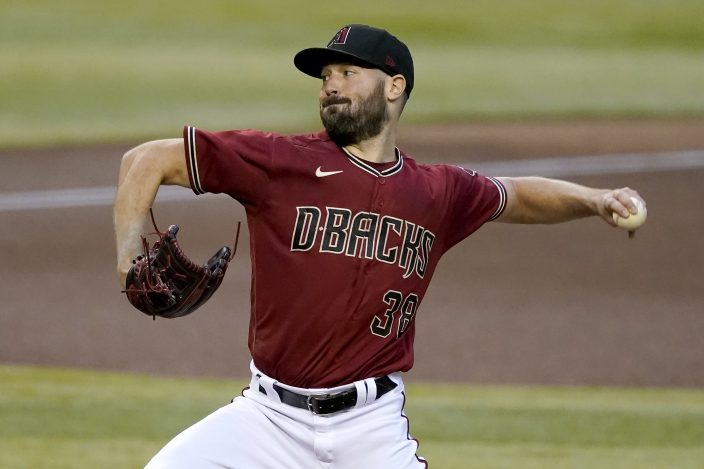 They were among three Major League Baseball games postponed as players across reacted in the wake of the weekend shooting by police of Jacob Blake, a Black man, in Wisconsin. The domino effect started after the NBA's Milwaukee Bucks didn’t come out on the floor for Game 5 of their first-round playoff series with the Orlando Magic on Wednesday afternoon in Florida.

NBA officials later announced that all three of the day’s scheduled playoff games had been postponed. The WNBA also postponed its three games and Major League Soccer postponed five of six games.

Jon Gray (2-3) pitched six innings in his best outing of the season, allowing one run and three hits. He came into the game with a 6.23 ERA and had given up 15 earned runs over his previous 14 innings. 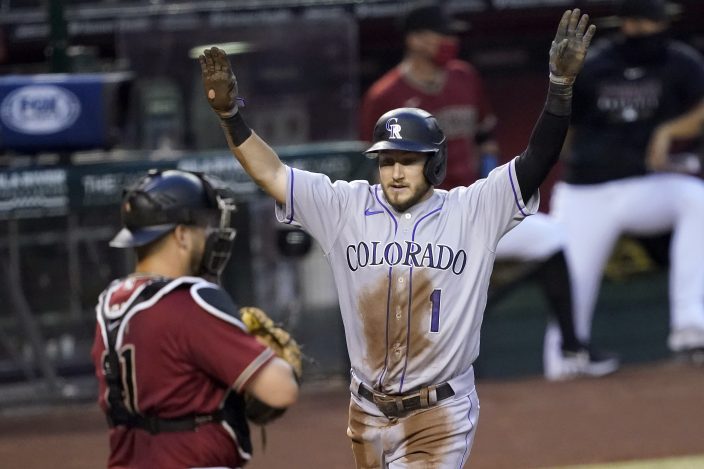 Nolan Arenado hit a two-run double in the first to give the Rockies a 2-0 lead. It remained a tight game until the eighth when Blackmon sent a drive that landed deep in the right-field seats. It was his fourth homer of the season and came off rookie Riley Smith, who was making his big league debut.

It was another frustrating outing for Robbie Ray (1-4), who lasted just four innings and threw 99 pitches. He struck out eight but also walked six and gave up two runs. 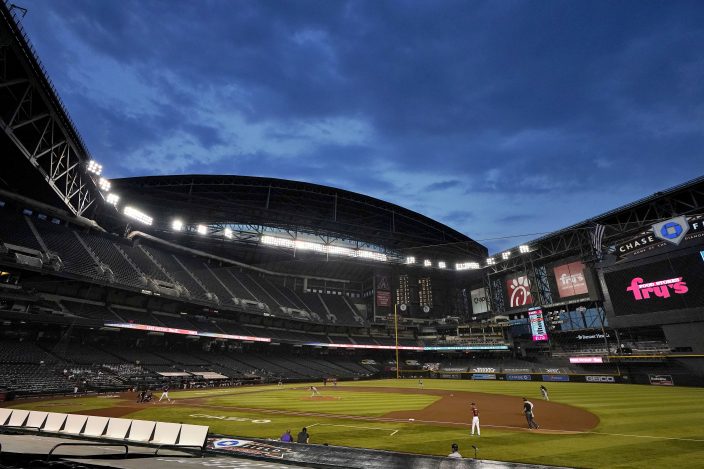 The Colorado Rockies and the Arizona Diamondbacks compete during the first inning of a baseball game, Wednesday, Aug. 26, 2020, in Phoenix. (AP PhotoMatt York)

Rockies: OF Raimel Tapia was a late scratch because of a right elbow contusion. He was hit by a pitch on Tuesday. ... C Tony Wolters didn't start for a second straight game after being hit on the left knee with a foul tip on Monday. He did play a few innings on Tuesday as a late-inning substitute.

Diamondbacks: RHP Merrill Kelly had a blood clot dissolved in his right throwing shoulder on Wednesday. Manager Torey Lovullo said it was unlikely that the 31-year-old would return this season. Kelly was scratched from Monday's start and put on the 10-day injured list with shoulder discomfort. 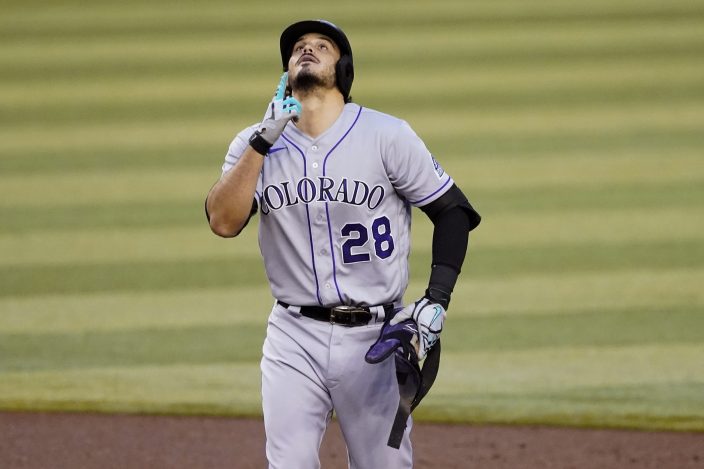 Diamondbacks: RHP Zac Gallen (0-0, 2.25) takes the mound. He's pitched very well over his six starts and 36 innings despite not having a win to show for it. 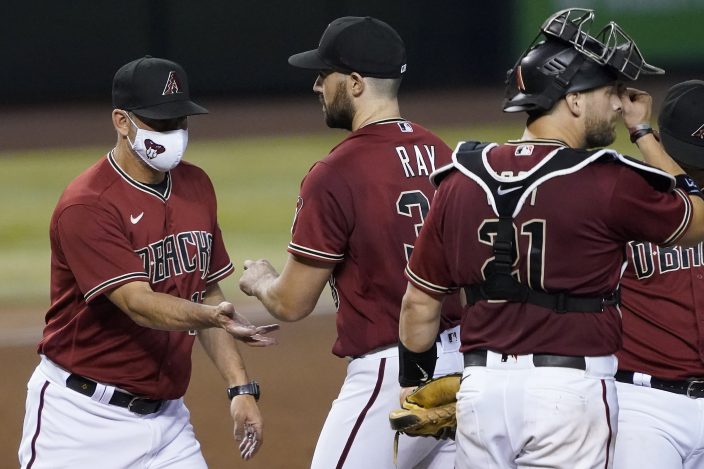 Arizona Diamondbacks starting pitcher Robbie Ray is pulled from the game by manager Torey Lovullo, left, during the fifth inning of a baseball game against the Colorado Rockies, Wednesday, Aug. 26, 2020, in Phoenix. (AP PhotoMatt York) 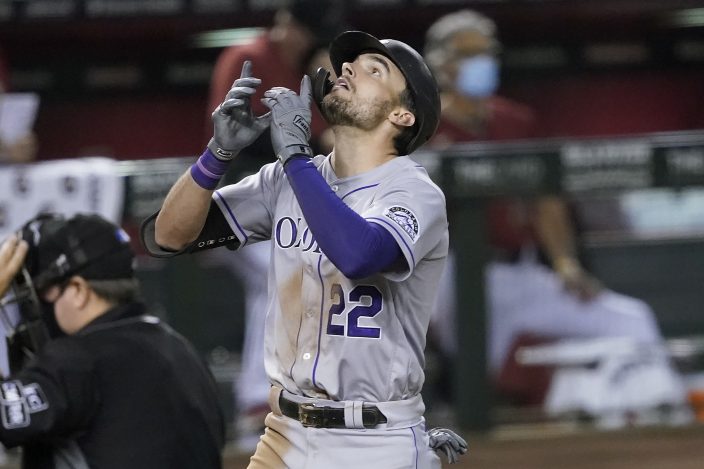