Jesse Winker homered twice, prized prospect Jose Garcia singled in his first big league at-bat and the Cincinnati Reds beat the Milwaukee Brewers 6-1 Thursday in a doubleheader opener one day after both teams opted not to play to protest racial injustice.

The reactions by the teams followed the weekend shooting by police of Jacob Blake, a Black man, in Kenosha, Wisconsin, about 40 miles south of Milwaukee. Other major league teams have since followed, with seven games postponed Thursday.

Winker had a two-run shot in the fifth, his eighth, to put the Reds up 5-0 and a solo shot in the third. 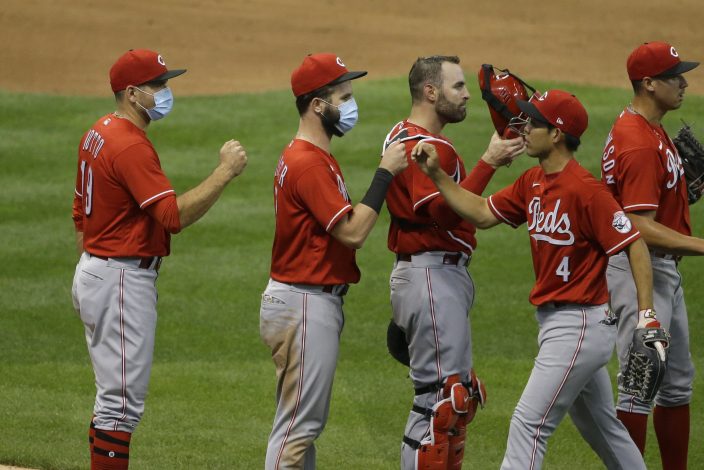 Cincinnati Reds' Joey Votto, left, and Jesse Winker, second from left, celebrate with teammates after the first baseball game of a doubleheader against the Milwaukee Brewers, Thursday, Aug. 27, 2020, in Milwaukee. (AP PhotoAaron Gash)

Omar Narvaez accounted for Milwaukee’s run with a solo homer, his second, in the sixth off Nate Jones.

The 22-year-old Garcia, called up Wednesday, singled with two outs in the second on a slow roller that hit the bag at third, sending Freddy Galvis to second. Curt Casali followed with an RBI single to left to put the Reds up 1-0. 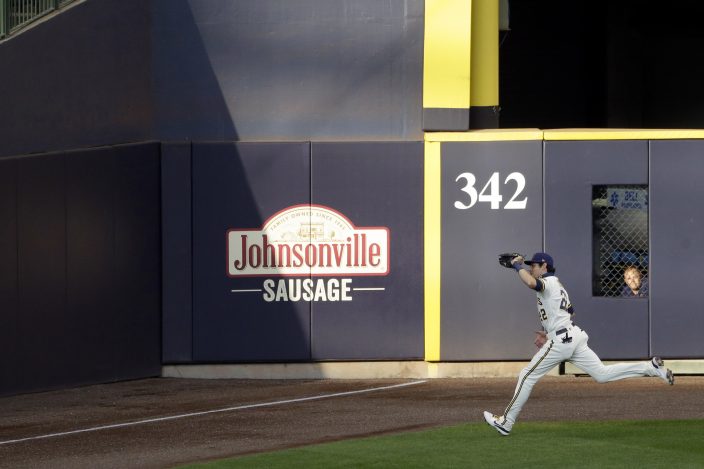 Milwaukee Brewers' Christian Yelich catches a fly ball during the sixth inning of the first baseball game of a doubleheader against the Cincinnati Reds, Thursday, Aug. 27, 2020, in Milwaukee. (AP PhotoAaron Gash)

Nick Castellanos opened the third inning with his 10th homer, sending a 2-2 pitch from Adrian Houser 395 feet to center. Winker followed a drive to left for his seventh homer to make it 3-0.

Castellanos doubled off the glove of third baseman Sogard to open the fifth, chasing Houser. Winker greeted Alex Claudio with a drive to left center. 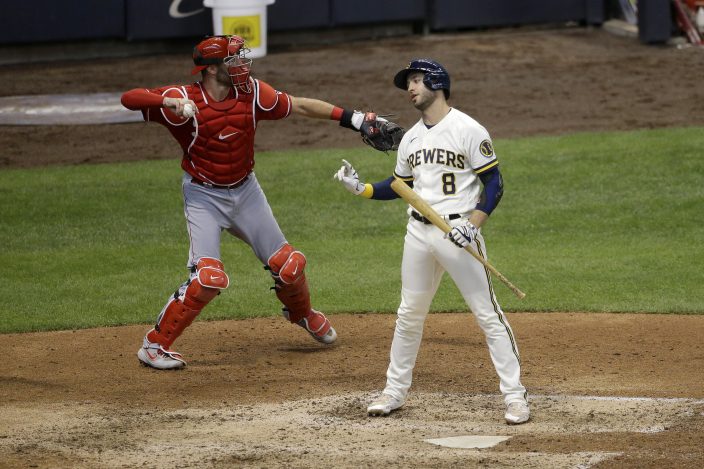 Milwaukee Brewers' Ryan Braun (8) reacts after striking out during the sixth inning of the first baseball game of a doubleheader against the Cincinnati Reds, Thursday, Aug. 27, 2020, in Milwaukee. (AP PhotoAaron Gash)

Castellanos added a sacrifice fly in the sixth to make it 6-0.

Brewers center fielder Lorenzo Cain, who opted out of the remainder of the season after playing in five games, said a large part of his decision was based on his faith. 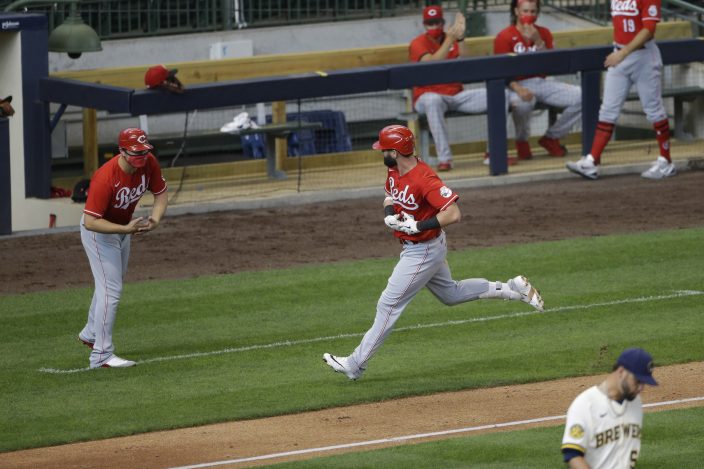 Cincinnati Reds' Jesse Winker, center right, celebrates with third base coach J.R. House after hitting a two-run home run during the fifth inning of the first baseball game of a doubleheader against the Milwaukee Brewers, Thursday, Aug. 27, 2020, in Milwaukee. (AP PhotoAaron Gash)

“The reason I opted out was, of course, for COVID reasons, but this lifestyle and everything that’s going on in 2020 has definitely opened my eyes so I felt the need to opt out not only for the COVID reasons, but also trying to get my life right with God,” Cain said.

“This year has been crazy,” he added. "It’s been a tough year. I’m definitely at a loss for words with all the things going on right now. It’s just tough. The way things are going, it’s tough to see, it’s tough to deal with. We always want things to just get better.”

Reds: Cincinnati moved up LHP Wade Miley for the second game of the doubleheader, and RHP Tyler Mahle (0-1, 4.41 ERA) is expected to open the series Friday night in Chicago against the Cubs.

Brewers: RHP Corbin Burnes (0-0 3.42) makes his seventh appearance and fourth start to open the four-game series Friday against Pittsburgh at Miller Park. Burnes is looking to regain his 2018 rookie form when he went 7-0 with 2.61 ERA in 30 relief appearances.