The conventions finally over, the 2020 election season now enters its final phase. 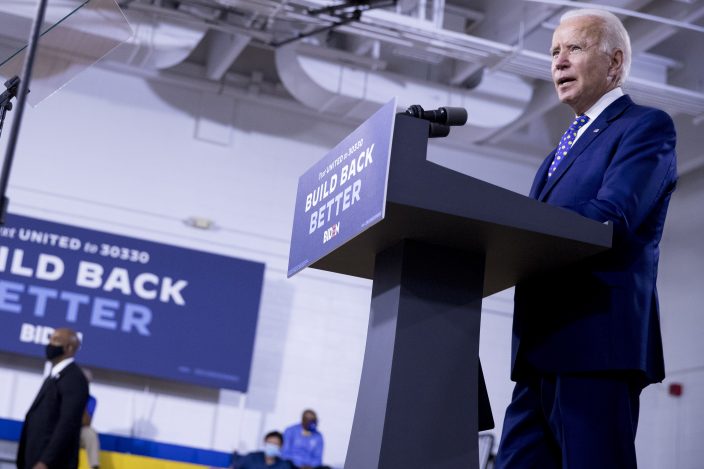 Both sides are pleased with their convention performances which offered dramatically different versions of reality to the American electorate. President Donald Trump is essentially asking voters to judge him based on pre-pandemic America. Joe Biden is asking voters to judge the incumbent on conditions as they actually exist, with the pandemic's death toll mounting, the economy struggling and racial tensions again exploding.

Still, both sides expect the election, which Biden has led for virtually the entire cycle, to tighten entering the nine-week sprint to Nov. 3. Reflecting concerns about potential Trump momentum, Biden plans to resume in-person campaigning in the coming days, albeit with smaller, socially distanced crowds.

Both candidates are focused on Wisconsin this week as a series of violent protests follow yet another police-involved shooting of a Black man caught on camera. Each side believes the incident offers a political advantage, and there may be no more important swing state.

If you judged the state of America based on last week's Republican National Convention, you wouldn't know that more than 180,000 Americans have died because of the pandemic over the last six months and tens of millions more are out of work.

With some glaring exceptions, the president painted a decidedly optimistic picture of American life under his leadership. The only real threat to U.S. prosperity and even safety, he and his allies said, was a Biden victory this fall.

This message fundamentally ignores six months of death and economic destruction under Trump's watch. For any other politician, this would be an extremely tough sell. And it may be for Trump as well. But Trump has demonstrated nothing if not his command of the public spotlight and his loyalists' unquestioned faith in his word.

Is the Democratic freakout about to begin?

Multiple people on Biden's team tell us that they expect polls to tighten in the coming days.

They insist that they always expected Biden's lead to shrink, given the polarized nature of the electorate. But that's unlikely to calm anxious Democrats who desperately want a blowout victory to quash Trump's efforts to undermine the integrity of the election. Democrats' level of urgency has always been high, but expect it to increase exponentially if Biden's lead begins to evaporate.

A tightening race will also test the unity of the Democrats' coalition, a collection of disparate factions that have been remarkably nice to each other, bound in common cause to defeat Trump. Should things start to go south, the finger pointing will almost certainly follow.

Who is winning Kenosha?

White House counselor Kellyanne Conway last week told Fox News that “the more chaos and anarchy and vandalism and violence reigns, the better it is” for Trump.

While Biden seized on her apparent celebration of violence, Trump's campaign believes he is winning the racially charged debate over police brutality heading into the fall. Democrats believed that the sweeping civil unrest that has consumed the nation for much of the summer would help energize people of color against Trump this fall.

The political calculus is far more cloudy. This week may provide some clarity as both candidates are expected to pay particular attention to the situation in Kenosha, Wisconsin, which has emerged as the new epicenter of the debate.

Trump plans to visit the area on Tuesday, and we wouldn't be surprised if Biden made it a priority as well as he resumes in-person campaigning.

Is Joe Biden really getting back on the trail?

After spending nearly six months mostly keeping his head down in Delaware, Biden is planning to return to the campaign trail in the coming days.

While Democrats seemed quite content to have their nominee out of the public spotlight, Republicans are somewhat giddy. They're particularly excited that Biden has named Minnesota as one state he'll be visiting, which is evidence that the former vice president is on defense in at least one state Democrats carried four years ago.

It's unclear exactly what in-person campaigning will look like for Biden, who struggled to draw large crowds even under normal circumstances during the primaries. Several states continue to ban large indoor gatherings. And Biden senior adviser Anita Dunn tells us not to expect the same kind of large, unmasked crowds that showed up for Trump's convention speech last week.

Wherever he goes and whatever his events look like, the exposure offers significant risk and reward for the 77-year-old politician.

Thousands of people crowded onto the National Mall late last week to celebrate the 57th anniversary of Martin Luther King Jr.'s “I have a dream” speech.

We spoke to Martin Luther King III on the eve of the event, and he told us he was “saddened” that Republicans during their convention last week evoked his father's name to help Trump's reelection bid.

King likened Trump's rhetoric on racial divisions to that of Richard Nixon a half-century ago: “It’s just straight racism,” King said. “The hands of the clock are going backwards.”