The man stood in front of the Christ the Redeemer statue in a hazmat suit, gloves, respirator and goggles. Two soldiers wearing face masks bowed their heads solemnly. Over a dozen more in full-body gear paused from disinfecting the popular tourist site overlooking Rio de Janeiro’s skyline and beaches.

About the only clues that the man was a Roman Catholic priest leading the soldiers in prayer were his arms-wide gesture, mirroring that of the iconic hilltop statue, and the pale yellow liturgical stole draped over his head-to-toe personal protective equipment.

This is what faith looks like in the summer of COVID-19 — or winter, of course, in Rio and other Southern Hemisphere locales. In scenes captured this month by Associated Press photographers around the world, religious services, sacred ceremonies and holiday observances took place with people trying to keep themselves and each other safe amid an unabating pandemic. 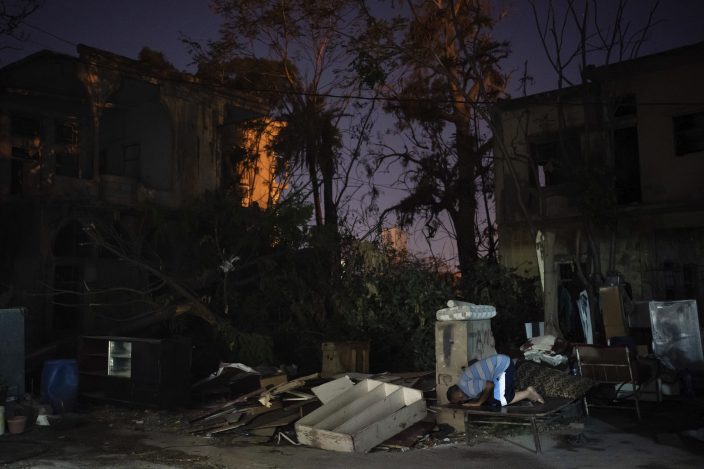 Mohammed Moussa prays on a makeshift bed outside his home, destroyed in the Aug. 4 explosion, in Beirut, Lebanon, on Sunday, Aug. 16, 2020. (AP PhotoFelipe Dana)

People assiduously wore masks as they visited an Istanbul church recently turned into a mosque; while attending a groundbreaking ceremony for a Hindu temple in Jammu, India; as they floated paper lanterns along the Motoyasu River in Japan on the 75th anniversary of the atomic bombing of Hiroshima; crawling in pilgrimage outside a Greek Orthodox island church for the Feast of the Assumption; at a procession marking ‘Gai Jatra,’ or cow festival, in Nepal.

In London, Rabbi David Mason led a Sunday communal prayer service in his synagogue’s outdoor parking lot with just a few pairs of distanced folding chairs set out for congregants — most were watching from home via live video stream just as they did for months previously under a strict lockdown.

Social distancing was also the norm on the beaches of Tel Aviv as Israeli Arab families enjoyed a day outdoors while observing Islam’s Eid al-Adha, a holiday commemorating the prophet Ibrahim’s obedience to God for being willing to sacrifice his son. 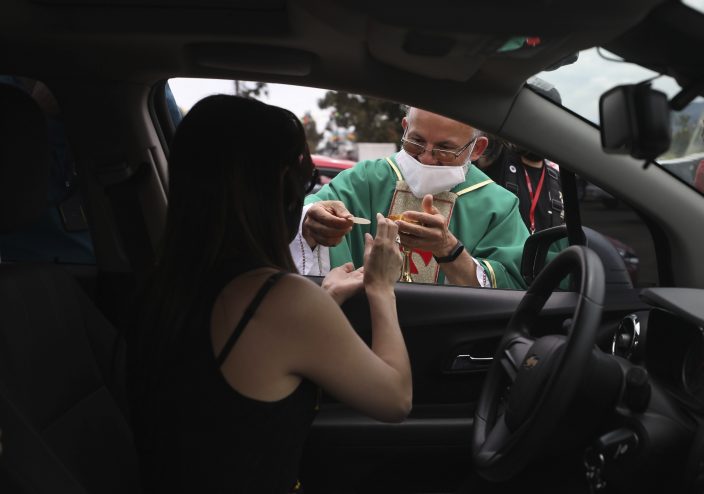 Catholic Priest Luis Carlos Ayala wearing a mask amid the new coronavirus pandemic, hands Communion to a parishioner during a Mass at a drive-in in Chia, Colombia, Sunday, Aug. 30, 2020. For the last three weeks, Father Ayala has been celebrating Mass in the parking lot of the city's former horse racing track, now a venue that has been mostly used for concerts, movies, theater, and other outdoor presentations. (AP PhotoFernando Vergara)

In Beirut, people are reeling from a double blow of not just the pandemic but the Aug. 4 port explosion that shattered windows, businesses and lives. On a recent evening, Mohammed Moussa knelt on a bed frame and pressed his forehead toward the ground in prayer, surrounded by salvaged belongings and the debris of his ruined home. It's an image emblematic of his city's struggles and how some rely on faith in trying times.

These and more are among the AP’s top faith-related images during August. 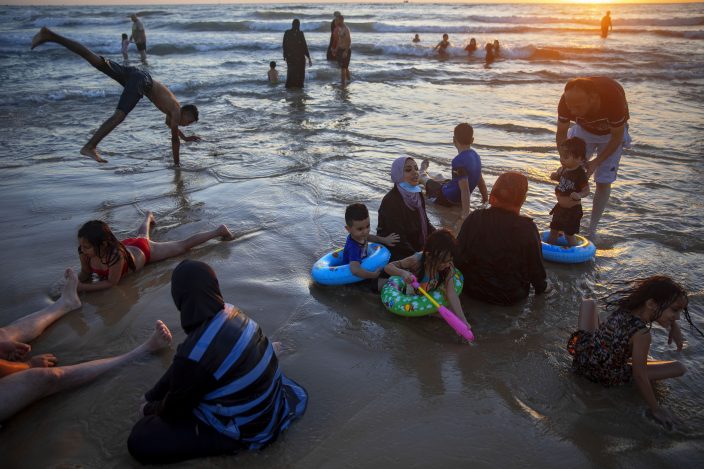 Israeli Arabs, some wearing protective face mask amid concerns over the country's coronavirus outbreak, enjoy the day on the beach during the Eid al-Adha holiday in Tel Aviv, Israel, Aug. 2, 2020. Eid al-Adha, or the Feast of the Sacrifice, is observed by sacrificing animals to commemorate the prophet Ibrahim's faith in being willing to sacrifice his son. (AP PhotoOded Balilty) 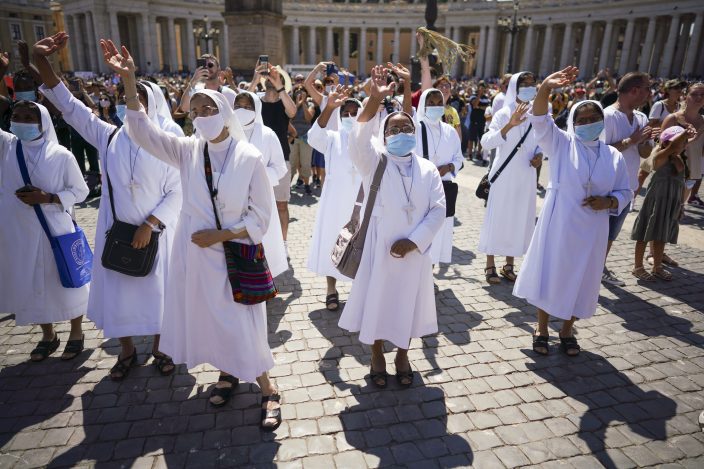 Nuns wave to Pope Francis as he recites the Angelus noon prayer from the window of his studio overlooking St. Peter's Square, at the Vatican, Sunday, Aug. 16, 2020. (AP PhotoAndrew Medichini) 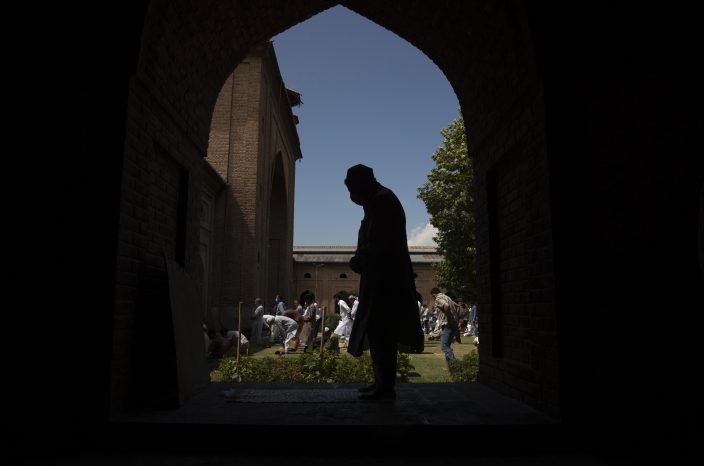 A Kashmiri prays inside Jamia Masjid, or Grand Mosque, in Srinagar, Indian Controlled Kashmir, Aug. 21, 2020. After the gap of almost 5 months Friday prayers were organized inside the Grand Mosque as shrines and other religious places across the Jammu and Kashmir reopened for devotees on Sunday after remaining closed due to the COVID-19 pandemic. (AP PhotoDar Yasin) 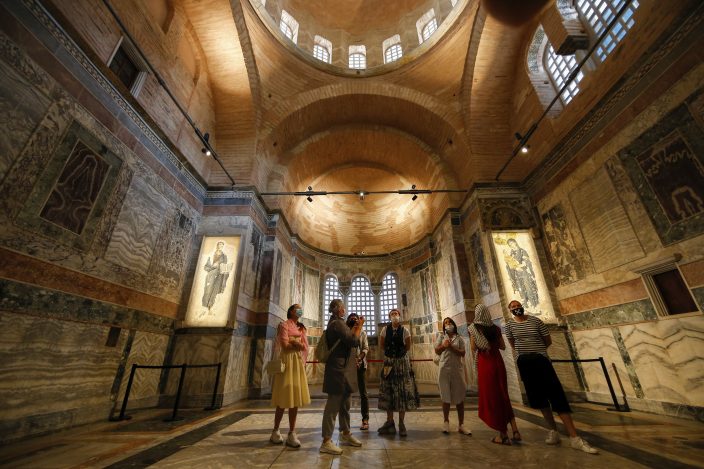 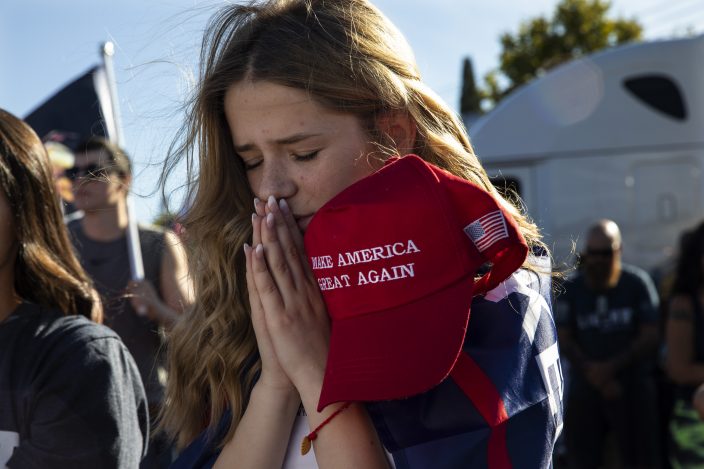 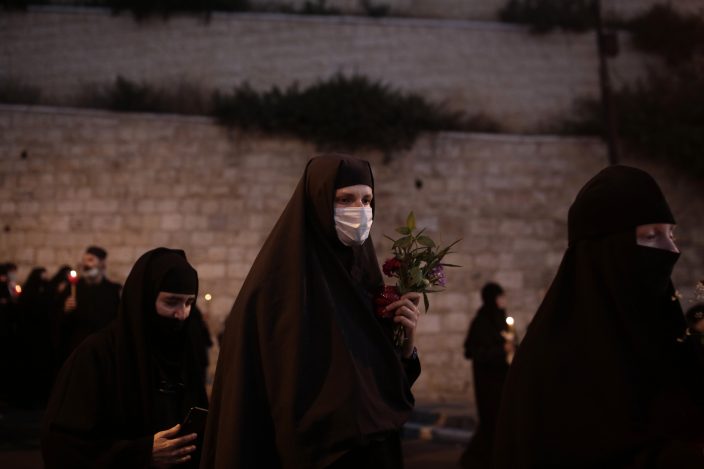 Orthodox nuns wearing masks as a measure of prevention against the spread of the coronavirus walk in a procession to bring the icon of the Virgin Mary from the Church of the Holy Sepulchre to the tomb where she is believed to be buried, outside of the Lions' Gate to Jerusalem's Old City, early Tuesday, Aug. 25, 2020. (AP PhotoMaya Alleruzzo) 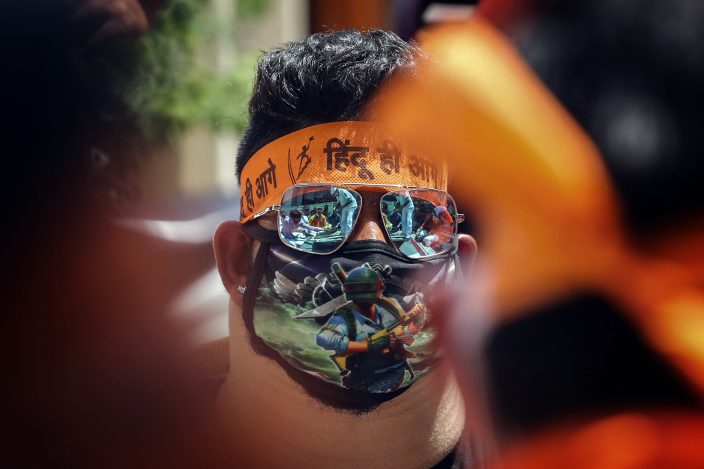 An activist of Rashtriya Bajrang Dal participates in a ceremony to mark the groundbreaking ceremony of a temple dedicated to the Hindu god Ram in Ayodhya, and the first anniversary of India's decision to revoke article 370, in Jammu, India, Aug 5, 2020. Despite the coronavirus restricting a large crowd, Hindus rejoiced as Indian Prime Minister Narendra Modi broke ground Wednesday on a long-awaited temple of their most revered god Ram at the site of a demolished 16th century mosque. (AP PhotoChanni Anand) 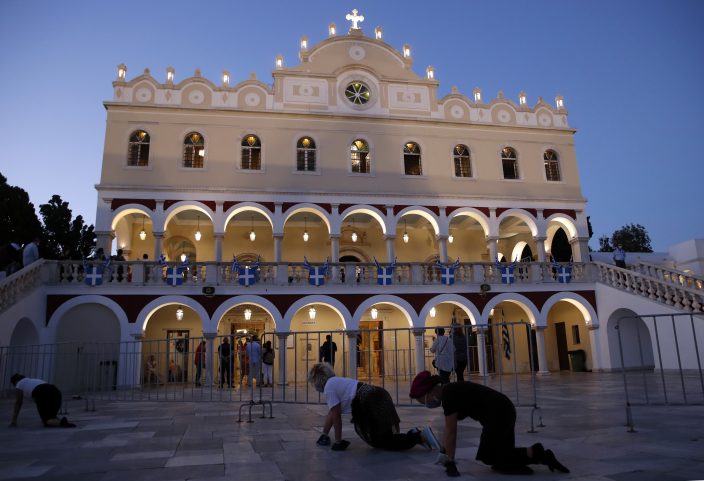 Pilgrims crawl in front of the Holy Church of Panagia of Tinos, on the Aegean island of Tinos, Greece, on Friday, Aug. 14, 2020. For nearly 200 years, Greek Orthodox faithful have flocked to Tinos for the Aug. 15 feast day of the Assumption of the Virgin Mary, the most revered religious holiday in the Orthodox calendar after Easter. But this year there was no procession, the ceremony, like so many lives across the globe, upended by the coronavirus pandemic. (AP PhotoThanassis Stavrakis) 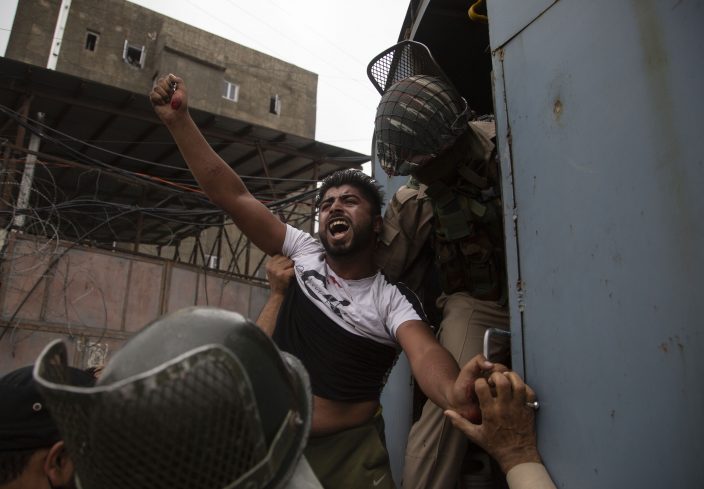 A Kashmiri Shiite Muslim shouts slogans after being detained by police as they attempt to take out a religious procession in Srinagar, Indian controlled Kashmir, Aug. 28, 2020. Police and paramilitary soldiers detained dozens of Muslims participating in religious processions in the Indian portion of Kashmir. Authorities had imposed restrictions in parts of Srinagar, the region's main city, to prevent gatherings marking Muharram from developing into anti-India protests. (AP PhotoMukhtar Khan) 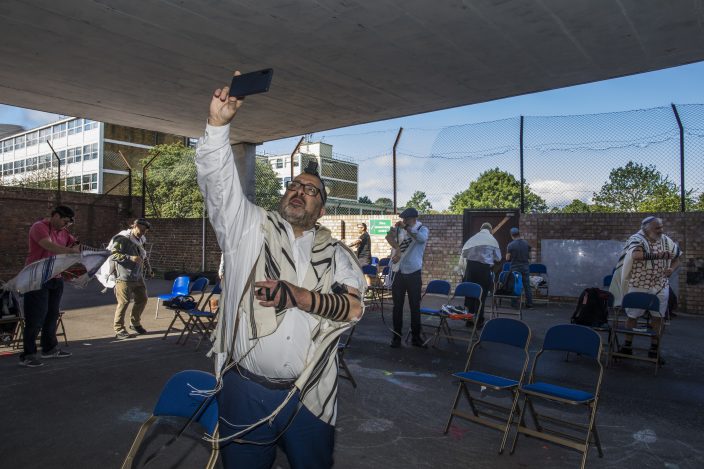 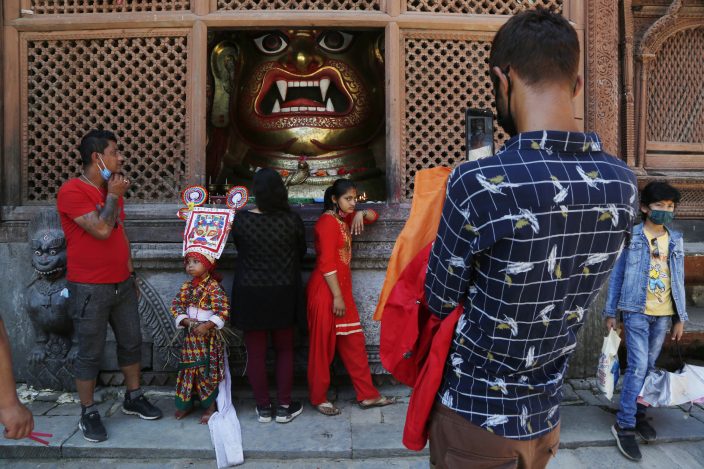 A Nepalese girl stands for a photograph in front of an idol of Swet Bhairav statue while participating in a procession to mark 'Gai Jatra', or cow festival, in Kathmandu, Nepal, Aug. 4, 2020. The festival is celebrated by the Newar community in memory of deceased family members who died the preceding year, believing that the cow will guide them in their journey to heaven. (AP PhotoNiranjan Shrestha) 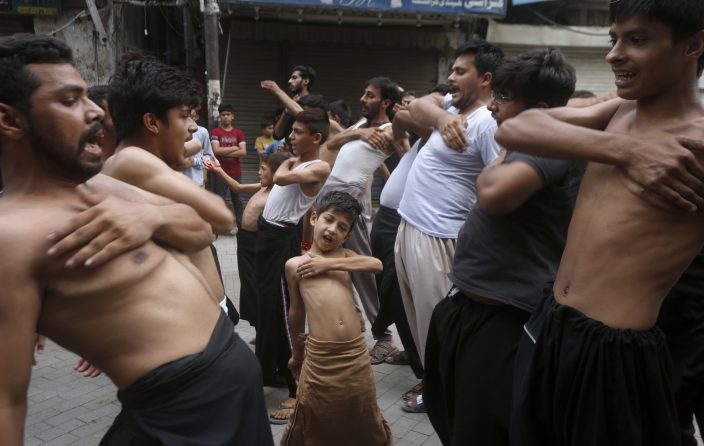 A Shiite Muslim boy beat his chest with others during a Muharram procession, in Lahore, Pakistan, Aug. 28, 2020. Muharram, the first month of the Islamic calendar, is a month of mourning in remembrance of the death of Hussein, the grandson of the Prophet Muhammad, at the Battle of Karbala in present-day Iraq in the 7th century. (AP PhotoK.M. Chaudary) 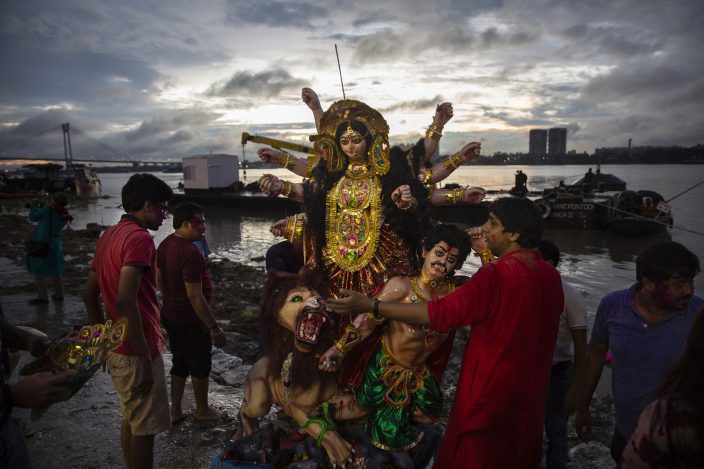 Indian Hindu devotees prepare to immerse an idol of goddess Durga in the river Hooghly, a distributary of the river Ganges, in Kolkata in the eastern Indian state of West Bengal, Oct. 9, 2019. Hundreds of thousands of idols are immersed into the Ganges and other rivers across the country on Durga Puja festival, causing serious concerns of environmental pollution. The Hooghly is also known as the Ganga river by locals. (AP PhotoAltaf Qadri) 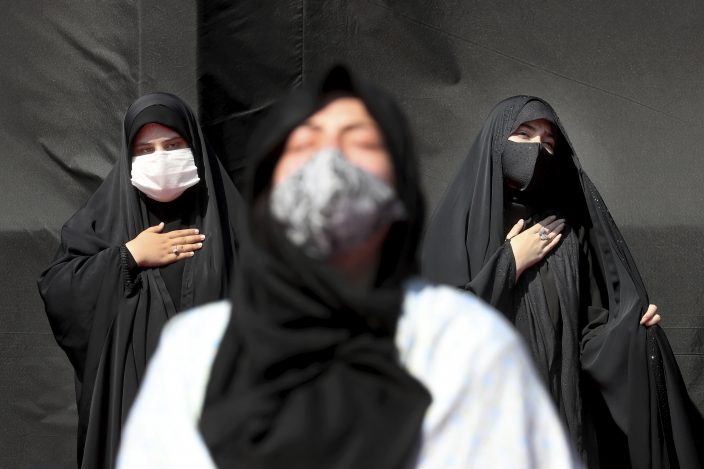 Women wearing protective face masks to help prevent spread of the coronavirus mourn during an annual ceremony commemorating Ashoura at the Saleh shrine in northern Tehran, Iran, Sunday, Aug. 30, 2020. Ashoura is the anniversary of the 7th century death of Imam Hussein, a grandson of Prophet Muhammad, and one of Shiite Islam's most beloved saints, who was killed in a battle in Karbala in present-day Iraq. (AP PhotoEbrahim Noroozi) 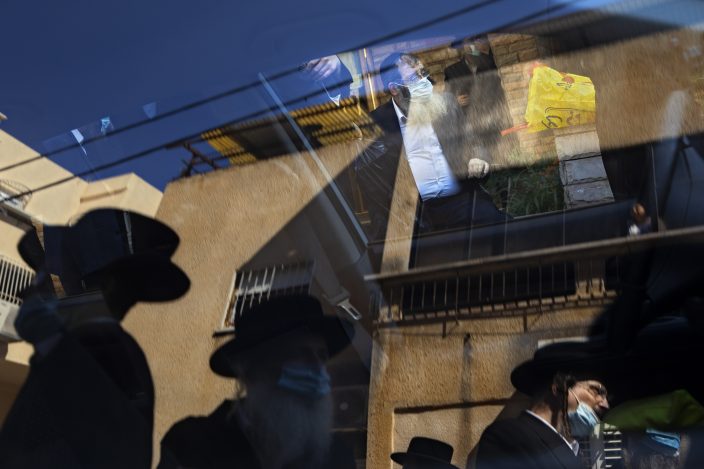 Ultra-Orthodox Jews, followers of the Hasidic sect of Shomrei Emunim, wearing protective face masks amid concerns over the country's coronavirus outbreak, gather for the funeral of their Rabbi Refael Aharon Roth, 72, who died from the coronavirus, in Bnei Brak, Israel, Aug. 13, 2020. (AP PhotoOded Balilty) 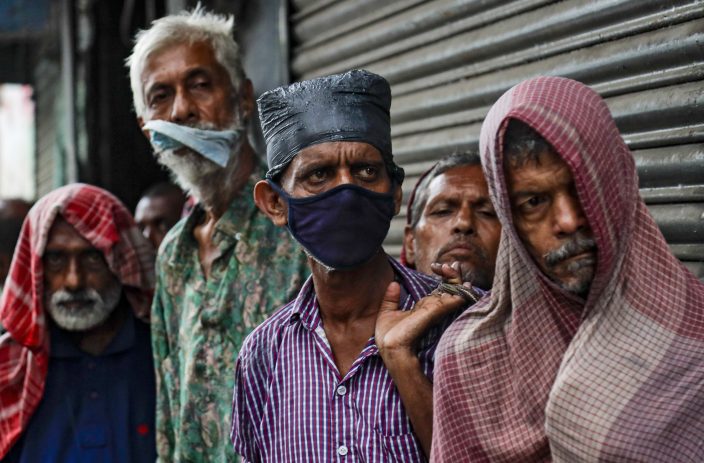 People, who are poor and homeless, wait outside the Missionaries of Charity, the order founded by Saint Teresa, to get food on her birth anniversary in Kolkata, India, Wednesday, Aug. 26, 2020. Nobel Peace Prize winner Mother Teresa, was a Catholic nun who spent 45-years serving the poor, the sick, the orphaned, and the dying. (AP PhotoBikas Das) 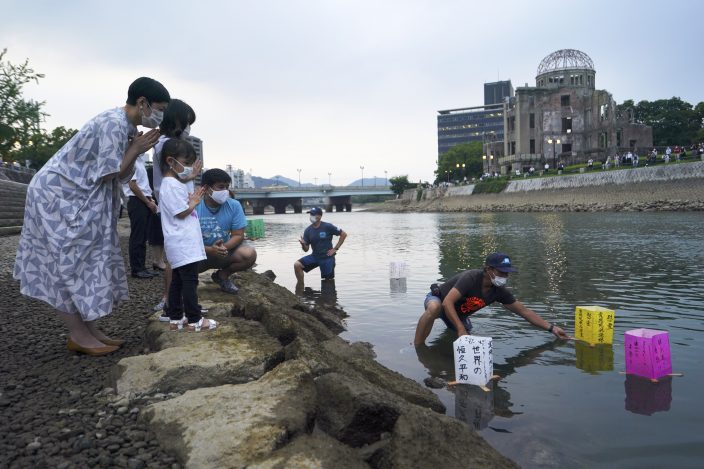 People pray as paper lanterns float along the Motoyasu River in front of the Atomic Bomb Dome, Aug. 6, 2020, in Hiroshima, western Japan. Japan marked the 75th anniversary of the atomic bombing of Hiroshima. The official lantern event was canceled to the public due to coronavirus but a small group of local representatives released some lanterns. (AP PhotoEugene Hoshiko)

AP PHOTOS: As pandemic rages, the faithful mourn, carry on

AP PHOTOS: From memorial to protest, the power of prayer