The Lebanese military discovered more than 4 tons of ammonium nitrate near Beirut's port on Thursday, a find that's a chilling reminder of the horrific explosion a month ago that killed 191 people.

According to the military, army experts were called in for an inspection and found 4.35 tons of the dangerous chemical in four containers stored near the port. There were no details on the origin of the chemicals or their owner,

The find comes almost exactly a month after nearly 3,000 tons of ammonium nitrate stored at Beirut’s port for six years detonated, wreaking death and destruction. Along with 191 people killed, more than 6,000 were injured and entire neighborhoods were devastated. The blast left nearly 300,000 people homeless and caused damage worth billions of dollars. 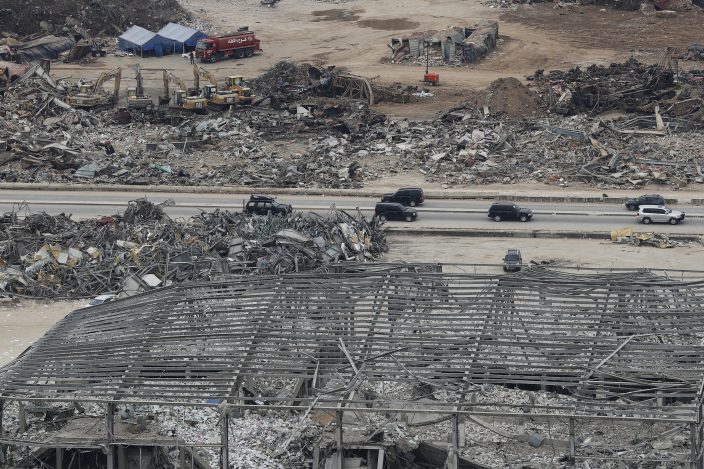 The convoy of French President Emmanuel Macron arrives at the site of the Aug. 4 explosion that hit the seaport, in Beirut, Lebanon, Tuesday, Sept. 1, 2020. Macron is visiting Lebanon to press the country's political leaders to chart a new path for Lebanon, ending years of corruption and mismanagement. (AP PhotoHussein Malla)

The military statement said that customs officials had called in the army to inspect containers at a facility near the port, where they found 4.35 tons of ammonium nitrate. It said army experts were “dealing with the material," an apparent reference that it was being destroyed.

Days after the Aug. 4 blast, French and Italian chemical experts working amid the remains of the port identified more than 20 containers carrying dangerous chemicals. The army later said that these containers were moved and stored safely in locations away from the port.

French experts as well as the FBI have taken part in the investigation into the Aug. 4 blast, at the request of Lebanese authorities. Their findings have yet to be released.

So far, authorities have detained 25 people over last month's explosion, most of them port and customs officials.