Three weeks after the humiliating loss to Bayern Munich in the Champions League quarterfinals, Barcelona is still mired in crisis and surrounded by uncertainty over the future of Lionel Messi.

Will the Argentina forward leave? Will the rest of the squad be revamped as promised by the new coach? Will the embattled president resign?

Barcelona still hasn’t fully recovered from the 8-2 loss on Aug. 14, and there are few signs that the club is close to getting back on track a few weeks from the start of the new season. 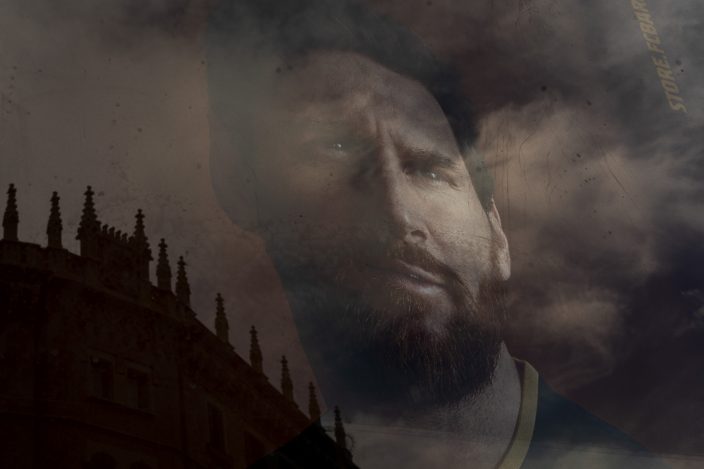 A poster of Barcelona soccer player Lionel Messi is reflected in a window of a F.C Barcelona store in Barcelona, Spain on Tuesday, Sept. 1, 2020. Barcelona is banking on a face-to-face meeting with Lionel Messi to try to convince him to stay. Talks with Messi’s father-agent are expected this week in Barcelona but the club also hopes to sit down with the player himself. (AP PhotoEmilio Morenatti)

The club’s focus now is on trying to get Messi to change his mind about leaving. The Argentine great last week told Barcelona he wanted to leave for free but the club told him he has to stay until his contract ends in June 2021.

The sides are at an impasse and the club’s future is on hold.

President Josep Bartomeu and incoming coach Ronald Koeman said the team’s restructuring project revolved around Messi. Convincing him to stay is key to helping lift the club out of one of its worst crises ever.

But there was no agreement after Bartomeu met with Messi’s father for the first time on Wednesday. Jorge Messi did not dismiss the possibility that his son may reconsider his decision, so there was hope within the club.

No other meetings have been officially scheduled, though, and if Messi doesn't change his mind, a lengthy legal battle could ensue, further hurting Barcelona’s restructuring process. The club will start its season against Villarreal in the Spanish league at the end of the month.

It also remained unclear what would happen to the rest of the squad after “profound” changes to the first team were announced by Bartomeu and Koeman.

Koeman said he wouldn't count on some key players anymore, including Ivan Rakitic, Arturo Vidal and Luis Suárez, a longtime Messi friend and possibly one of the reasons why he asked to leave. But so far only Rakitic has left to rejoin Sevilla, while the others continue to train normally along with the rest of the squad.

Antoine Griezmann, who struggled in his first season since joining from Atlético Madrid, could end up with greater responsibility along with veterans Gerard Piqué and Sergio Busquets — if they also stay. Youngsters Ousmane Dembele, Ansu Fati, Riqui Puig and newly signed Francisco Trincão could end up having bigger roles as well.

There is talk about Koeman wanting to bring in new players such as Lautaro Martínez, Memphis Depay and Georginio Wijnaldum, but their transfers could ultimately also depend on what happens to Messi. His departure could save a lot of salary money, but if it’s a free transfer it could end up hurting the team’s finances.

Messi invoked a clause that allowed him to leave for free at the end of the season, but Barcelona said the clause expired in June. Messi’s representatives claimed he could still leave because the season was pushed back by the coronavirus pandemic.

Bartomeu has been under pressure recently and Messi has been an outspoken critic of some of the club’s decisions during the season, its first without a title since 2007-08. The season included a coaching change and exchange of public accusations between players and some club directors. New elections have been called for next March, and Bartomeu offered to resign if he was the reason Messi wanted to lave.

But so far no word from Messi on anything, and as he keeps quiet, Barcelona keeps reeling.

Messi back in Barcelona squad for Copa del Rey match

Barcelona: Messi will miss Eibar game due to ankle injury

Koeman praises Messi for making call for unity at Barcelona

Lionel Messi back training with rest of Barcelona squad

Messi back to training after decision to stay with Barcelona