Cam Newton has been a starting quarterback for his entire nine-year NFL career. He'll remain one with the Patriots, an opportunity he says he's not taking for granted.

It's been five months since Newton was released by the Carolina Panthers after back-to-back seasons disrupted by injuries. It's also been just a little over a month since the Patriots threw the 2015 league MVP a lifeline in free agency that 30 other teams in the league declined to offer.

It's why he said officially being chosen as Tom Brady's successor as well as a captain in New England during a team meeting on Thursday came with emotions he has trouble explaining. 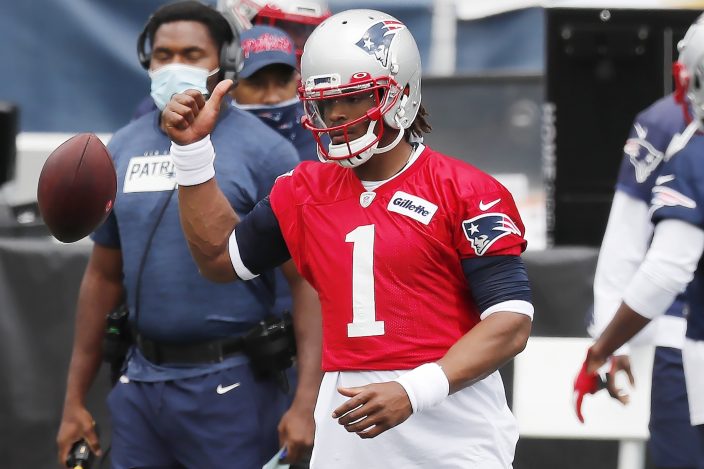 “I’ve had a plan since I’ve been here just to become the best player I can possibly be,” Newton said Friday. “Be coached and be coachable, knowing that I will be coached by the game’s finest in (offensive coordinator) Josh McDaniels and (quarterbacks) coach Jedd (Fisch) as well as, obviously, coach (Bill) Belichick. Those guys haven’t let me down yet. I just try to be of service in any way shape or form I possibly can be. Anything that they asked of me to do, it’s my job to do it.”

That job will now be to lead an offense and team that will look dramatically different without Brady, the franchise's fixture at quarterback for two decades.

Newton said he's approached the task of being Brady's successor by following the lead of the veterans who played alongside him. As far as the new dynamic he hopes to bring, Newton said he wants that to stay secret for now.

Newton appeared in only two games for the Panthers last season before being placed on injured reserve with a broken bone in his foot, which required surgery. He also had surgery to repair a torn rotator cuff in his throwing shoulder before the 2019 season.

He only missed one training camp practice this month and that was because of personal reasons. So far he hasn't showed any outward signs of discomfort. Newton said he will let his play be the ultimate judge of his health.

“We’re just going to have to see,” Newton said. “Nothing that I say right now that it would make sense until we see it.”

For his part, Belichick said any concerns the coaching staff might have had have been answered.

“He’s certainly been a durable player,” Belichick said. “The injury last year was one of those foot/ankle injuries that we’ve seen take down players. ... He’s been out there every day and able to participate in everything. He’s healthy and it looks like he’s ready to go. But it’s a long season and anything could happen to anybody. We all know that, so we will see how it goes.”

Those unknowns are also what are driving Newton right now.

He's playing this season on a one-year, incentive-laden contract that will pay him a base salary of $1.05 million. It's a humble deal for a player coming off a five-year, $103.8 million contract in Carolina.

“I’m a realist, right? And I think being in the position that I’m in right now, I understand it. I have a lot to prove," Newton said. “And I want to challenge the coaches, as well as coach Bill, to push me to if whatever sees fit for me to be better. I want to work on it. And with that being said, I know with what I have to prove, nothing will ever exceed my expectations for myself.”

He said his brief time working with Belichick has already taught him a lot.

“If anything, you gain to even appreciate his greatness even more,” Newton said. “He’s an unbelievable teacher of the game. And I think that’s not highlighted enough, especially from a person of his caliber and status. ... It’s a common theme that you get the job done or if not, they’re going to find somebody to get the job done. And with that type of mantra with him, he knows that he’s going to put everybody in the best position for them to succeed.”