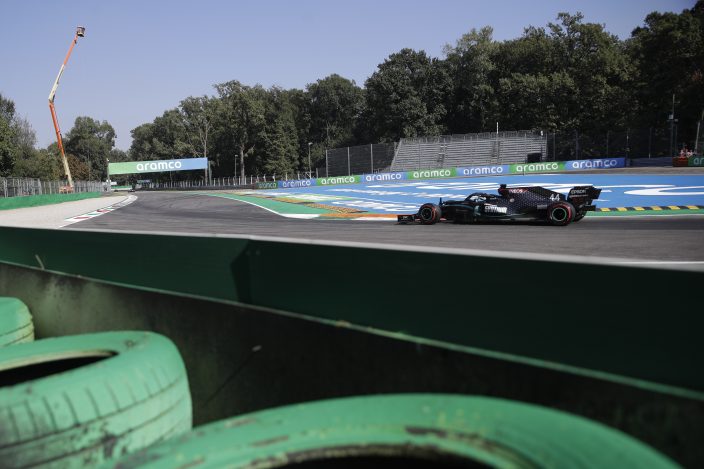 ELECTION 2020-RUSSIA-RACE — Tensions in the United States over racism and policing are a probable target for American adversaries trying to influence the November election, according to lawmakers and experts, and there are signs that Russia is again seeking to exploit the divide. Some lawmakers say the Russian efforts are more sophisticated than four years ago and that the Trump administration’s decision to limit what it tells Congress about election threats will allow the propaganda to spread. By Mary Clare Jalonick. SENT: 990 words, photo.

ELECTION 2020-PERMISSION STRUCTURE — President Donald Trump’s campaign is trying to find a way to help disenchanted voters feel comfortable voting for him again despite their reservations about him personally. The goal is to humanize Trump and demonize Democratic nominee Joe Biden so that these voters, particularly women and suburbanites, feel that they can vote for Trump again anyway. By Jonathan Lemire. SENT: 980 words, photos. 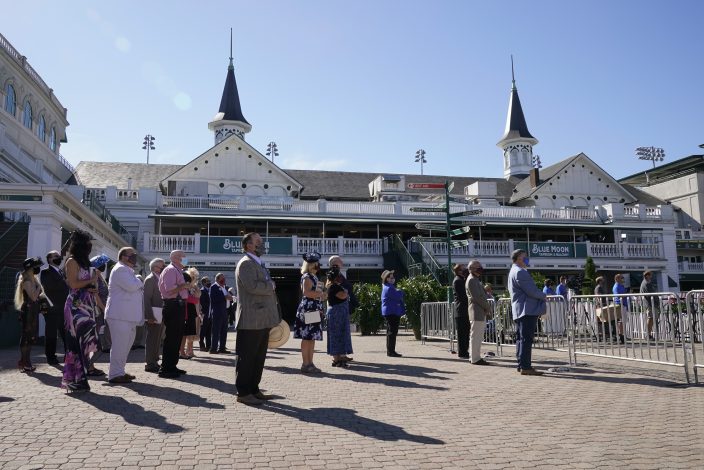 Guest stand during the nation anthem before the 146th running of the Kentucky Derby at Churchill Downs, Saturday, Sept. 5, 2020, in Louisville, Ky. (AP PhotoCharlie Riedel)

ELECTION 2020-NEW-WAYS-TO-VOTE — Voting will look a little different this November. States are turning to stadiums, drive-thrus and possibly even movie theaters as safe options for in-person polling places amid the coronavirus pandemic and fears about mail-in ballots failing to arrive in time to count. By Sophia Eppolito. SENT: 780 words, photos.

VIRUS OUTBREAK — With the coronavirus spreading through colleges at alarming rates, universities are scrambling to find places to isolate the thousands of students who have caught COVID-19 or been exposed to it. Some schools are designating COVID-19 dorms, others are sending infected students home and some schools have decided to scrap or postpone in-person learning until they can figure out how to keep infection rates at acceptable levels. By Pat Eaton-Robb and Jeff Amy. SENT: 1,000 words, photos.

VIRUS OUTBREAK-WORKING MOTHERS — Research is increasingly pointing to a retreat of working mothers from the U.S. labor force as the pandemic leaves parents with few child care options and the added burden of navigating distance learning. By Alexandra Olson and Cathy Bussewitz. SENT: 1,300 words, photos. This is the Sunday Spotlight.

Find more coverage on the Virus Outbreak on the featured topic page in AP Newsroom and below.

VIRUS OUTBREAK-FAITH TESTED - The COVID-19 pandemic is testing the patience of some religious leaders across Africa who worry they will lose followers, and funding, as restrictions on gatherings continue. Some evangelical Christian leaders in Uganda have launched a campaign with the now-universal phrase of protest: “I can’t breathe.” SENT: 1,000 words, photos.

VIRUS OUTBREAK-REFUGEE-STUDENTS — Staying connected during the coronavirus pandemic has been trying for parents and students at a Phoenix school for refugees who speak more than a dozen languages. SENT: 900 words, photos.

VIRUS OUTBREAK-SUMMER-WITHOUT-FAIRS — Among the many summertime traditions being hit hard by the coronavirus are the nation’s county and state fairs. The International Association of Fairs and Expositions says about 80% of the fairs have been canceled or scaled down this year. SENT: 800 words, photos.

VIRUS OUTBREAK-SPAIN-SEASIDE THERAPY - A hospital in Barcelona is seeing if short trips to the beach can help COVID-19 patients after long and traumatic stays in intensive care units. It’s part of a program to “humanize” ICUs. Since restarting it in June, doctors have noticed that even 10 minutes at the beach seems to improve a patient’s well-being. SENT: words, photos.

VIRUS OUTBREAK-BRAZIL-FRIGHT NIGHT — A horror theme park in Brazil, closed because of the pandemic, reopened with a change aimed at preventing the spread of the new coronavirus: people enjoy the scary entertainment without getting out of the car. SENT: 270 words, photos.

VIRUS OUTBREAK-POPE — Pope Francis is next month set to make what would be his first visit outside Rome since Italy was put under lockdown in early March when it became the first country in Europe to feel the full brunt of the coronavirus pandemic. SENT: 400 words, photo.

FATAL-FIRE-PHILADELPHIA — Authorities say after a row home fire in Philadelphia that it appears four people are dead. SENT: 130 words.

AUSTRIA-ICE CUBE RECORD — An Austrian man has beat his own record for the longest full body contact with ice cubes: just over 2 1/2 hours. SENT: 210 words,

TODDLER KILLED-LOUISIANA - Police in Louisiana say a toddler was fatally shot while riding in a vehicle along a Louisiana road. SENT: 190 words, photos.

ELECTION 2020-HARRIS — It’s been a mostly virtual campaign for Kamala Harris in the three weeks since the California senator became the Democratic vice presidential nominee. But that’s about to change. Harris plans to visit Milwaukee on Monday on her first traditional campaign stop since joining the ticket. SENT: 970 words, photos.

TRUMP-RUSSIA PROBE-FBI —- A former FBI agent who was fired because of derogatory text messages about Donald Trump writes in a new book that he believes the president has been compromised by Russia. Peter Strzok’s book traces his career from respected counterintelligence agent to the man who came to embody Trump’s scorn of the FBI and his characterization of the Russia probe as a “witch hunt.” SENT: 960 words, photos.

FACT-CHECK-WEEK — President Donald Trump said he never called John McCain a loser — he did — and denigrated the record of the late Republican senator on veterans affairs despite routinely appropriating one of McCain’s crowning achievements on that front as his own. Trump distorted events in Kenosha, Wisconsin, over the past week and his own hand in them. Democratic rival Joe Biden claimed to have been the first person to have called for the use of emergency production powers in the pandemic, when he was not. By Calvin Woodward and Hope Yen. SENT: 1,550 words, photos. Find AP Fact Checks at https://apnews.com/APFactCheck

BELARUS-PROTESTS — Thousands of women marched through the capital of Belarus, calling for the resignation of the country’s authoritarian president. SENT: 490 words, photos.

ASIA-TYPHOON - A powerful typhoon, the second in a week, is barreling toward the Okinawa islands in southern Japan, prompting warnings about torrential rainfall and fierce wind gusts. SENT: 310 words, photos.

SUDAN-FLOODING — Sudanese authorities have declared their country a natural disaster area and imposed a three-month state of emergency across the country after rising floodwaters and heavy rainfall killed around 100 people and inundated over 100,000 houses since late July. SENT: 400 words, photos.

AFGHANISTAN-PEACE-TALKS — Taliban officials say a senior delegation has returned to Qatar, paving the way for the start of peace talks with the Afghan government that are expected to take place in the tiny Gulf state. SENT: 400 words, photo.

RWANDA-HOTEL RWANDA-ARREST — Supporters of the man portrayed in “Hotel Rwanda” say Rwandan authorities have denied a lawyer access to Paul Rusesabagina nearly a week after the outspoken government critic was paraded in handcuffs and accused of terrorism. SENT: 500 words, photo.

NIGER-DISAPPEARANCES — A new watchdog report alleges that Niger’s army is responsible for the disappearance of more than 100 people in the western part of the country late last year. The National Commission for Human Rights spent months investigating the civilians’ disappearance in Inates zone in the Tillaberi region. SENT: 200 words, photos.

FRANCE-ATTACKS-TRIAL — The fugitive widow of the Islamic State killer who plotted attacks against the Charlie Hebdo satirical newspaper and a kosher market calls home to France once a year to catch up, her sisters testified, offering new details about one of the world’s most wanted women. SENT: 700 words, photos.

FRANCE-RIGHT TO DIE — Facebook has blocked live broadcasts from a chronically ill bed-ridden man who appealed to French President Emmanuel Macron for a medically-assisted death and who wanted to show what he expects will be a painful end to his life after he announced that he was stopping all food and drink. SENT: 460 words.

PORTLAND-PROTESTS — Police in Portland, Oregon, issued a statement saying some officers reported that rocks, a full beverage can and water bottles had been thrown at them, prompting police to declare a Friday night protest an unlawful assembly. Officers arrested 27 people. The city this weekend reaches 100 straight nights of protests marked by vandalism and violence. SENT: 480 words, photos.

RACIAL INJUSTICE-POLICE SHOOTING - A white Tulsa police officer has been indicted on charges of shooting a Black man during a traffic stop in March. SENT: 400 words.

ROCHESTER-POLICE DEATH - Protesters after the death of Daniel Prude at the hands of police in Rochester, New York, are demanding more accountability for how it happened and legislation to change how authorities respond to mental health emergencies. SENT: 340 words, photos, video.

VIRUS-OUTBREAK-SMALL BUSINESS-TAX DEFERRALS — As employees of small businesses get their first September paychecks, they’re probably receiving their usual amount — company owners are still withholding money for Social Security despite a presidential order allowing the tax to be deferred. SENT: 650 words.

AP EXPLAINS-THE NATIONAL DEBT — The U.S. government’s war against the coronavirus is imposing the heaviest strain on the Treasury since America’s drive to defeat Nazi Germany and imperial Japan three-quarters of a century ago. The Congressional Budget Office has warned that the government this year will run the largest budget deficit, as a share of the economy, since 1945, when World War II ended. Next year, the federal debt — the sum of the year-after-year gush of annual deficits — is forecast to exceed the size of the entire American economy. SENT: 1,000 words, photos.

ITALY-VENICE-FILM-COPPOLA — Coronavirus lockdowns have kept most U.S. filmmakers and actors away from the Venice Film Festival. But Gia Coppola and Maya Hawke have brought a bit of today’s America to the Lido with “Mainstream,” a skewering look at YouTube and influencer culture. SENT: 400 words, photos.

RAC--KENTUCKY DERBY -- Tiz the Law is the overwhelming favorite against 15 rivals in the 146th Kentucky Derby, delayed four months and being run without fans for the first time because of the coronavirus. UPCOMING: 800 words, photos. Post time 7:01 p.m.

BKN—RAPTORS-CELTICS -- The champion Toronto Raptors, saved at the buzzer from going into a 3-0 hole, can tie their series with the Boston Celtics in Game 4 of the Eastern Conference semifinals. UPCOMING: 700 words, photos. Game starts 6:30 p.m.

HKN--ISLANDERS-FLYERS — The Philadelphia Flyers have won two straight in overtime to force a decisive Game 7 in the second round against the New York Islanders. The winner gets the Tampa Bay Lightning in the Eastern Conference finals. UPCOMING: 750 words, photos. Game starts 7:30 p.m.

FBC--VIRUS OUTBREAK-GETTING TO KICKOFF -- Ordinarily, this would have been a weekend full of college football. Now it’s mostly empty, reduced to a handful of games -- Houston Baptist-North Texas among them. The hit was particularly hard on the FCS, where only 15 of 127 teams have any games at all. UPCOMING: 700 words, photos by 3 p.m. with updates.