Adam Wainwright pitched six-hit ball into the seventh inning, and the St. Louis Cardinals beat the Chicago Cubs 4-2 on Saturday in the first game of a doubleheader.

Wainwright allowed two runs, struck out six and walked one while improving to 4-0 for the first time in his career. The 6-foot-7 right-hander tossed a four-hitter in a 7-2 victory over Cleveland on his 39th birthday in his previous start.

Paul DeJong drove in two runs for St. Louis, which had dropped two in a row. Kolten Wong had two hits and scored twice. 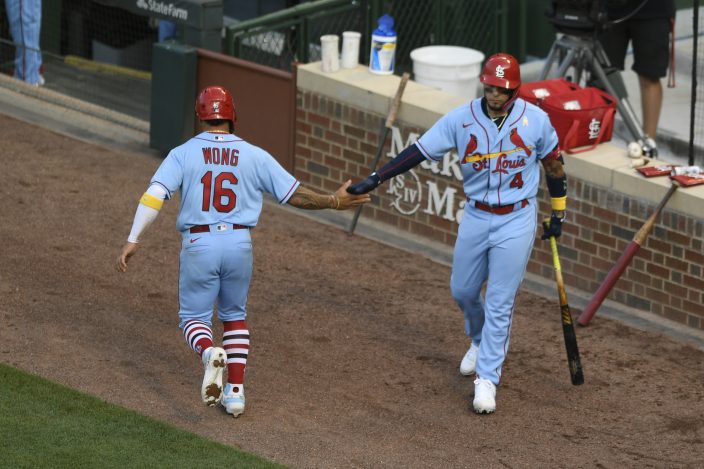 St. Louis Cardinals' Kolten Wong (16) celebrates with teammate Yadier Molina (4) after scoring on a Paul DeJong single during the fourth inning of a baseball game against the Chicago Cubs, Saturday, Sept. 5, 2020, in Chicago. (AP PhotoPaul Beaty)

Chicago had won four of five. The NL Central leaders had one last chance in the seventh, putting two runners on with two out, but Giovanny Gallegos struck out Anthony Rizzo to finish his third save.

Ian Happ homered twice, but the rest of the Cubs lineup came up empty. Happ started in center field after he missed the series opener with a right eye contusion. He was struck by a foul ball after it bounced off the plate on Thursday in Pittsburgh.

Chicago loaded the bases with none out in the second and failed to score. Wainwright struck out Steven Souza Jr., got Nico Hoerner to line out to second and retired Happ to end the inning. Chicago Cubs' Kyle Schwarber reacts after striking out during the sixth inning of a baseball game against the St. Louis Cardinals, Saturday, Sept. 5, 2020, in Chicago. (AP PhotoPaul Beaty) 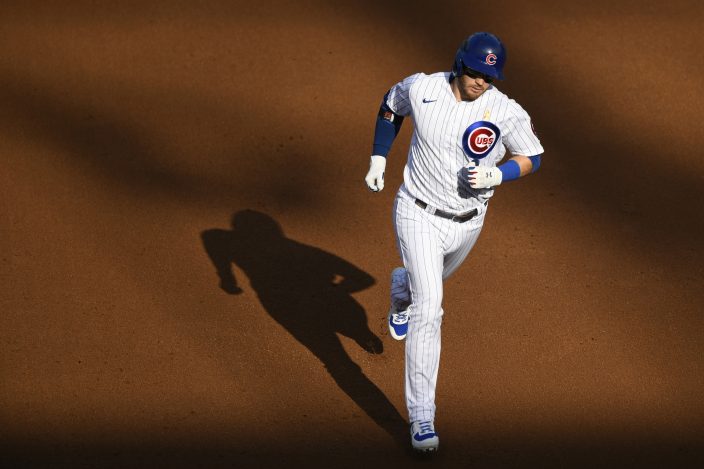 Chicago Cubs' Ian Happ rounds the bases after hitting a solo home run during the first inning of a baseball game against the St. Louis Cardinals, Saturday, Sept. 5, 2020, in Chicago. (AP PhotoPaul Beaty)