Evan Longoria and Darin Ruf launched back-to-back home runs in the second inning and the Giants spoiled Madison Bumgarner’s return to San Francisco with a 4-3 win over the Arizona Diamondbacks on Saturday night.

Bumgarner (0-4) came off the injured list to make his first start in nearly a month after recovering from a mid-back strain. The left-hander allowed two earned runs on three hits in four innings, striking out two and walking a pair in his first-ever appearance against his former team.

“I can find a lot of positive stuff about it for me,” Bumgarner said. “I feel pretty good about it, where we’re at. I made more than one mistake, but there’s one that cost me, to Longoria, I threw it about where I wanted to do. I was debating whether to throw that cutter up and in or down and in. Obviously now looking back I should have gone with the down and in option.” 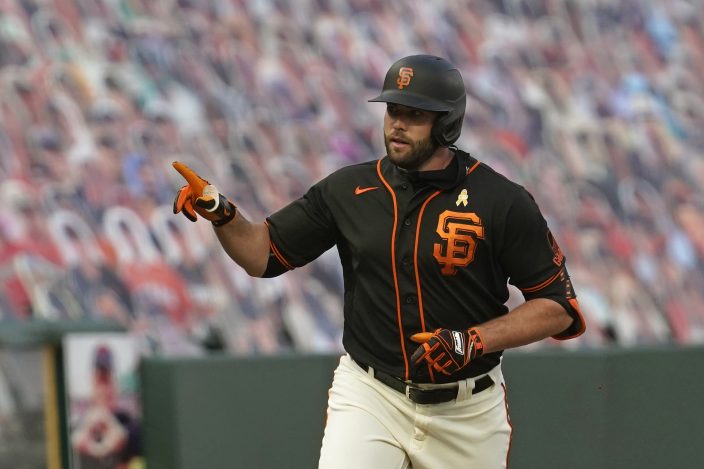 Added Diamondbacks manager Torey Lovullo: “I thought he had a good mixture of pitches, maybe missed a couple of them, and you give up a couple of solo home runs. That’s part of the game. But I think we’re going to see him build off what he did today.”

Bumgarner spent his first 11 seasons with the Giants, winning three championships and the 2014 World Series MVP. His 119 wins are third-most in San Francisco history and his 1,794 strikeouts rank second. He signed an $85 million, five-year contract with the Diamondbacks during the offseason.

“It felt good just to be back in a big league game, even as different as it is this year,” Bumgarner noted. “But I was just excited to be back out there and see the stuff starting to pick up a little bit for me, even if it’s marginal. But we’re trending in the right direction, I guess, with the stuff and the way I felt, making pitches. So I was pretty happy about it.” 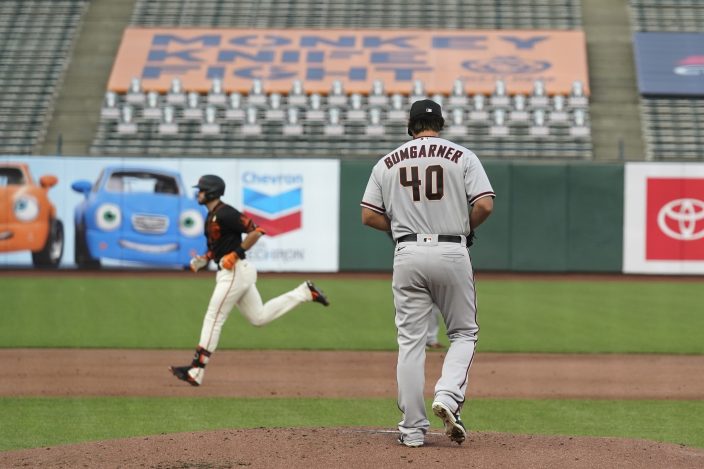 Giants starter Trevor Cahill, who pitched for Arizona from 2012-14, only lasted 2 2/3 innings, giving up one earned run on two hits and two walks. The right-hander exited his last start with left hip discomfort, but his MRI the following morning came back clean.

“We were going to monitor his hip closely during that outing,” Giants manager Gabe Kapler explained. “We knew that it was going to be a shorter outing. We didn’t necessarily anticipate it being that short, but he wasn’t especially crisp and looked a little bit more like the version of Trevor Cahill later in his last start. He’s OK. He came out fine. We don’t have health concerns about it.”

Longoria and Ruf connected for the Giants’ first set of consecutive homers this year. Joey Bart and Mauricio Dubón added consecutive RBI triples in the sixth to give San Francisco a 4-1 lead. 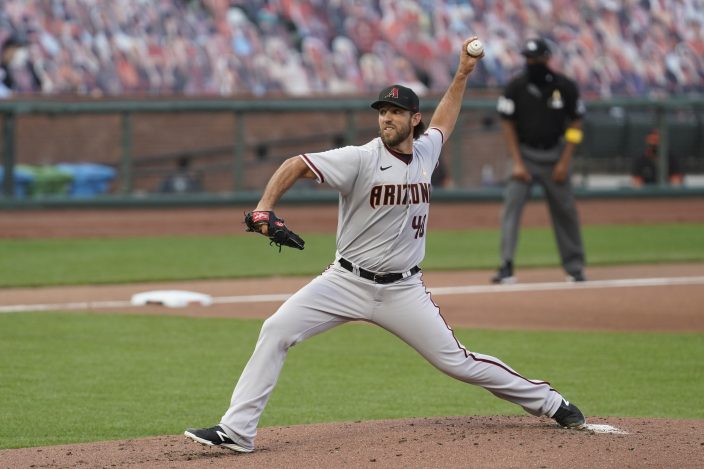 Daulton Varsho hit his first career home run, sending a drive into McCovey Cove in the seventh to bring the Diamondbacks within 4-2. Arizona climbed within one in the eighth when Eduardo Escobar singled home Ketel Marte, but Sam Selman struck out Josh Rojas to strand two runners in the eighth.

Caleb Baragar (4-1) pitched 1 1/3 scoreless innings and was credited with the win. Tony Watson, the eighth Giants pitcher, recorded a perfect ninth inning to earn his first save since 2017.

“Certainly every game is really big at this point,” Kapler said. “We’ll start to treat them with that level of urgency. I think you’re just seeing us manage games a little bit more aggressively right now.” 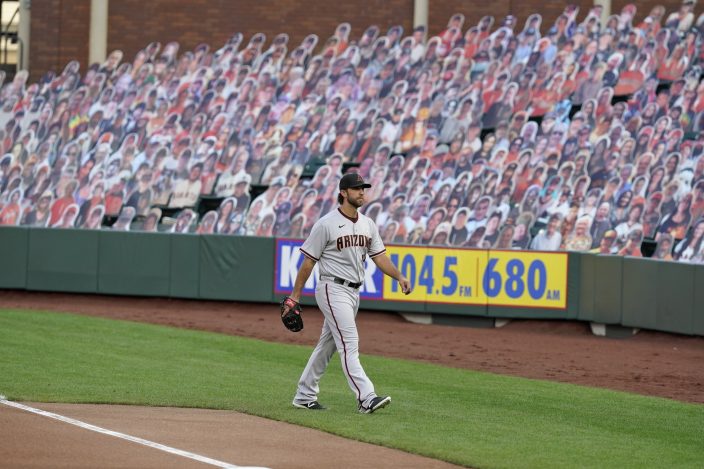 Arizona Diamondbacks starting pitcher Madison Bumgarner walks from the bullpen to the dugout before the team's baseball game against the San Francisco Giants on Saturday, Sept. 5, 2020, in San Francisco. (AP PhotoEric Risberg)

San Francisco improved to 6-2 against the Diamondbacks this season, outscoring them 39-23.

Diamondbacks: LHP Caleb Smith (COVID-19) was scheduled to throw in an alternate training camp game Saturday but experienced some mid-body soreness. “We decided to kind of back him out and evaluate him day-to-day,” Lovullo said. “It’s not a huge setback for us right now. I think in the next couple of days we’ll make the decision at the alt site when he jumps back in there and has that outing. Just being cautious right now with somebody we feel like is very important to us.” 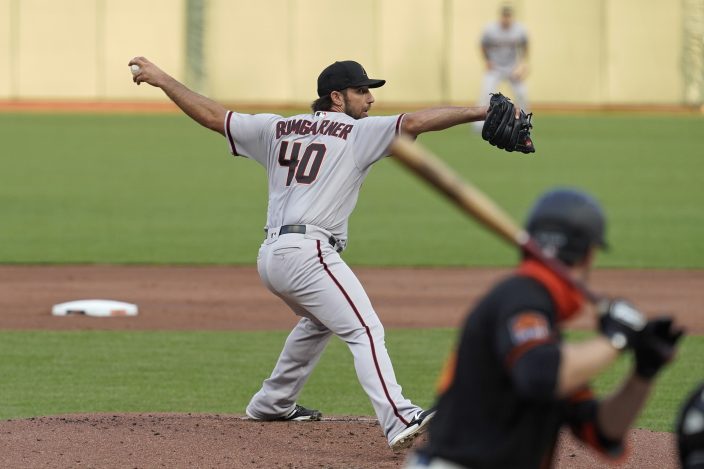 Giants: OF Austin Slater (strained left groin and flexor strain in right elbow) was reinstated from the 10-day IL and served as the designated hitter, going 0 for 5 in the leadoff spot. He is not yet available to play in the outfield due to the elbow soreness. “We’ll keep looking at that day-to-day,” Kapler said. “It’s improving and getting better every single day, but we’re going to wait for that final green light where we know he’s going to be safe.” ... RHP Jeff Samardzija (inflammation in right shoulder) and LHP Drew Smyly (sprained left index finger) each threw approximately 50 pitches in three-inning simulated games. Both threw all of their pitches and came out feeling healthy. The Giants will determine their next step in the coming days.

Diamondbacks: Optioned INF Andy Young to their Scottsdale alternate site to make room for Bumgarner on the active roster.

Giants: Optioned OF Steven Duggar to their Sacramento alternate site to clear a roster spot for Slater.

RHP Johnny Cueto (2-0, 4.75 ERA) will make his second straight start against Arizona. He allowed just one run on three hits in 6 2/3 innings last time out, striking out six. LHP Alex Young (1-2, 4.50 ERA) will face the Giants for the fourth time in his career. He went 2-1 with a 4.11 ERA in three starts against San Francisco last season.