The death toll from the coronavirus in Israel has surpassed 1,000, as the government on Sunday mulled steps for imposing new restrictions to quell a resurgence in infections.

Israel had earned praise for its early handling of the virus crisis and imposing tight movement restrictions. Since reopening the economy in May, however, new cases have spiked to record levels and the government has been blamed for mismanaging the resurgence. Weekly protests against Prime Minister Benjamin Netanyahu over his corruption trial have expanded to include demonstrations against his handling of the health crisis and the resulting economic pain.

More than 3,000 new cases a day have been confirmed in the most recent spike, raising the specter of a renewed nationwide lockdown. 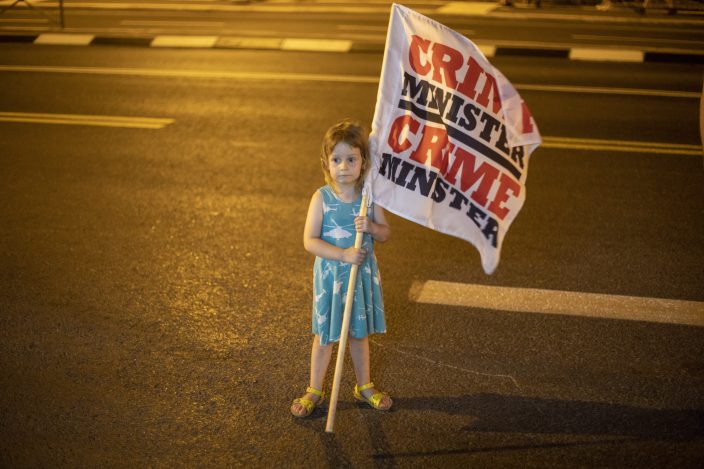 A girl holds a flag during a protest near the square outside Israeli Prime Minister Benjamin Netanyahu's residence in Jerusalem Sunday, Sept. 6, 2020. Thousands of Israelis gathered outside the prime minister's official residence in Jerusalem on Saturday despite record levels of coronavirus infections, calling on Benjamin Netanyahu to resign because he is on trial for corruption charges. (AP PhotoAriel Schalit)

Gamzu has issued recommendations for restrictions on numerous so-called “red” cities that have seen the most widespread outbreaks. Several Arab towns and ultra-Orthodox Jewish neighborhoods have been hit especially hard and are expected to be included in the list.

The government is expected to convene Sunday to vote on which cities and neighborhoods could go under some form of lockdown. Those included will likely face new restrictions on movement within the city limits, a ban on entering or leaving the locality and a suspension of all in-person school activities.

Upon Gamzu's recommendation, the military established a task force last month to bring the outbreak under control. Its main responsibility is taking the lead in contact tracing and breaking chains of infection.

Israel appeared to be a model of crisis management in the spring, when the coronavirus first appeared locally. Authorities quickly sealed the country's borders and imposed tough lockdown measures, bringing the number of new infections down to several dozen a day in May.

Officials have since been blamed for reopening businesses and schools too quickly. Throughout the summer, the rate of new cases has remained at record levels, while the death toll has steadily climbed to more than 1,000 people.